JRPGs are both loved and scorned for their reliance on time-tested (or, depending on your perspective, worn out) gameplay mechanics and storytelling tropes. The setup usually looks like a group of kids and/or rebellious go-getters on a mission to stop some world-destroying force that no one else can seem bothered to do anything about. Meanwhile, as your party carries the weight the world on its shoulders, the residents you meet along the way often maintain a whimsical sense of charm, even in the face of near-certain annihilation. Along the way, the player encounters a few massive plot twists while leveling up their ragtag bunch of freedom fighters. Rinse, wash and repeat.

This familiar formula is commonly critiqued. Personally though, I’m in favor of JRPGs sticking with what works. While I can’t make time to play too many of them each year, once I start one, I’m usually in it for the long haul. It doesn’t matter if the game is new or old, nor whether I have any nostalgic attachment toward a particular title. There’s something about the familiar rhythms of their worlds and mechanics that rarely fails to draw me in for a solid 50+ hours. Even when I know I could finish five other games in my backlog in the same time, with a solid RPG, I’m probably going all in until the end.

I’ve spent too much time thinking about why JRPGs stick with me even when more digestible genres can’t hold my attention, and I’ve narrowed it down to two things. First, I usually play games late at night after work, when strategic turn-based combat better fits my mental energy than anything fast-paced. Second, their text-heavy design is a solid alternative to reading books before bed and their stories are usually deep enough to keep me hooked. It doesn’t matter if I can guess at what’s around the corner, which is usually the case, since these stories tend to follow predictable tropes (at least 192 according to this shockingly well-curated list). Sometimes, there’s comfort in familiarity. 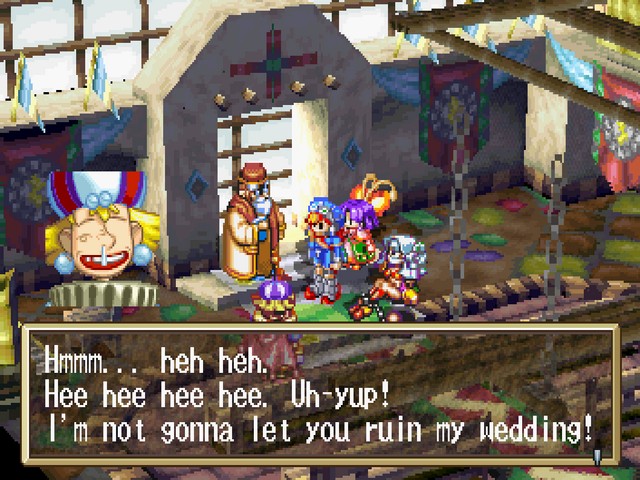 Some of those tropes and tired plot devices have aged more endearingly than others though, varying from weird at best, to openly problematic at worst. The damsel-in-distress dynamic, where an otherwise capable female character needs a male hero to rescue her from a generic bad guy, is one example. Another is their tendency for casting children in roles that obliterate all suspension of disbelief, sending teenagers off on quests to save the world, where nearly no one else decides to do anything to help.

There’s one particular scene early in the original 32-bit era Grandia (released as part of the Grandia HD Collection on Switch and PC) that embodies both of these plot devices in textbook fashion while also seeming strangely prophetic. Since playing through it a few months ago, it’s been stuck in the back of my mind, too. It’s not a profound segment, but it’s one that cuts to the core of some surprisingly relevant truths.

So, here’s the setup. In the town of New Parm, the corrupt president of an adventurer’s society named Mr. Pakon (who himself is a child) attempts to force the world-famous female adventurer Feena (who, again, is not an adult) into a forced marriage. It would be a grim scene if not for the game’s bright aesthetic and lighthearted tone (this game is effectively a cartoon), and it ends with justice being served, as the protagonist Justin (a pre-teen adventurer looking to live in his father’s footsteps) and his childhood friend Sue break into the church during the ceremony to free Feena from Pakon’s oafish clutches.

This sounds like typical role-playing fare, and for the most part, that’s exactly what it is. Despite being accomplished and well-respected around the world, Feena somehow needed a well-meaning yet amateurish boy to save her from another domineering boy, flexing power he didn’t earn to control a woman for his own untoward means. Maybe it’s not worth reading too deep into it, but even though this sort of thing isn’t out of place in these types of games (especially ones over two decades old), there’s still something somewhat shocking about an attempt at sexual entrapment being presented so nonchalantly within the context of what looks like family-friendly entertainment. 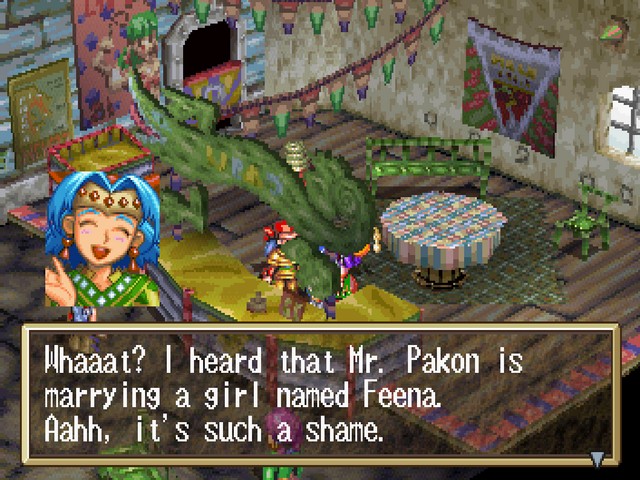 This scene has stuck in my head for one reason: classic villainous archetypes often tap into real threats. Pakon’s character isn’t complex, nor is he difficult to understand; he’s an entitled male who gets what he wants because no one stands up to him. He’s surrounded by people who could do something to stop his rise, but choose not to do so. It’s the same story of every awful man in history and it’s the story of every awful man making headlines right now. It’s the same story as Donald J. Trump, who has continued to hold office despite facing more than 20 credible accusations of sexual misconduct.

The fact that stories of the president’s sexual indiscretions have been brushed aside is a testament to the chaos of our current political moment and how our collective will to demand action has eroded to an insufficient level. The connections are coincidental and Grandia’s plot isn’t profound, but Pakon’s character illustrates some unflattering things about human nature and the decisions we all have to make when we’re confronted with abuse of power. Some will stand up and do something, but the silent majority will watch and wait for someone else to fix the problem (at least until it hits them personally).

I want to think I’m on the side that’s working to help. But as I reflect back on 2019, I’m not sure I’m actually doing enough. I’m not a total bystander to political action, I’m not a model activist, either. I’m also not into making resolutions, but by this time next year, I don’t want the question of whether I’ve done my part to still feel unresolved. Grandia didn’t lead me directly to some sort of life-changing revelation, but underneath its cartoon absurdity was a simple reminder that sometimes tropes need to be put to rest, and sometimes tired stories get that way because they tell us things we shouldn’t forget.