I’ll never forget  my sense of disbelief when North Dakota governor Doug Burgum campaigned on a promise to treat the citizens of my state “like the customers they are.” The Trump supporter and former tech entrepreneur ran on the idea that private sector success could supersede public sector experience at the ballot box, relying on an age-old conservative canard that businessmen can govern better than people with actual governing experience. We were told he’d reinvent government with intellect and industrial acumen, bringing innovation to the capitol (whatever that means).

Instead, what we’ve gotten are several corruption scandals, a new state logo his friend made in Microsoft Word (seriously, look at it) and a COVID-19 response plan that made the state the world’s worst hotspot for the virus (leading one former congressman to comment that “he has a record of failure unmatched in my lifetime in state leadership”). Rather than making government more responsive to the people, he has delivered a predictable preview of what full-bore corporate dystopia could look like, where public resources enrich private ambitions and basic services collapse under crisis.

The browser-based game Cyberpunkland, part of an interactive reporting series from The Verge, takes this concept of privatized “government” to its furthest logical conclusion. Billed as a “full-service dystopia simulator,” it delivers surprisingly smart satire, centered on issues (surveillance capitalism, rising street violence, the usurpation of state power by tech giants) that we can see playing out in real time today.

Cyberpunkland employs players as the Hospitality Manager of Blade City, a fictional resort operated by a corporation called Xoxl. It’s a place where people can escape from the sterility of life under late-capitalism and experience a “hip, gritty vacation,” rubbing shoulders with “hackers, hustlers and street fighters.” In order to succeed, the player must attract residents (or, should we say, customers) by increasing the city’s level of “grittiness,” while raising enough revenue to support its three regions: Night Alley, Chrometown and the Crystal Abattoir.

Players can choose to invest in R&D to enhance the city, keep gangs occupied (so they won’t “take up non-gritty pastimes like knitting or peacefully talking through their differences”), or add layers of Intrusion Countermeasures Electronics (ICE), which provides a security firewall that customers can try to hack for entertainment.

These actions cost currency called nanits, and in order to raise revenue, players will sometimes need to run ads. However, omnipresent advertising reduces the city’s grittiness (because it features real products from outside the simulation, like vaporized oxytocin, thus breaking the sense of immersion), so it’s crucial to balance the bottom line with an acceptable level of edginess. Losing citizens? Invest in drugs and weapons, which conveniently appear on the black market, where dealers can do business. Or consider provoking a gang war. You have lots of options and no legal constraints.

The more days pass, the darker the atmosphere grows in Blade City. The public services you’re able to add are typically nefarious, like modifying surveillance cameras to stream street fights via social media or launching a puppet competitor corporation to give Xoxl cover for corruption. Every choice is tied to a profit motive and devoid of moral considerations. If the market demands it, then nothing else matters. Those choices often reflect real-world problems that stem from the unintended consequences of putting profits ahead of people too.

For example, the way players are encouraged to leak illegal firearms onto the black market is a clear commentary on how lax gun laws in red states increase violent crime in neighboring blue states. Letting dangerous drugs run rampant because it makes money for the ruling class reflects the opioid crisis. Real-world measures to slow the spread of COVID-19 are often opposed on economic grounds, and it’s not a stretch to interpret calls for developing “herd immunity” as calls to develop a “grittier” society. 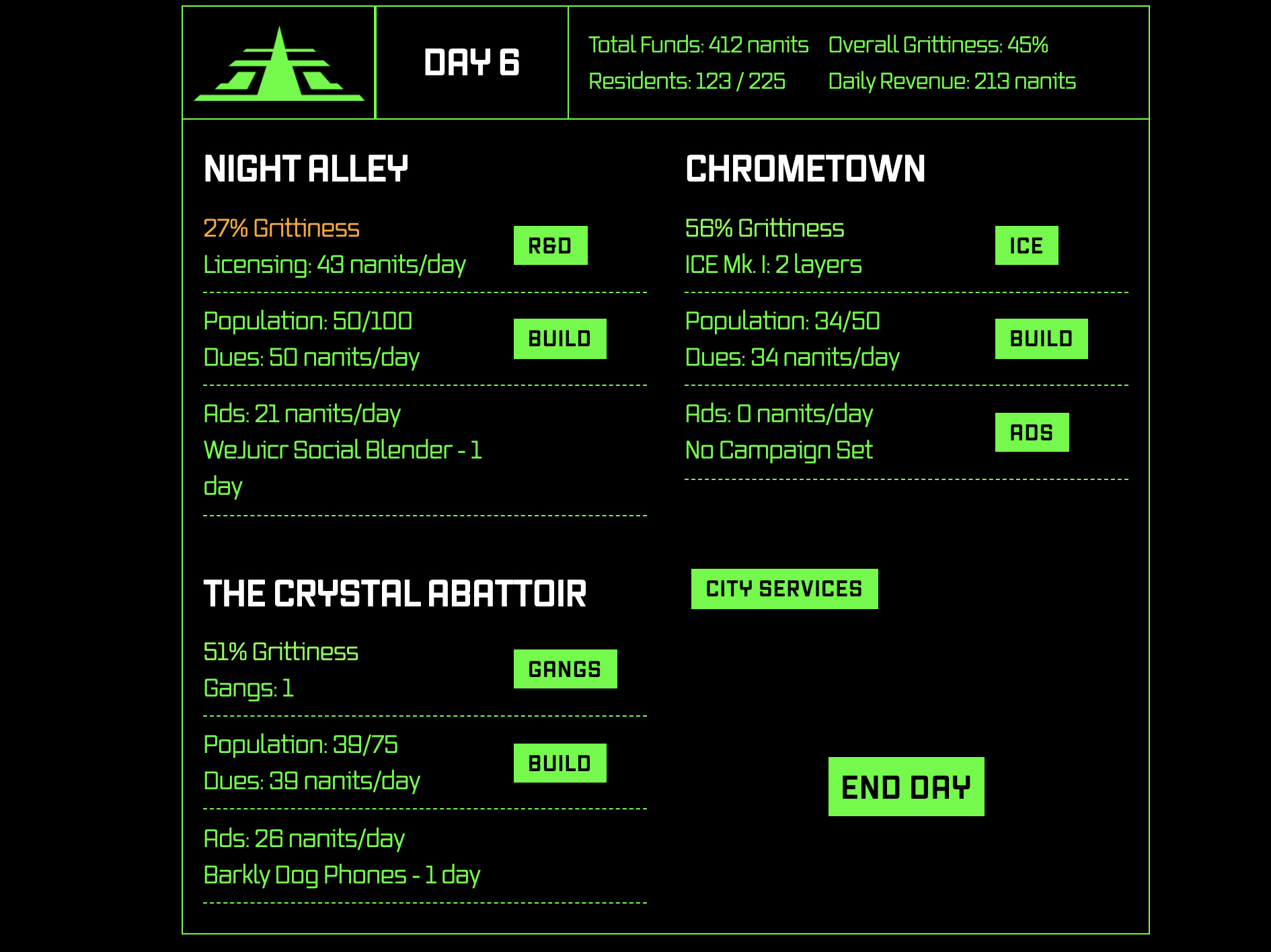 There are some less direct connections between Blade City’s privatized government and actual examples of corporations bending municipalities to their will. Wal-Mart has spent decades muscling cities into rewriting zoning ordinances to allow them to enter markets where they obliterate local businesses and eliminate the competition that capitalism needs to operate. Amazon has relied on the USPS so much that conservatives have suggested the mega-corporation should acquire it. The idea in either instance is that corporations can serve society better than government, so we should let them do it.

Cyberpunkland envisions a world where this belief has run amok , asking how things would be if governments didn’t care about anything other than raising revenue (and if government were run like a business, raising revenue would indeed be its only purpose). It’s easy enough to see the appeal in theory. If massive retailers can operate more efficiently and more profitably than government, then why not let them take over? Everyone loves convenience and no one loves bureaucracy. Seems like a win-win on the surface.

Except it leads to a world where society swallows itself and individual advancement erodes all sense of actual community. Cyberpunkland envisions a world where the human spirit rots underneath unchecked capitalism’s antiseptic sheen, so much so that people pay to act out the extreme libertarian fantasy of thriving in a world where everyone is out for themselves. When profits replace the public good, what’s left is a world where everything is transactional and “traditional” conservative moral values ironically have no place. Nothing is personal and everything is just business.

By showing what happens when laissez faire capitalism consumes everything in its path , Cyberpunkland revels in its inherent absurdity. “Running government like a business” should be an oxymoron, not something right-wing politicians can pay to say on television without being laughed off the campaign trail. So, if it sounds stupid to suggest that a browser game can show why we shouldn’t take this idea seriously, consider the fact that a Reddit group just exposed the ridiculousness of our entire economic system by manipulating GameStop stock of all things. The game should be a silly diversion. Instead, it almost feels bizarrely prescient.