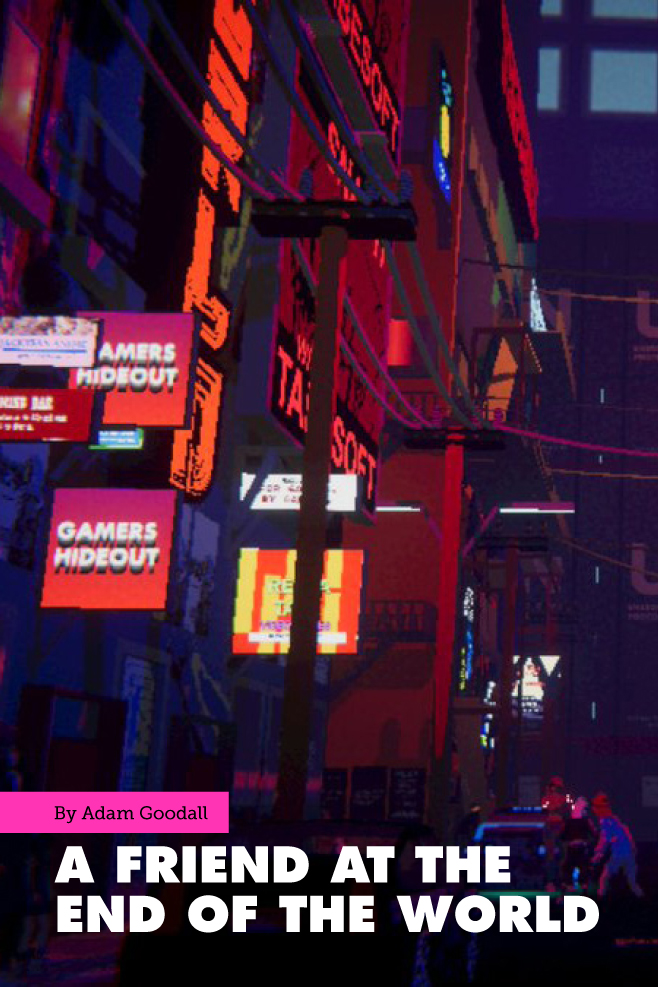 And you’re taking photos, sharp bright colors bursting against the deep blues and rust reds of the buildings and barricades. But what space do you and your camera occupy in this city? You’re far from an observer, an outside eye; rather, Faulkner positions the player as a site of tension in this world falling apart. You’re a permalance delivery person selling photos on the side. Unlike your mates, you’re tangled up in the market: you’ve got to deliver that package in ten minutes. You’ve got to sell those photos, and be okay with the dog shit pay.

But you’re also encouraged to perform little acts of resistance as you hit your KPIs. You can, if you choose, run out the clock and get to know this town better; you can take photos of your friends instead of the subjects you’re assigned; you can experiment with new and critical ways of framing the environment. That photo of the word ‘COPS’ you’ve been asked to take? Really absorb what’s around it. Take a photo that reflects what you see, not just what you’ve been asked to capture…

…we often talk of the camera as a weapon, but the revolutionary Ng?puhi filmmaker Barry Barclay spoke of it in different terms: “Over the years, the camera becomes like a friend, something you learn to take with pride into places of great power and the humblest of villages. Yet which one of us is not anxious walking with a friend into a new world?” The movies advertised all over Tauranga – they’re weapons, using the camera to destroy your community and absorb you into an order where the oppressions you bear are a fact of life. But the camera you carry in Umurangi Generation is a friend, or at least it tries to be. It’s compromised, exploited by the market, but it’s also a way for you to perform, in some small way, the game’s anti-capitalist, anti-colonial politics. It is a way for you to resist, and document, and understand what has happened to this land and its people.