According to its release notes, Lichenia is “about creating human habitats amidst climate chaos. It involves reshaping the natural and built environment, reclaiming dead cities and growing sustainable ones.” In particular, developer Paolo Pedercini (as Molleindustria, creator of titles like Democratic Socialism Simulator, which Ben Sailer wrote a great exploration of in June) wanted to address the “blank slate” trope of the city-building genre, which presents players with entirely new, untouched maps on which to begin their new civilization. These templates don’t reflect the messier history of human social development, which has typically involved building off of – and thanks to – what’s come before. And they certainly don’t reflect the realities of climate change, which will inform and complicate all of the building of the future.

Lichenia doesn’t have a real ending, so its length is undefined, but its scope is modest. Its game map is small, and it only offers the player a handful of actions. It’s playable entirely within a web browser. But its sharp focus allows it to directly challenge assumptions about economic development and environmental stewardship just by upsetting a few conventions of a popular game genre.

“Were we just building more ruins?”, the voiceover might ask if the player builds too aggressively…

In Lichenia, the player’s actions don’t always have predictable outcomes. Especially at first, the player isn’t even fully aware of what changes they’re implementing when they click something – the game doesn’t provide any labels or explanations for the actions that are available. Instead, the player has to just start trying things out. Buttons on the side seem to create new waterways, grow new vegetation, or construct roads or buildings, but they don’t always do so according to plan. Sometimes a new building unit will spread rapidly across a swath of the map and overtake green space instead of staying in one spot. An attempt at rehabilitating a region with new water sources might sputter when that water goes nowhere at all. As the world reforms in response to what choices get made, the player can start to build up a tentative understanding of the dynamics at work.

The game’s narration seems to adapt to the choices the player makes, which can help signal the effects of their actions. “Were we just building more ruins?”, the voiceover might ask if the player builds too aggressively, maybe prompting them to consider the other tools available. But it never feels totally settled. Unexpected extreme weather events can undo progress in an instant (“Earth was still troubled – no amount of care could stop its vicious feedbacks.”). Pushing development or terraforming just a bit too far in one direction or another can lead to surprising (and damaging) unintended consequences.

The ideal of the efficient, tightly managed, gleaming city of the future that blanketed the marketing materials of the SimCity series is totally unknown here.

This makes for a perspective on planning that highlights the complexity of the social and economic dynamics involved, despite the simplicity of the game itself. It upsets long-held standards of the city-building genre. The ideal of the efficient, tightly managed, gleaming city of the future that blanketed the marketing materials of the SimCity series is totally unknown here.

The game challenges the conventions of the city-building genre by removing all of the numbers and data and detail management that typically direct the player’s attention. This world can’t be quantified and then explained as a set of inputs and outputs that, in varying combinations, lead to a predictable range of outcomes. The reality illustrated here is more dynamic, and less easily expressible in an itemized list. Lichenia’s approach feels especially potent for a game about ecological change and the climate crisis.

But Lichenia’s perspective on development also offers an implicit challenge to proposals that want to address ecological crises through greener economic growth. Although the goals of these initiatives might be admirable, they still often view nature as having a distinct economic utility. Land, water, minerals – all of these are ultimately resources to be used to ensure the continued expansion of a particular economic way of life. It’s still a question of inputs and outputs, but these programs hope to better balance these things and wreak less environmental havoc in the process.

Lichenia suggests that this view of the relationship between economy and environment misunderstands it fundamentally. The two can’t be cleanly separated out from each other, and they influence and impact each other in ways that can’t be reflected on a balance sheet. There’s a more holistic approach to understanding ecology at work here. And that approach acknowledges that holding these things in better balance requires continuous work and attention. It’s easy to overlook the decay starting to spread in parts of your city you’ve left unattended for just a bit too long. Soon enough, you can find your ecosystem losing the equilibrium you’ve worked to maintain, represented onscreen by a bar that fills with either green or beige, depending on the area’s ecological health. 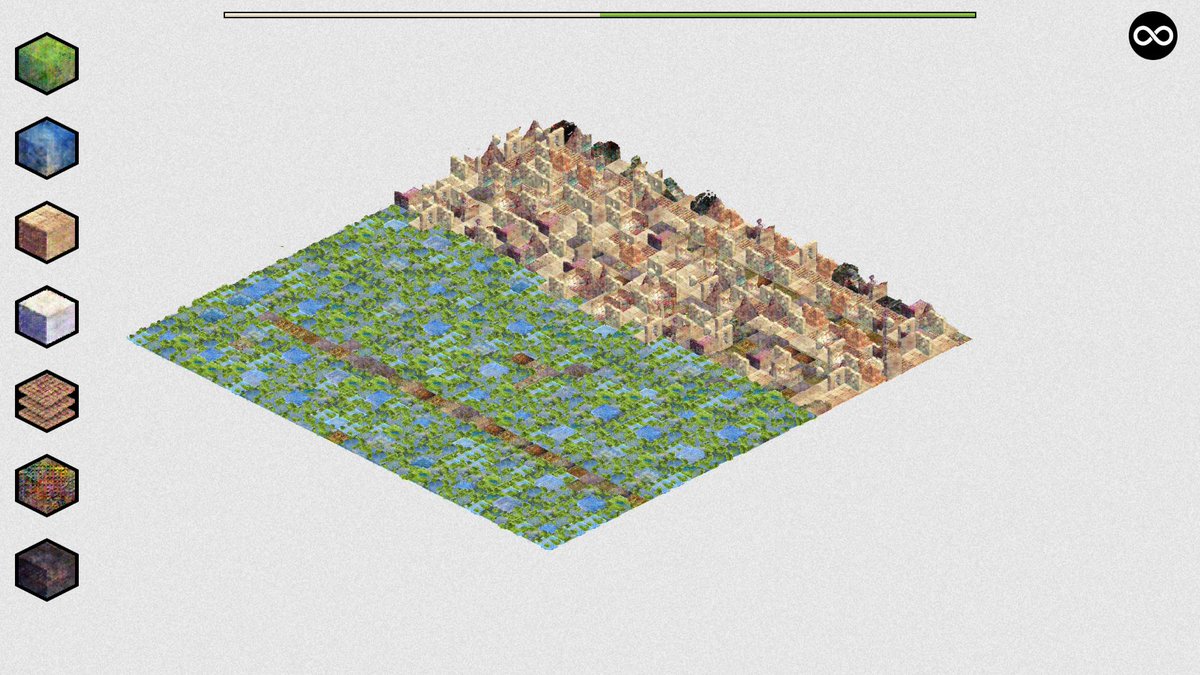 Lichenia is ultimately about the potential for rehabilitation and rebirth. Its vision of this planet’s future is not a hopeless one. But it doesn’t take anything for granted. Depending on the player’s progress, the narration might mention three possible paths forward: work to heal lands beyond this one plot, try to achieve “homeostatic equilibrium” in this one spot, or, instead, “evoke the destructive power of the elders.”

At a certain point, the game will make that destructive power available to the player. It’s never defined, but it’s easy to see it as a stand-in for nuclear warfare. When used, it immediately levels a portion of the game world and rots the soil underneath. It obliterates that area’s ability to regrow for a time. This kind of derails the game. It makes the player’s own efforts at regenerating the world much more difficult.

But it also simplifies everything. From a gameplay perspective, nuking the entire game world makes all of those unpredictable dynamics mentioned earlier much more manageable. The challenges encountered in working to rebuild soon evaporate. In a more conventional gaming analysis, this might actually be seen as a kind of win state. There’s nothing left to do afterward. A strange steady state is reached where nothing changes much anymore. The player has done everything still available to them with the mechanics provided. Nothing survives, of course. But maybe helping society avoid preventable catastrophe wasn’t everybody’s goal in the first place.

Building an Arcade in Button City

The Number of the Beast, Side B