My first foray into running the United States as a socialist president didn’t exactly transform America into a utopia. After reigning in defense spending, nationalizing healthcare, liberalizing immigration and subsidizing organic farming, citizen engagement in the economy was strong and the nation built a substantial surplus. However, my environmental efforts lacked teeth and carbon emissions remained perilously high. The Democratic Party also lost seats in Congress, with no telling whether a potential successor could maintain power, let alone build upon the progress I’d made.

Fortunately, all of this happened within 20 minutes, and trying to right my wrongs took little more than starting another round of Democratic Socialism Simulator (Windows, Mac, Linux, Android). Developed by Carnegie Mellon professor Paolo Pedercini under his development label Molleindustria, it’s a simple strategy game that puts players in the shoes of a Bernie Sanders-esque president after winning the White House. My initial experience was just one of an effectively endless number of outcomes, but rather than quickly fixing my first shortcomings, subsequent playthroughs took me deeper through an exploration of the tension between idealism and compromise.

The game isn’t intended to offer a scientifically accurate model of how social democracy would work in the United States, but it is based on research around how social democracies have functioned in the past and may function in the future, and so offers an interactive look into what a progressive presidency in America might achieve. 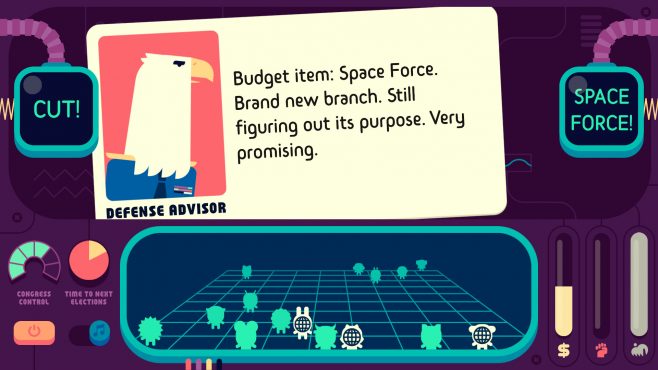 After a brief introductory tutorial, the player is presented with a randomly generated succession of policy proposals from an array of different advisers, activists, government departments and lobbyist groups, each represented by an anthropomorphized animal avatar (which are all laid out in this public spreadsheet). You then swipe left or right to pass or reject each one, affecting your approval level among members of the electorate. Decisions also impact the national debt, greenhouse gas emissions and “people power” (a measure of equality in society and the economy). Balancing popularity with principles without losing seats in the House (which makes passing progressive legislation more difficult in your second term, should you be reelected) is key to success.

Think of something like the popular medieval monarchy franchise Reigns, but built around a theme of progressive politics and current events.

Responding based on your beliefs feels easy at first, and some proposals are worded in a way that leads you towards an answer. For example, your defense secretary may request funding for the Space Force while openly acknowledging its purpose is a mystery, or an immigration adviser might recommend taking brazenly inhumane actions to shut out immigrants. Others may use threats or intimidation to sway your opinion.

But as you progress, your path forward will likely start to look less clear. Since many of the choices you’re asked to make impact other policies, it’s possible to work yourself into a position where getting things passed becomes unfeasible due to political and/or logistical limitations. In those instances, you might be presented with a policy you want to support yet will only be given two different ways to say “no” or “not right now” (one more emphatically negative than the other).

The player also has no choice in which policies are proposed or in which order, which as Gita Jackson points out for Vice, leads to a level of randomness that undermines how much influence players really have on outcomes. Results are affected by chance as much as they are by choice, and the inability to prioritize an agenda and attempt to implement it from the start takes away from the sense that you’re leading a government rather than vaguely managing one.

Making matters more complicated, the electorate’s response to decisions doesn’t always feel like it’s following a clear logic. If an issue doesn’t directly clash with their priorities, compromises can sometimes slide past them seemingly without their notice (though they’d likely object if they had more awareness).

That’s not to say the game never favors the bold outright though, and after trying to push the game’s logic by passing policies left, right, and erratically either way, it seemed to reward some level of consistency. Getting pushback on a policy? Doubling down can sometimes be better than kowtowing to lobbyist pressure, and it might even let you work toward a solution that renders the complaint toothless. You might catch some heat from the predictably pretentious New Pork Times, stridently progressive Jackalin, or the scare-mongering FOX News (which is notably non-parodied), but you might also be rewarded with broad public support. 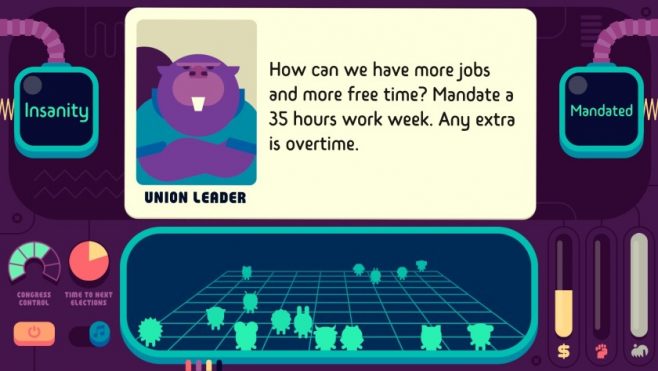 However, ending the game with a healthy balance sheet, an engaged public and strong environmental policy without hurting anyone isn’t easy to pull off consistently. After several playthroughs, I mostly failed to avoid uncomfortable compromises without consequences, resulting in difficult decisions around which trade-offs to accept to stay in power and whose rights would be inadvertently trampled.

What I found most compelling about Democratic Socialism Simulator are not just the questions it addresses about what could happen under a Sanders-style presidency, but also the ones it leaves unanswered after a round is over. How would certain compromises feel (like abandoning criminal justice reform to spare the political capital necessary to achieve Medicare for All and free public college) feel if I would be directly impacted by them in real life, whether they were intentional or not?

As a white college-educated male with a mortgage and a white-collar job, I’m playing real life with every cheat code turned on, and there’s a wide gap between problems that exist as abstract realities I read in the news versus the lived experience of oppressed people who cannot afford to wait for their rights. When nearly nothing the government does affects your material comfort, “compromise” doesn’t always land with the appropriate level of anxious urgency, and “pragmatic” often becomes a code word for “wait your turn.”

If electoral politics are essential yet transactional and insufficient for progress on their own, it is imperative to consider what is said and done as a result of my own actions and inactions, and what concrete steps must be taken to build a just and equitable future.

This is not a groundbreaking revelation, nor is it something new the game planted in my mind on its own. It is, however, a reality that the game has brought into sharper focus in my own consciousness, narrowing the gap between what I might have thought as morally correct, politically possible and immediately necessary to fight for. That examination of my own privilege is worth much more than the price of a cup of coffee, as the brutal realities of systemic oppression have landed near my own doorstep.

What Do We Owe a Viking?

Banana Chan on Jiangshi: Blood in the Banquet Hall