Not long after the inauguration of President Trump, observers noticed some similarities between the President’s inaugural speech and one given by Batman villain Bane in 2012’s The Dark Knight Rises. Both speeches offered a strange kind of populist rhetoric with frequent references to “the people” who would now, finally, have a chance to assert themselves over the elites who’d held them down for so long. Some who oppose the Trump administration saw this coincidence as an amusing but uncomfortable symbol of the awfulness of the situation we find ourselves in: the President appeared to literally be taking cues from a comic book supervillain. It was almost too on the nose to believe.

The rhetorical similarities here obscure something important about what director Christopher Nolan was trying to do with The Dark Knight Rises, though. Trump’s political platform is right wing in both ideology and practice. While Bane may sound like Trump (or vice versa), Nolan crafts his film as a cinematic argument against left wing politics. In doing so, he aligns his superhero trilogy with major trends in American political discourse over the past two decades.

In his first two Batman features, Batman Begins and The Dark Knight, Nolan presented the character as a hero who prevents Gotham’s societal collapse. In Nolan’s telling of this material, these circumstances necessitated Batman employing effectively authoritarian solutions to problems of social unrest. Consider the cell phone surveillance system Bruce Wayne constructs in The Dark Knight: he is the sole administrator of a platform that tracks every living person in Gotham with a cell phone, all in hopes of finding the location of one criminal, the Joker. Thanks to Bruce’s vast wealth, he also enjoys what is basically a monopoly on cutting edge military technology (and the violence this enables), further freeing him from any kind of public accountability. 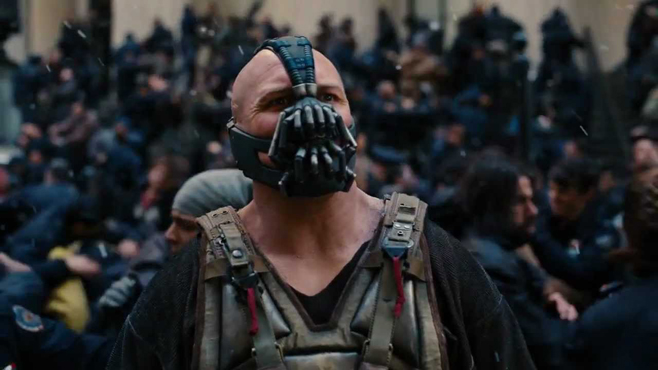 This is not new ground for the character to cover, and my claim that superheroes like Batman are inherently individualist, right wing figures is not particularly novel. What begins to distinguish Nolan’s version of the character is the nature of the challenges he encounters. In Begins and The Dark Knight, Gotham faces the threat of societal panic. Whether it’s due to chemical manipulation (as in Begins) or terrorism (The Dark Knight), the people of the city are pushed beyond their limits and civil society begins to rupture. In these films, this becomes a broad and generalized panic, lacking recognizable motivation or structure.

It’s in the trilogy’s final film, The Dark Knight Rises, that the series’ social anxieties become more politically coherent. Where prior films fixated on general ideas of unrest and chaos (with the latter acting as a central theme in The Dark Knight), Rises imagines an entirely different social project. The terror depicted in the film isn’t disordered but instead adherent to a structure. Bane recreates Gotham City into something resembling the American right’s wildest fears concerning the Occupy Wall Street movement. The once-great city finds itself in the grip of a criminal mastermind intent on destroying all of its wealth and prosperity by turning the workers against the bosses.

It’s sort of surprising how consistently Rises harps on this concept; it’s not just key to Bane’s capture of the city as a plot device, it shows up throughout the film’s dialogue and imagery in ways that border on the propagandistic. Selina Kyle’s character arc begins with her introduction as an unrepentant jewel thief who warns Bruce that a “storm’s coming” because the wealthy have kept the working classes down too long, but the audience, like Bruce, is meant to hear this as a threat, not as a diagnosis of an injustice. Later, after Bane’s incitement of the violent mobs that rampage through town, Selina finds a family photograph in an abandoned apartment and recognizes her own growing remorse. “This was someone’s home,” she says. Her friend reassures her, saying that it’s now “everyone’s home.” Nolan frames the two with the wreckage of lives, a house in ruins, and the intended implications are clear. (You can almost hear him whispering “socialism only works on paper” as Selina considers her friend’s remark in solemn silence.) 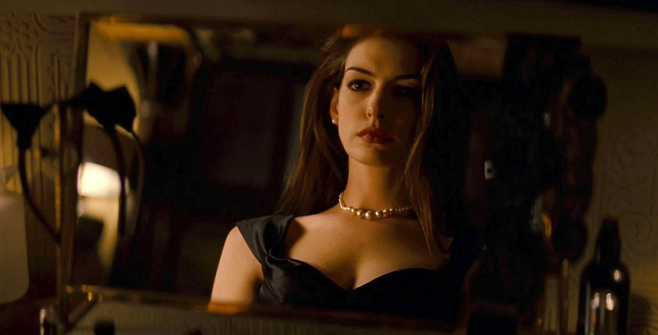 Bane refers to Blackgate Prison as a “symbol of oppression” before releasing a thousand of the city’s most violent felons onto an unsuspecting populace. Again, Nolan tips his hand here. By placing something resembling criminal justice reform rhetoric next to images of gun-toting criminals attacking prison guards and rushing the streets, Nolan wants to encourage an association between critiques of the prison industrial complex and violent lawlessness.

With these kinds of moments, Nolan elaborates on the more ambiguous social commentary offered in his previous Dark Knight movies. Here, he envisions resistance to leftist populism (or at least his misrepresentative depiction of it) as a moral imperative. The social structures we currently inhabit, despite their profound inequalities, are to be protected at all costs because the alternative inevitably leads to the nightmare seen in Gotham’s Winter of Bane. It’s because the risks are so great that the response from those who know best must be so severe.

The film’s last act hinges on the return of Batman, who has the moral clarity and the willingness to act that some 12 million other residents of Gotham apparently lack. As important as either of those traits is his access to financial resources (and therefore military technology) that the people do not have. Once he returns, he solves in hours what the rest of the city, collectively, couldn’t fix in months. The film provides a justification for an authoritarian answer to those who question the American social order. It urges us to trust and empower those at the top so that we might be saved from catastrophe. Without Batman’s nerve and wealth, Gotham City would have been decimated.

The fear of left politics evidenced in the developments from Batman Begins to The Dark Knight Rises parallels – or, more likely, reflects – a similar development in American political discourse. While the U.S. invasion of Iraq resulted in massive worldwide protests against American militarism, it was not until the financial collapse of 2007-2008 and the Great Recession that those on the right began to air their gravest (or most frantic) concerns that the fabric of society was fraying. The financial crisis destroyed the livelihoods of millions throughout the country, many of whom felt that politics-as-usual was not a sufficient response. Their justified anger helped to shift the country’s political attitude toward something that felt more combustible, leading to Barack Obama’s infamous remark to the CEOs of several banking firms that his administration was “the only thing between you and the pitchforks.”

The post-Recession political climate soon became one shaped by media figures like Glenn Beck and groups like the Tea Party, who often spoke of this period in apocalyptic tones, warning about the dangers of socialism while claiming that a struggle for the American way of life was taking place. By the time Occupy Wall Street was making headlines (and thanks in part to that movement’s agitation), structural critiques of capitalism and the role of the state itself had started to creep into mainstream discourse to a degree not seen in decades. The idea that the American economy, and the government’s role in it, had to be drastically reorganized to more fairly redistribute wealth emerged into the daily news cycle.

This was the atmosphere surrounding the release of Rises and the one it seeks to replicate by depicting the hostile takeover of Gotham by a villain spouting populist slogans. Though the writing of the film’s script predates the Occupy Wall Street movement, the cultural trends that made Occupy possible were visible well before its appearance. Nolan’s admission of the influence of the French Revolution on Rises also indicates a desire to address the criticisms made by those sympathetic to Occupy’s arguments. In Rises, however, there is no structural analysis of society’s problems except through Bane. The film equates the two whenever possible. In this depiction, to critique society’s injustices at a fundamental level is to be a few short steps away from handing the nuclear codes over to a terrorist.

In an interview from around the release of the third film, Nolan argues against the idea that his films have a political intent but then inadvertently contradicts this, saying that his interest is in showing “the worst thing” a villain can do, something that would “turn our world upside down.” In Nolan’s estimation, an upside-down world where the worst has happened is one in which people rebel against exploitation by the rich, against the abuses of the police and the prison system, against a very specific kind of social order that oppresses many while valorizing an elite few. Whether or not Nolan intended for his films to be read this way, they reflect a growing comfort with authoritarianism in mainstream American politics. This comfort was cultivated by politicians and media outlets who stoked fears over topics like immigration, nuclear proliferation and economic catastrophe to warn of an impending societal collapse that had to be defended against through reactionary measures. Nolan’s trilogy ultimately offers a comforting symbolic justification for this national trajectory, a reassurance that the decisions this country has made were necessary and just. Like all stories about Batman, this is, of course, a fiction.