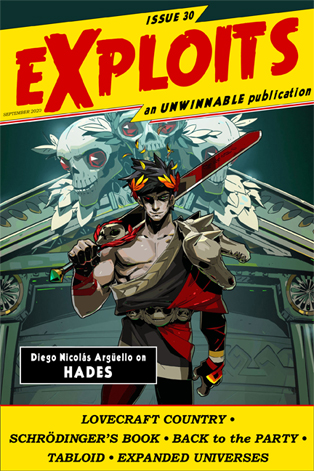 This is a reprint of the cover story from Issue #30 of Exploits, our collaborative cultural diary in magazine form. If you like what you see, buy it now for $2, or subscribe to never miss an issue (note: Exploits is always free for subscribers of Unwinnable Monthly).

Videogames love families as plot devices. Look back on the dozen of AAA titles in the last decade, and you’ll find dying relatives whose existence lingers just long enough to give lead characters a sense of purpose, while justifying their drive for violence.

Supergiant Games’ Hades is, in some way, tied to this premise. But it isn’t shy about plunging players right into the heart of a dysfunctional family, forcing them to pick favorites and making them pay in blood for any perceived slights. That’s Zagreus in Hades, who’s exhausted with the antics of his father Hades, a workaholic who fills page after page with records of the recently departed as the lord of Greek underworld. Zagreus decides to give Hades the middle finger and escape from hell, while his celestial aunts and cousins offer their aid, offering fragments of their power as gifts: foes become hungover thanks to Dionysus, blinded by love after the touch of Aphrodite and pushed away by Poseidon’s sea waves.

But why should anyone trust them, when these gods are mischievous by nature? They mingle with and treat mortals as toys, plotting their trickery all the way from Olympus. Zagreus quickly learns the danger in crossing them. Their rivalry, fueled by envy and stubbornness, often puts his getaway in jeopardy.

Lighting shatters the halls of Elysium if you deny Zeus’ offering, but minutes after, you have Poseidon convincing you to accept his favor instead, claiming that he’s more powerful than Zeus. Judgement is disguised as gossip when Zagreus crosses paths with his relatives, as they feign surprise at his decisions and clamor to demonstrate their value by trash talking behind their siblings’ backs.

“We don’t all share the same demeanor,” said Athena during a reunion. “(…) though, all of us, I think, wish you the best.” Even though the gods have the power to grant him infinite strength, they choose to wield Zagreus as yet another pawn: one they can toy with, while ostensibly offering help that actually only furthers their own ends. Without other means of reprieve, Hades portrays the helplessness of having to place your trust in your relatives, even as we realize they’re just as flawed as the people and environments we seek escape from. It’s a sobering representation of the harm family can wreak even within the smallest of exchanges.