“There is something about riding down the street on a prancing horse that makes you feel like something, even when you ain’t a thing.” – Will Rogers

From the time some adult or another told me to hold my hand flat as a pancake when feeding a horse since my fingers “look just like baby carrots,” I’ve been terrified of horses. The thought of their giant chompers splintering my child’s fingers like any other backyard root veggie was scary enough, but the things are the size of monsters. They’re big and especially scary to a small person and they smell like a barn, all musky hay-sweetness mixed with manure, but their eyes are the actual worst. They’re either so dark as to look inky black like an alien’s or they’re light enough to see the horizontal pupil, an uncommon enough occurrence in my experience that it forces me to swim through a heady cognitive dissonance every time I encounter it. They’re also literally awesome – their corded muscles rippling their hides in hypnotic waves as they move no matter how old or “past their prime” they may be.

My aversion extended all the way to their digital counterparts. I was able to handle Ocarina of Time’s Epona because she was gentle and answered to a song, but Ganondorf’s steed was still the stuff of both Link’s and my nightmares despite the low polygon count. His mane was a collection of fiery blades. Even while playing an all-text RPG like Gemstone IV, I avoided the horses. On one occasion I managed to wander into a hunting ground beyond my ken (I still have a habit of it) and was promptly put down by a ghostly pooka – a creature I assume is based on the shape-shifting sprites of Celtic folklore but always appears in Gemstone as a tortured spectral horse weighed down by heavy chains like an Animal Farm version of Jacob Marley. As with Ebenezer Scrooge, the experience put me into a swoon. 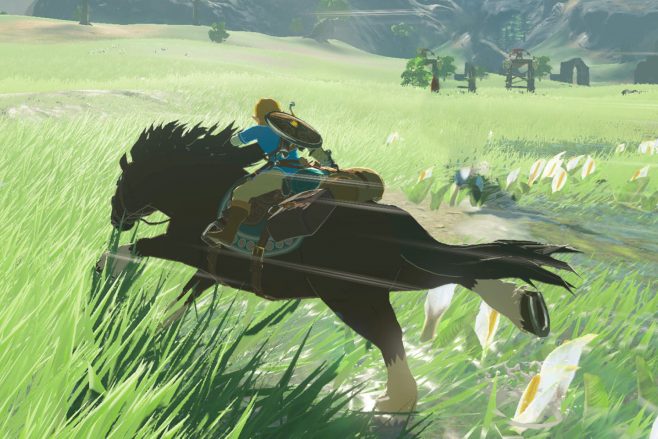 Horses seem like they really could come back as ghosts. They’re positively otherworldly with those alien eyes and the distinct sense they’ve been here far longer and know the place far better than we have or can ever. A college professor who kept horses once told me a story of a mare that entangled herself in some rope, managing to get a coil wrapped so tight around her neck that she was strangling. The only way out my professor could see was to cut the rope with a knife, and fortunately he had one on him. But when the horse caught sight of the blade she went wild and threatened to crush him in her struggles or be stabbed. This is when he looked her straight in the eye and hopelessly told her exactly what he meant to do, trying to project his trustworthiness with all of his will. He swears to me he felt something pass between them in that moment, and she managed to still herself long enough to be cut free. He says she loved him forever after that, running to him every time he appeared in barn or field and I believe him. He’s a bit of hippie and so is much more attuned to the mystic than me, but I saw him again recently – fourteen years outside of graduation – and he hasn’t aged a day. Maybe he’s on to something.

I hated the “Wild Horses, Tamed Passions” mission in Red Dead Redemption. I was never good at doing anything other than riding horses in games (and even then – yikes) and this involved herding and lassoing a golden stallion that was programmed to make it at least a little difficult for the player. Turns out it was a lot difficult for one with moderate equinophobia. I wished I could borrow some of my old professor’s horse whispering and convert it into code, but finally I managed to capture and break the Kentucky Saddler from Cholla Springs. It’s hard to play cowboy without a horse, so eventually I did get the hang of racing and shooting while riding. I was even good at it, if I do say so myself.

That Kentucky Saddler became the quintessential trusty steed for the majority of my game and after countless rides to admire electronic sunsets and the digital yips of coyotes, I considered him as much a companion as I thought of John Marston as “me.” When he was arbitrarily killed by a wild boar that got the drop on us I took down the villainous pig with only my hunting knife, seeing red and knowing how silly it was to be so angry but savoring my revenge all the same. A gun was too quick for that swine. I never rode another Kentucky Saddler. I preferred to think of the ones I’d see running in wild bands as his spirit set free.

The real things still spook me, but after avenging my golden boy I learned to appreciate my time with videogame steeds. After my two guinea pigs died in real life, I spent hours hunting down mounts with similar markings in Breath of the Wild. I fed them all the apples I had and registered them at a stable so I could have the option of customizing their manes and tails. I had flowers woven through their hair and named them after their real-life counterparts so my two noisy girls would have two digital monuments stored forever on my save file. It’s a comfort to see them gussied up and content every time I talk with a stable master. Not everyone realizes this since they’re often kept in cages that are far too small, but guinea pigs love to run. Mine especially liked to chase each other, squabbling over baby carrots. When I take their virtual avatars on galloping rides and Hyrule’s deer and foxes break into a sprint before us, I can sense a bit of my girls’ spirits. It’s artificial, yes, but it’s also almost mystical.

Marx at the Arcade Interview

Almost the Only Cats I Have Ever Had