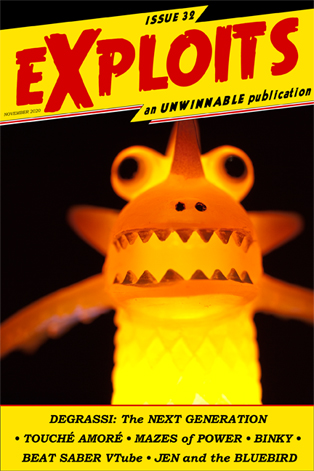 This is a reprint of the main essay from Issue #32 of Exploits, our collaborative cultural diary in magazine form. If you like what you see, buy it now for $2, or subscribe to never miss an issue (note: Exploits is always free for subscribers of Unwinnable Monthly).

So my favorite weird corner of YouTube is Beat Saber VTube.

Typically, VTubers are the performers behind rigged, motion-captured, automatically animated characters (who are often, but not always, anime girls). Beat Saber VTube, by contrast, is all about Beat Saber (the cyber noir VR rhythm game from Czech developer Beat Games). Beat Saber VTubers are typically mute, and seen from behind – the classic third person/over-the-shoulder view. We aren’t watching them, per se: we’re watching the way they play the game.

My favorite Beat Saber VTube video (because I’m the kind of person who has a favorite Beat Saber VTube video) is makeUmove’s playthrough of “Flamingo” by Kero Kero Bonito. I’ve watched it over a hundred times since it went up last October – which is weird, because it’s hardly the best thing makeUmove’s ever done. She’s greatly upgraded her fabric simulations and body tracking since last year, and she’s honed her saber technique. Her recent videos are more polished; they show her effortlessly tearing through blocks with (usually) catlike precision. But, still, her old run of “Flamingo” has a glitchy, framey charm to it, which is something I’ve never stopped loving.

I think it’s the fact that the style behind the avatar is still recognizably makeUmove. Even under the framiness and the twitchy body tracking, you can still resolve the effortless precision and follow-through to each slash. The style shows underneath: it’s like clocking a familiar actor under heavy makeup. You couldn’t mistake makeUmove for omotea, for example, even in their special Halloween outfits – the former is all about technique and the latter is all about style.

And it’s this display of personality that makes me love Beat Saber VTube – it’s character building and storytelling, by the rigged motion of an artificial body. By this, there’s a certain queerness and genderfuckedness to these characters: they’re a weightless femme artifice, one that could be donned by anyone. “Fans: Are you a man or a woman?” (reads one comment on a video by omotea). “‘I’m a dancer.’ What gender are you? ‘Funky’ Yeah but what’s in your pants? ‘Rhythm.’”

But even beyond this (and beyond the bright colors, and catchy music, and pretty anime girls), the scene has an oddly comforting appeal to me. It’s a kind of jagged-edged DIY realness – with barely enough body tracking, and just enough hair and fabric simulation, the artifice is always acknowledged, never smoothed over. makeUmove’s take on “Flamingo,” then, might be a more full embrace of this medium’s janky, bewitching artificiality. It’s a representation of an archetypal feminine body, with little of the grace of that body’s tradition.

Rather, it’s a glitchy, imperfect imagination of femininity, embodied with a loose, jittery plasticity; a tactile experience that deeply recalls my own. It’s a depiction I wish I saw echoed more often across media: the female bodies not as curated, flawless objects, but as the graceless, mutable things they are.