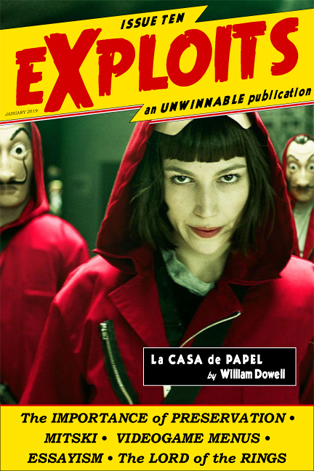 This is a reprint of the featured essay from Exploits #10, our magazine dedicated to the culture we love. If you like what you see, grab the magazine for $2  or subscribe to never miss an issue (note: Exploits is free for subscribers of Unwinnable Monthly).

The oldest surviving motion picture ever produced was a five-second film called “Fred Ott’s Sneeze,” released back in 1894. The eponymous Ott, who was one of Thomas Edison’s assistants, sniffed a pinch of tobacco and sneezed. History was made; that iconic moment was promptly captured on camera. Yet, only 45 out of the film’s 81 frames were animated on 16mm film in 1953 – and it was only in 2013 that the entire motion picture was finally put together the way it was meant to be seen, with Ott actually exhaling a second sneeze. Then a second film featuring the world’s first actor – “Fred Ott Holding a Bird” – was also made, with a third one, “The Kiss,” later produced in 1900.

These may not be considered groundbreaking by today’s standards, but as the world’s first motion pictures, they are undoubtedly a significant piece of cinematic legacy. Yet many films that came much later have already been lost to time and decay. According to the Library of Congress, only 20 percent of American films from the 1910s and 1920s exist in complete form, while merely half of movies made before 1950 are still around. But thanks to good ol’ capitalism, commercial producers are seeing the economic value of preserving their film libraries. With audiences clamoring for high picture quality for older films, companies have been pumping resources into making sure these don’t deteriorate. Better late than never, right? Even music preservation is now a core mission for the Grammy Foundation.

Videogames, however, haven’t been shown the same sort of reverence. While corporations in these industries are tapping on the value of their historical works, the preservation of videogames’ short, albeit eventful history is fraught with challenges, its very value undermined by the industry’s biggest companies. Nintendo has been waging wars against ROM sites for uploading digital copies of their retro titles, even for obsolete games that can no longer be bought legally. In particular, the owners of LoveROMs were fined for a hefty $12 million – a clear deterrent aimed at any would-be hackers. Digital copies of P.T., the short horror demo by Hideo Kojima, were expunged from Playstation stores when Konami famously broke off all ties with the Japanese developer. And for a tense period, many have wondered about the availability of the titles from Telltale Games after the studio’s closure.

As cultural artifacts, videogames are important because they represent the necessity of our history and ideas – and all the weird and wonderful peculiarities of their experiences. The cult favorite Earthbound would never had attained its status today, for instance, if not for volunteers and fans who worked on producing ROMs of the game for a bigger audience. Yet more games are already on the verge of being lost forever. Like film and music preservation before it, videogame preservation is a complicated affair; data degradation is a legitimate concern, with archivists from groups like the Video Game History Foundation and The Game Preservation Society battling time itself to salvage what’s left after the deterioration of the hardware and cartridges, and the data rot of the software.

Of course, from a legal perspective, companies like Nintendo have every right to protect their intellectual properties. But with studios becoming increasingly territorial over their titles, some of our favorite videogames – like the original version of Final Fantasy 7 — may very well already be slipping towards extinction.