I’ve pretty much always been an animal guy, and this has only gotten “worse” with age (i.e. our fur-babies Astrid and Finley). But my appreciation for non-human companionship isn’t limited to the real-world because videogames have gotten really damn good at making me care about my (usually) quadrupedal buddies. Emphasis on the “companion” part. I’m not talking about stuff like Pokemon or Monster Rancher where the animals are more like livestock or pets.

World of Warcraft is probably the game that got me to appreciate my non-human allies. I’d begun to mess around with the various classes to see what I liked best, and the background support of the hunter seemed like a good fit for me. Plus you could tame animals! And did I ever.

My hunter, Diana (named after my wife and also, I mean, duh, it’s perfect), quickly became my main and I began to tame several different critters because I had an idea for a theme and I was gonna roll with it, dammit! It didn’t take long before I’d amassed a small task force of creatures that you’d probably expect to see with an elven hunter, and named them after various Greek and Roman deities I thought sort of loosely fit the bill – like a bear named Atlas, or my main buddy, an owl named Icarus. That these animals leveled up along with me and could learn new skills to better assist was icing on the cake. I just liked being able to wander through the world with my trusty allies at my side, never feeling like I was alone despite my tendencies to play solo.

Fallout’s (take your pick) Dogmeat is another adorable friend that I enjoyed taking along on my adventures. He was loyal, didn’t hesitate to jump into a fight and I could have him scavenge for stuff which was super handy. His lack of durability led to me having him stay at home whenever I knew I was headed into a particularly dangerous area, but if aimless wandering was the goal he was always at my side. 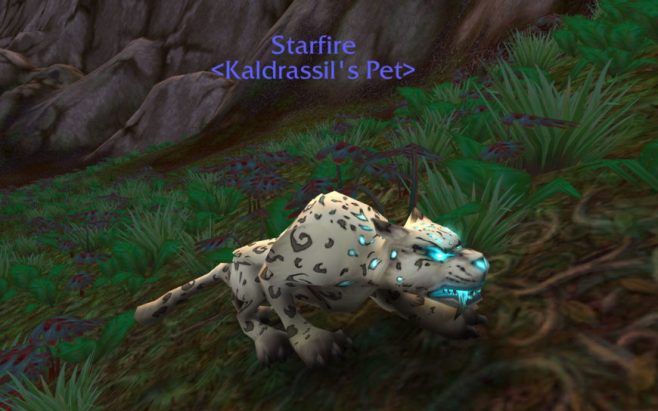 Most recently it’s been Assassin’s Creed Odyssey that got me thinking about my animal frens again. First there’s, of course, Ikaros, who sometimes makes an appearance when I take too long browsing in a shop, but is also instrumental in helping me scout out hostile territory. Then after a bit of playing and leveling-up, I was surprised to find an ability in the skill tree that would let me tame certain animals. So, of course, I jumped on it. So between knowing that Ikaros always has my back and my new lioness pal will murder anyone who tries to attack me, I’ve been feeling pretty well taken care of. We’re like a very tight-knit (and very sharp) family.

I do think the way in which we’re able to interact with our virtual animal friends could do with some improvements, of course. Dogmeat is way too easy to get killed, which is heartbreaking the first time and frustrating the tenth; as of the last time I played World of Warcraft (which was more years ago than I’d like to think about) the only thing you could do with a hunter’s animals is have them fight, learn skills or summon/dismiss them; tamed animals in AC: Odyssey are (mechanically) treated like temporary meat shields. Hell, even D-Dog from Metal Gear Solid V could’ve done with a bit more fluff, no pun intended. You find him as a puppy, he’s adorable, you have like one cutscene with him, then after some time passes he’s grown up and can come with you on missions and that’s it. Imagine if we could actually interact with him more as he goes from a lil’ pupper to a big pupper, though. He’d feel like much more than a useful gameplay mechanic wrapped in a cuddly four-legged shell.

Regardless of any missed opportunities, I’ll always have a fondness for our digital animal friends. Even if the games they’re in present them as nothing more than what is ostensibly an additional character ability, to me they’re more than that. They’re right in the thick of the adventure with me, sharing in the dangers and in the victories. And they don’t piss and moan about it the entire time either, Lydia.

The One Good Dog

Masquerada and the Heart of the Queer Family