By the early 2000s, the Final Fantasy series had reached a level of success unrivaled by any of its genre peers up to that point, thanks in particular to breakout hit Final Fantasy VII and its successors. Which is why the decisions made by creator Squaresoft (now Square Enix) after the release of the tenth title in the series remain so interesting and contentious. Rather than continue on the path it had taken over the previous 14 years, Square took a detour after FFX: it released a massively multiplayer online game (FFXI) and then produced the first direct sequel in the series (X-2).

When the company finally returned to the precedent established earlier – single-player games unconnected narratively despite sharing a franchise title – it was after the longest gap between main entries in the series, and with a new director at the helm. Yasumi Matsuno, who’d previously directed Final Fantasy Tactics, took over after the departure of Hironobu Sakaguchi. Though Matsuno would leave production before the game was completed, the final product still feels thoroughly indebted to his distinct creative voice.

At release in 2006, Final Fantasy XII didn’t sit well with all audiences. Some loved it, but others were frustrated at its design and narrative decisions. Its battle system abandoned a majority of the mechanics established in the series up to that point, instead resembling something like a mix of Knights of the Old Republic with strategy game elements. There are no random battles. There’s no world map in the conventional sense (“Tiny Characters in a Huge World,” as Suikoden’s soundtrack called it), a choice FFX had already made but was still controversial at the time. And, perhaps most bewildering to longtime series fans, FFXII’s storyline decentered its heroes and dealt far more with political development than character development. Despite the fact that the game introduces its main six-person cast early and keeps them consistent over the next few dozen hours, their personal journeys aren’t the real focus of the narrative. (The strength of the characterization in the series’ best entries is something Levi Rubeck recently covered in his great column on FFVI.) 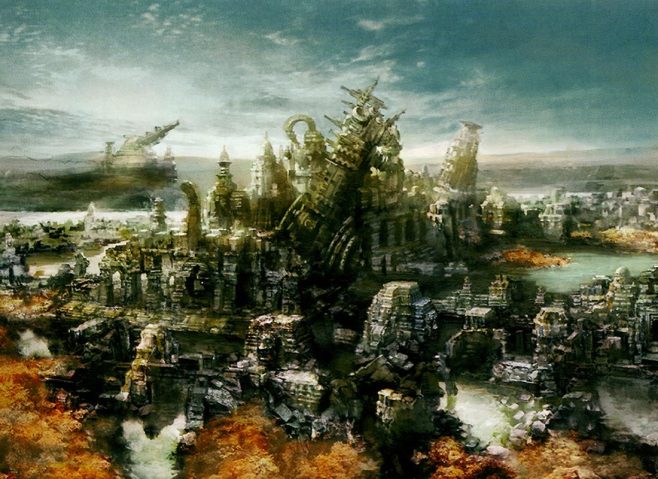 There are relatively few memorable moments between characters in FFXII compared to its predecessors. Instead, the game opts for an approach in which the world itself, Ivalice (also featured in the Final Fantasy Tactics games), becomes its own kind of main character. Cultural and political histories take center stage whenever possible, and the main cast becomes a vehicle for learning and relating these histories. Rather than driving major dramatic events forward, the cast of FFXII often finds itself at the crossroads of centuries-long tensions and conflicts, inhabiting a peripheral role until things erupt and demand a response.

This can make for a slightly awkward narrative structure, however, as maintaining interest in a story for 40 or so hours requires some amount of forward momentum for its protagonists. As a result, a significant amount of the game’s content – maybe even a majority – is not contained within the main storyline. FFXII instead offers players freedom early on to explore its world at their preferred pace. It encourages this principally through its hunt system, which tasks the player with finding and defeating unique monsters. These hunts often incorporate significant backstories, additional side quests and new parts of the world. There’s also an encyclopedia of lore that gradually expands as the player defeats common enemies and bosses. Killing 10 of a certain enemy type might unlock a description of a particular historical event, or a folktale, or research notes from a scholar, or something else; in many cases, these pieces of lore hint at further quests and locations. It’s an approach to worldbuilding that’s distinct from other games in the series, and it means that FFXII doesn’t quite make sense unless the freedom it offers is embraced. It also means that much of the game’s most striking material, thematically and mechanically, is entirely optional.

The Battle of Nabudis, which takes place a few years before the events of FFXII, hangs over much of the game’s narrative, for example. The Archadian Empire invaded the city of Nabudis and used it as a testing ground for a new weapon it had recently developed, a weapon which was so effective it obliterated the population in moments and left a toxic wasteland in its wake. The event becomes a formative moment in the story both politically and personally, and the cast of FFXII makes frequent reference to the Battle when discussing their own motivations and their strategies going forward.

The game never requires that the player actually visit the region decimated by the Battle. They can experience the entire main narrative without realizing that these locations are even in the game at all. But they’re in there. Through side quests or aimless exploration, the player can find themselves in the Nabreus Deadlands and the Necrohol of Nabudis, enormous areas with unique characters and storylines that speak, through muted colors and lingering phantoms, to the enduring horrors of war.

These areas don’t offer a complete, fully detailed portrait of the lost kingdom, which is in accordance with the way the game renders history throughout. For as many artifacts and folktales and recipes from centuries ago that the player can read about in fine detail, the game makes clear that there are multitudes more that are irretrievable. The sheer force of time has pushed many things once held as common knowledge beyond the grasp of the world’s current inhabitants, leaving only educated guesses to fill in the gaps. Some remaining details can still be scrutinized and studied, while many more, like the meanings of so many ruins scattered across the map, are lost forever. In either case, though, this history continually shapes the present.

Taken together, all of this leaves an impression on the player that’s unique within the series. Despite the fact that the player controls the heroes of this particular story, FFXII gives the audience the sense that these aren’t the most important people in the world of the game. Ivalice isn’t waiting on the player’s actions to keep moving forward, and these characters are not at the center of everyone’s attention or ambition. The cast of FFXII is just one group that has, along with innumerable others across generations, contributed to the creation of a rich history that is at once shared and painful, complicated and celebrated.

This approach to storytelling is fortified by a really stellar translation – both the script and vocal performances remain among the strongest in the medium. In a similar way, nearly 15 years later, there are still very few games that provide the kind of experience FFXII does. Some of its mechanics have influenced the design of later games, but its tone remains distinct. Anyone looking for a conventional Final Fantasy experience will likely want to look elsewhere. The disappointment in response to the game’s release from some series enthusiasts is understandable in this context. But this also means that, for fans of the game, there still isn’t anything quite like it.

Neither Here Nor There

Banana Chan on Jiangshi: Blood in the Banquet Hall