This feature is a reprint from Unwinnable Monthly #128. If you like what you see, grab the magazine for less than ten dollars, or subscribe and get all future magazines for half price. 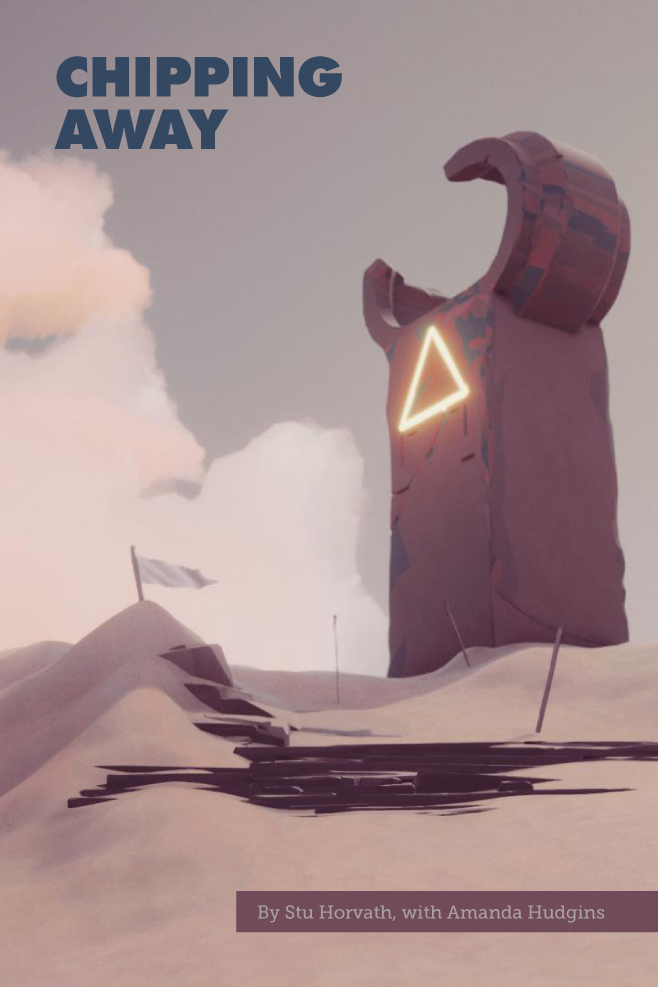 Turn to the left, hit the thruster. Strafe a bit right, avoid that outcropping. No, more right. Tap the thruster. No, no, too much. Accidentally turn more to the left. Wait, no. Thrust? No, strafe? No! The wall is too close! BOOM.

When I first saw Dropship, from indie studio Mini Goliath, I was immediately attracted to its glitched out aesthetic. Everything is fuzzed out, text dances, collapse seems imminent. The glitch aesthetic does for digital what offset errors do for print and ruins do for architecture: reveal a fragility in things we often casually ascribe with characteristics of perfection and permanence. Decay appeals to me on a fundamental level and I generally think an occasional dose of entropy is good for maintaining a realistic perspective in your life. Entropy, of course, is generally accepted to be a gradual decline into disorder. In Dropship, the decline is precipitous, often only requiring a split second mistake to send you tumbling into oblivion. 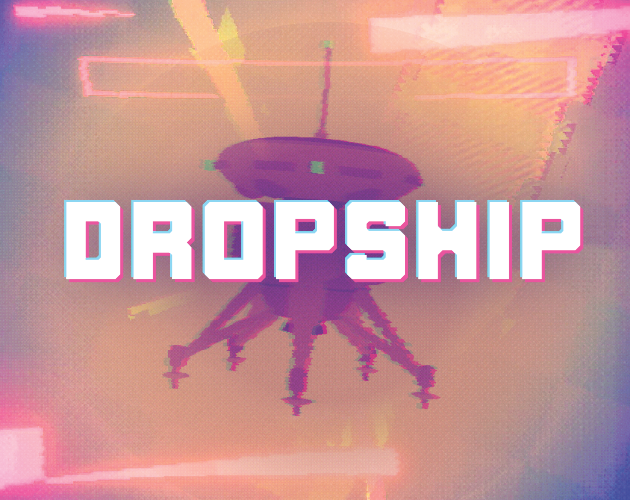 The game is a clear homage to the old Atari game Lunar Lander. You’re in control of a small space module equipped with the ability to turn, strafe and fire a thruster as you navigate narrow passages to collect stranded astronauts and safely return to a landing pad. Unfortunately, you hull seems to be made of tinfoil, the rock walls of diamonds and gravity is relative to the dropship’s position, which spins the camera and makes an already challenging task of maneuvering that much worse. When you inevitably knock into something, the dropship ignites into a glitchy explosion and the game insults your performance. There is probably more to the game, but I can’t get past the third level. Yet.

“We have deliberately kept the difficulty curve steep,” says Paul Larger, “Games like VVVVVV and Super Meat Boy had us absolutely raging and we wanted to make a game like that. ” Yup. Mission accomplished, Paul.

“Hopefully players will be able to eventually master it and get through the levels,” he continues. “People who like a challenge should enjoy it, and we included our times for each level in there as well so you can see if you can best us on a speed run. If it causes people to rage quit though we are cool with that as well.”

Mini Goliath is just two people, Paul Large and Gary Whitton, Scottish developers with day jobs at Ruffian Games. While they work together at a larger studio, Mini Goliath is the place they can pour themselves into their indie impulses. “We have always been prototyping and making little games on the side that never saw the light of day,” says Paul. “Mini Goliath is a chance for us to put ourselves out there. We got a chance to make some small games at the studio and it just felt more right to us than the usual AAA work we do.” 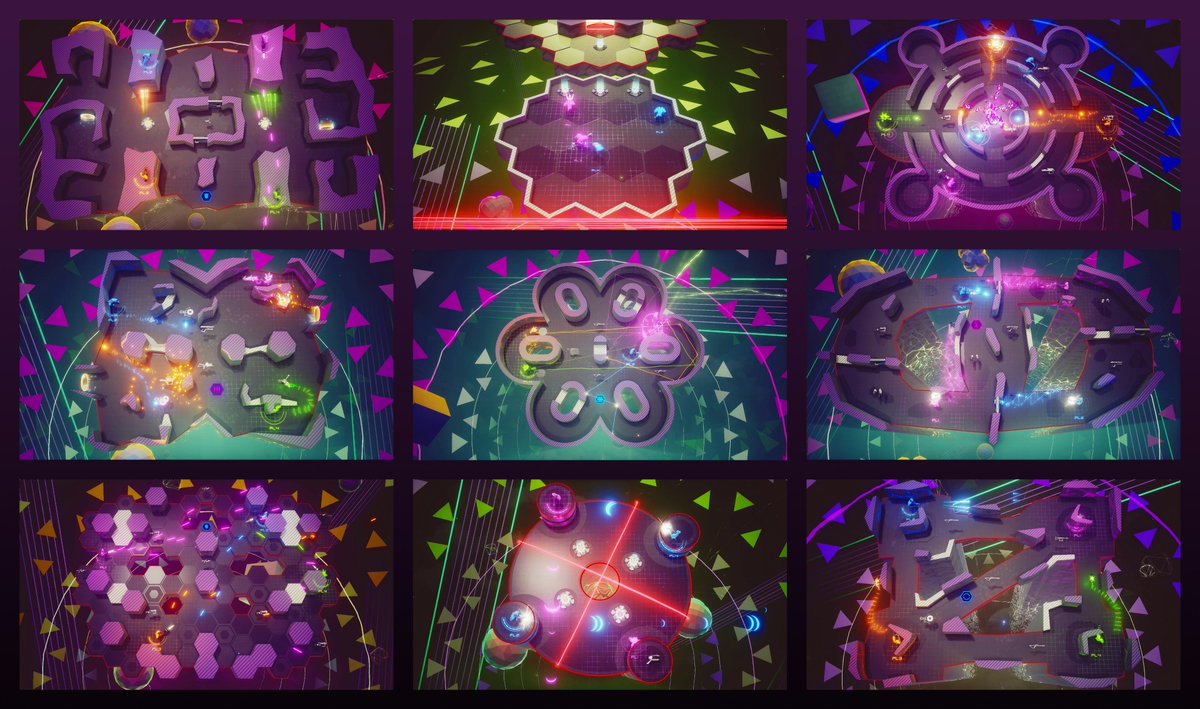 Surprisingly, though, the pair got their first taste of indie-style development at their day job, with  Fragmental, a competitive couch multiplayer game – “like a cross between Hotline Miami and Towerfall Ascension.” The game was developed by a small team, which required folks to work on aspects of the game they wouldn’t normally have a hand in. “The whole thing was prototyped from our initial ideas meetings within a week or two and we decided on the vibrant neon art style from playing and testing the prototype,” says Paul. “That is a process [Mini Goliath likes] to stick to quite a bit; prototype it quick and see if it works – if not, move on.”

The next Ruffian Games project, RadTV – pitched as WarioWare in VR – was developed with a similar ethos, though it drifted from its initial concept. After that, Ruffian focused more on contract work. “That stopped us from making any more little games with the studio,” says Paul, “So [we] started Mini Goliath so we could make Revoider on the side and keep learning different things outside of the day job. I’m a 3D artist and Gary is an animator, but from our experiences on Fragmental and RadTV, we were confident we could make full games by ourselves.”

Revoider looks to be a gorgeous dreamscape of a game about a boy wandering a surreal landscape dotted with strange ruins and reality-bending doorways. In some ways, it makes me think of several obscure European cartoons from the 80s that probably only exist in my own mind. It also reminds of the space-bending indie storybook game Gorogoa, though more in general vibe than execution – after all, Revoider features a fully detailed 3D world to explore. 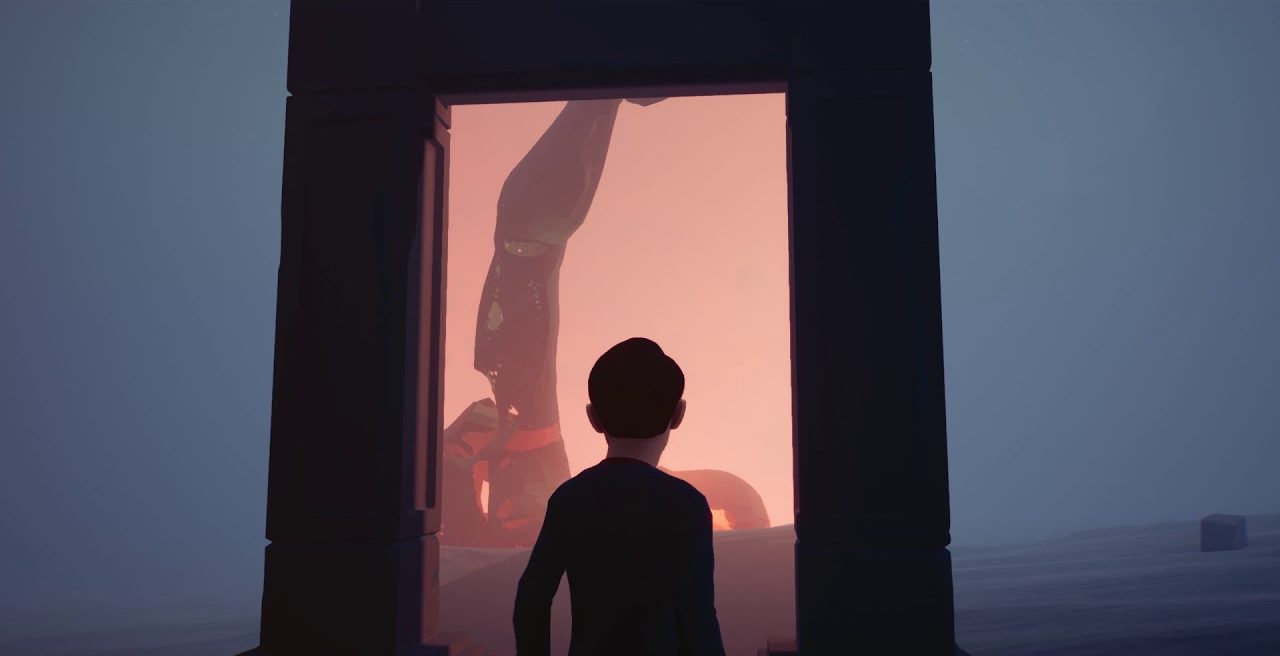 Revoider is Mini Goliath’s end goal, a game in a larger scale that challenges their abilities. “Revoider really just started with the two of us wanting to make something pretty and push ourselves artistically,” says Paul. “From there it’s all been organic. At the heart of it, it’s about exploration. We want to encourage playfulness and evoke a sense of childlike wonder and curiosity in the player. It’s quite serene right now but we’d definitely like to explore some darker elements in future.  ”

Judging from the development demos they’ve released so far, they’ve definitely succeeded at nailing pretty. There are huge desert vistas punctuated by mysterious monoliths. Clouds take on the shapes of bears and dinosaurs. Kaleidoscopes dance. For me, its the portals that really get my synapses firing – through the arch of a doorway you can see locations that are different from your current surroundings; walk through and you’re in an entirely new place. It is one of those things that you can only really do with videogames, when aesthetic and mechanic combine to give you that “Eureka!” moment of understanding (Gorogoa does this, as does the forthcoming Maquette).

Despite all this allure, it is the boy himself who dominates Revoider, specifically the entrancing way he moves. “The animation style is inspired by Spider-Man: Into the Spider-Verse,” says Paul. “The stepped animation with a smooth camera had such a unique look that we were curious to see if we could replicate a little bit of that in Unreal. It’s definitely the thing that people have been most curious about. Our solution is all done at runtime, works with physics and can be adjusted dynamically. 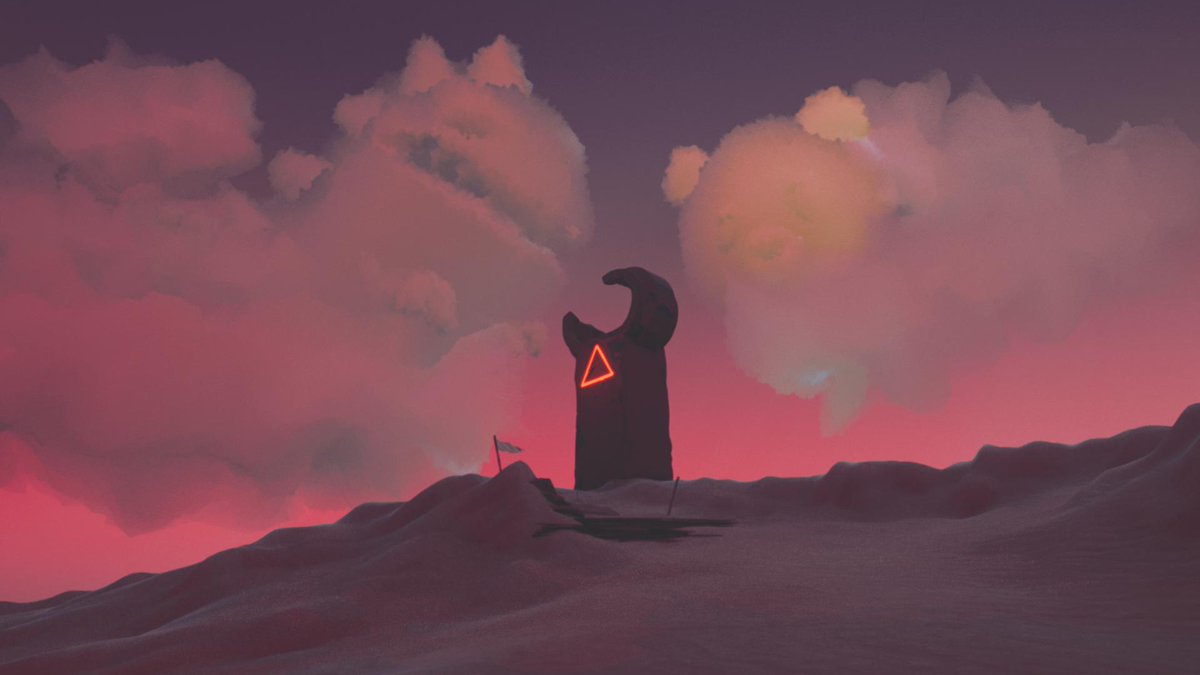 “It’s strange, we’ve gotten so used to the way it looks now, this handcrafted look reminiscent of stop-motion, that if we ever turn it off it looks so artificial.”

That the boy’s movement itself is so engrossing seems apt when the game is about him journeying to find his way home.

Early looks at Revoider got Mini Goliath more attention than they ever expected. But rather than embrace that outside enthusiasm and single-mindedly pursue developing it, they’ve taken breaks to work on smaller projects. Dropship is one of them.

Another is The House in the Woods, a horror exploration game made in 48 hours for the Haunted PS1 Wretched Weekend 1. “You are lost in an endless forest and you have to follow your friends cries for help to find your way around,” explains Paul. “Given the time constraint we tried to do as much as we could with the setting and atmosphere to build tension. The initial jam version was well received, so we spent a few more days polishing it up and the final version ended up being played by a lot of the big YouTubers and managed to retain the top spot on itch for a few weeks.”

These other projects are important for the development of Revoider. They raise Mini Goliath’s profile and provide a lower stakes way to figure out the pitfalls of shipping games. Not only does it allow them to fiddle with concepts that can later be baked into the larger game, they get to see how people play with them, too, which not only provides a certain amount of beta testing, but helps grow the studio’s following as well. 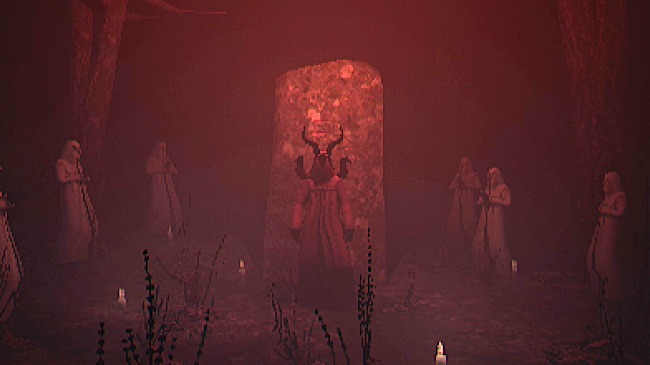 “We had been working on Revoider in our spare time for about a year and it just felt a bit overwhelming,” says Paul. “Chipping away at something of that scale with whatever time you have left in the day could feel like you weren’t making a ton of progress. That’s where the smaller games came in and where Mini Goliath was born.

“While it means progress on Revoider takes a hit, it gives us an opportunity to try different things, prototype certain mechanics and hopefully become better game makers. Our first few games under Mini Goliath all demonstrate concepts we can feed back into Revoider; Dropship’s dynamic gravity system, The House in the Woods looping forest and our latest, unreleased game is an opportunity to further test our stepped physics on a character. They may not all be like that but there’s no doubt Revoider will end up a better game in the long run.”

“We’ve worked with loads of different engines over the years and I don’t think any of this would really be feasible for us without Unreal. All our games are built with blueprints and the speed at which it lets us create and iterate makes a huge difference when you have limited time and resources.”

Updates on Mini Goliath’s next small game will be rolling out this month. Revoider’s development will resume after that game’s release.