This excerpt is from a feature story in Unwinnable Monthly #128. If you like what you see, grab the magazine for less than ten dollars, or subscribe and get all future magazines for half price. 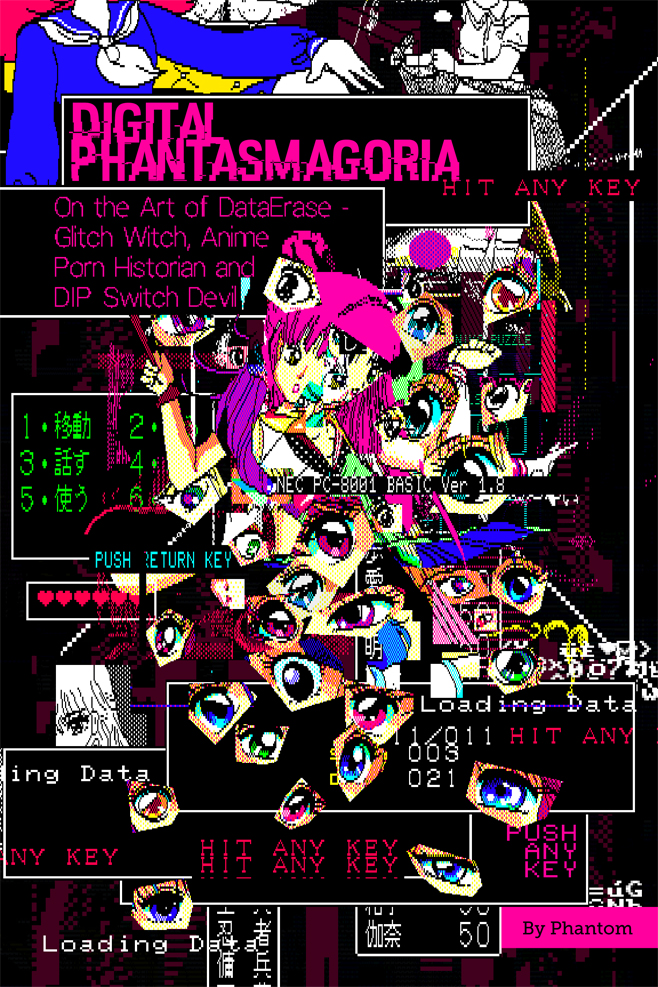 What does it look like when a computer cries? When it bleeds, when it screams and shudders in pain? When it is compromised, when it is asked to do unspeakable things? If it could reflect upon the uses to which it had been put, how wretched would we find its look of despairing disdain, how contorted its face? How long would we find the trails running down its cheeks, what color its tears?

I first heard this song several years ago, on Tumblr in the early-mid ‘10s. During my long nightly walks from blog to blog, there was a certain kind of stark, vaguely intimidating “aesthetic” blog I loved stumbling onto at three in the morning, the cyborges-es, contaqs and postmodernCorruptions that had become one of its calling cards. DataErase was among them. DataErase, full name Maddison “Maddi” Morgenstern. The image described at length above was one of hers, among the first she ever posted. I never saw it then; if I did, I don’t remember it. These blogs all blended together to me, DataErase to ms-dos5 to fmtownsmarty and so on and so forth, not because they were unremarkable or interchangeable – far from it! – but because my tastes were still developing, and because I lacked the context that would make them click. It was only later, much later, when I could tell an FM Towns Marty from an FMV and knew what the 5 in “ms-dos5” stood for, that I could return to them with a new understanding and a new appreciation. DataErase, rediscovered and reappraised, transformed before my eyes.

(By this time she had also transformed in another sense: from “DataErase,” an anonymous, disembodied voice in the shadow of a Berkeley socket, to “Maddi,” the violet-haired “glitch witch” most who follow her will recognize today, looking very much like she’d stepped out of a PC-98 game herself.)

She recently curated two collections of her glitch art, Imperfection End (2012-13) and Nightmare Disk/I Will Destroy Your Mind (2014-15). Inside the former is a folder containing her earliest compositions, and for a while I’d set my wallpaper to a slideshow of those “First 14.” Eventually, I’d seen them so many times that I could name each of them on sight: the bursting, blazing viscera of the “Dissection;” the dark earth-tones of “Secret” and its secret garden; the pastel pinks and violets of the “Magical Girl Transformation;” the tilemapped Frankenstein of flesh and text that composed the menacing “DIP Switch Deity.” The red, the flooding red, the drowning-in-red, the overwhelming, overbearing, unbearable, oppressive red: “I Wish I Was the Prey and I Wish They Would Kill Me.” And of course, Kumiko, who headlines two pictures (“Kumiko,” “Kumiko @ the Racetrack”) and is hidden in several others; finding her was a game.

Though later images are simply numbered, all are unique. Far from random, the words, faces, bodies and body parts (be they disrobed or merely dismembered) that emerge from the murky sea of twisted pixels, like a memory from a mist, express by suggestion, inviting you to construct a narrative around them, daring you to read between the lines and use your imagination to fill in the blanks, as good pixel art tends to do…

Phantom is a purely digital, low-poly entity who writes about videogames at the site SYSTEM/LABRINTH, with an emphasis on obscure games and esoteric analysis. Likes mangos. Twitter @radicalhelmet

You’ve been reading an excerpt from Unwinnable Monthly Issue 128.