The Nameless City, a squarely middle grade/YA graphic novel by Faith Erin Hicks (Friends with Boys, The Adventures of Superhero Girl), has some very heavy themes. Power, privilege, militarism, oppression, and history’s bias are all important to the core message of the novel. Hell, even its title, The Nameless City, refers to how the name of a place is different depending on who you ask, and who is in power.

But The Nameless City is also about two kids doing a bunch of parkour.

We primarily follow Kai, a young teenager moving to the aforementioned Nameless City. Located at the end of an important river, and at a chokepoint leading to the sea, the city has been conquered many times, by many different nations. The Dao people are the most recent conquerors, and Kai is a Dao of great status and privilege. His estranged father is a high ranking general in the army, and his mother is a tribe leader. Kai decides to move to the city to meet his father, and discover his place in Dao society.

What he discovers is something else entirely: the vastness of his privilege. He learns what Dao society looks like from the opposite perspective, that of Dao oppression and rule. 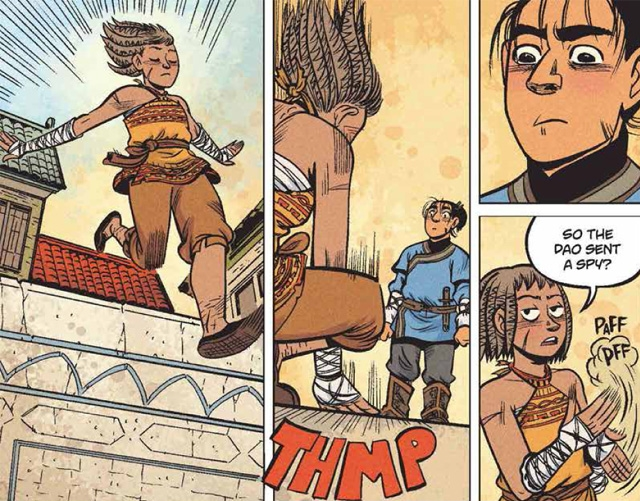 While exploring the city, Kai meets Rat, a seemingly homeless teenager who immediately hates him. Their first encounter goes poorly, with Rat trying to steal from Kai, and the two going on an elaborate chase scene. Rat quickly outdoes Kai, dashing through the streets, leaping onto rooftops, and generally showing off. Kai, envious of Rat’s parkour abilities, and Rat, wanting more free stuff, strike a partnership of sorts. Rat agrees to teach Kai parkour, and Kai agrees to buy Rat whatever she wants.

This is how The Nameless City is about two kids parkouring around as well as privilege and oppression. Alongside learning parkour, Kai also learns a crucial outside perspective, a non-Dao perspective.

The learning process is realistically messy. Kai and Rat argue about the city, its history, Dao rulership, and life in general. They’re coming from two opposite perspectives, and while they do eventually begin to learn from each other, there are growing pains along the way. The book’s chapters are broken up into “Days,” with each day consisting of (among other things) Kai learning something that changes his perspective.

Like its themes, Hicks’ depicts the city in a respectful, detailed, and consistent way. The easiest way to describe the city, and The Nameless City’s aesthetic in general, is historical fantasy. It’s similar to that of Avatar: The Last Airbender: thoroughly historical and clearly Asia-inspired, but very much a fantasy world with its own detailed fantastical history. (Hicks went on to write the Avatar: The Last Airbender: Imbalance series after The Nameless City trilogy.) While this sort of cultural lifting is problematic, I think writer/reviewer Sabaa Tahir addressed the issue best in her review, where she stated, “In Hicks’ sweeping scenes of the city, as well as her respectful attention to invented details of architecture, armor, and clothing, she avoids the pitfall of creating a ‘vaguely’ Asian world that is insultingly monolithic.”

Hicks’ strongest artistic talent, however, lies in her ability to depict movement. Scenes like Kai and his fellow military trainees facing off against an instructor in unarmed combat, or the many scenes of Kai and Rat dashing and leaping from rooftop to rooftop, feel kinetic, weighty, speedy, and cared for. Similarly, Hicks does a great job of anticipation and follow through in her panels, making all the action easy to follow and fun to read.

The color work, done by Jordie Bellaire (Pretty Deadly, The Manhattan Projects), deserves special mention. Her gorgeous and consistent colorwork elevates everything, from the city and its architecture, to its people and their fashion. 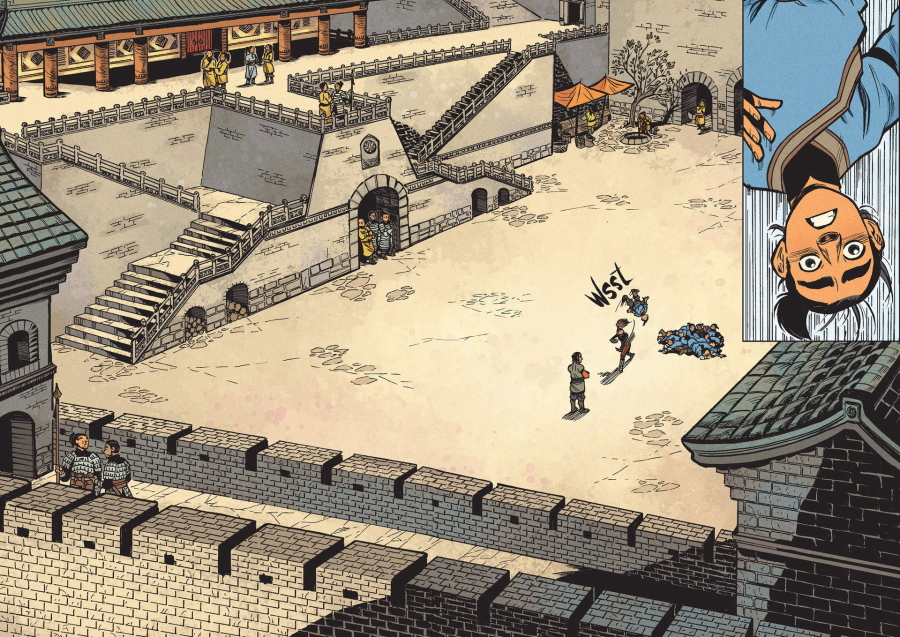 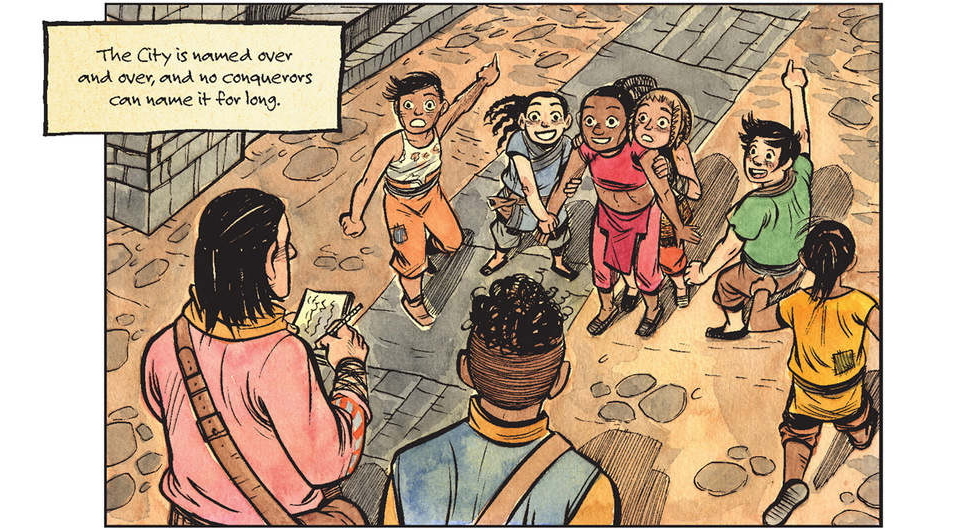 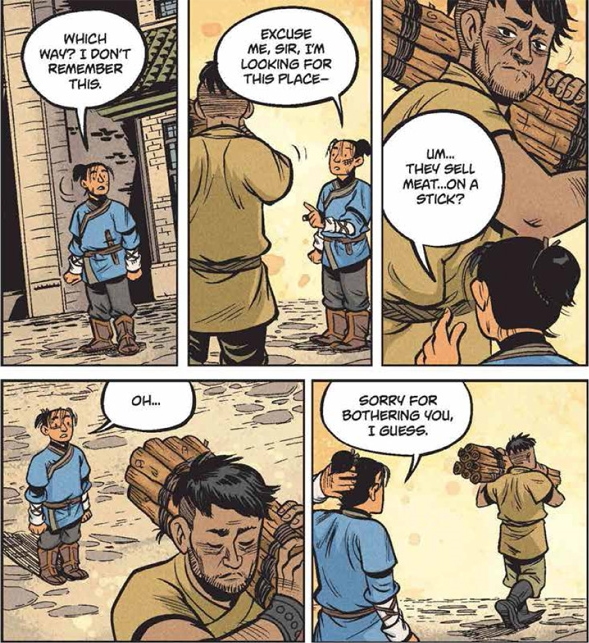 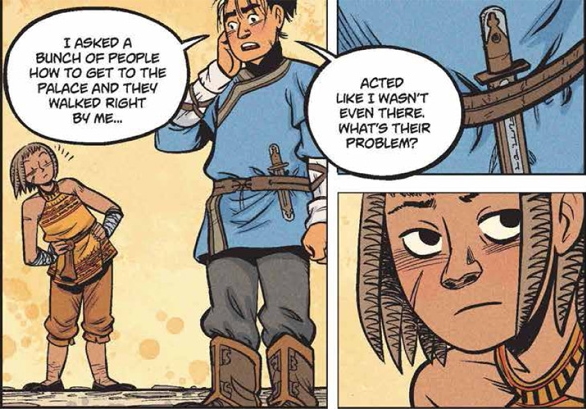 One takeaway I had after finishing the book was that some plot arcs make The Nameless City feel like an introduction for the rest of the trilogy. There are larger plot arcs involving political intrigue, coalition building, faction tensions, and assassination attempts, but only a few of these are resolved, let alone explored in detailed. Looking briefly at the rest of the trilogy, these high stakes arcs take center stage, with Kai and Rat working together to keep the city whole.

The Nameless City is wonderfully detailed, beautifully imagined, and realistically grounded in honest characters with real flaws of perspective regarding oppression and privilege. It has me excited to read the rest of the trilogy, and discover how Kai and Rat’s friendship helps to shape the future of the Nameless City.

Harry Rabinowitz is a writer and editor focused on entertainment and technology. You can find him on Twitter, probably talking about Dungeons & Dragons, @harryrabinowitz.