I can’t really write about Vast: The Mysterious Manor without writing about the art of Kyle Ferrin, which is what first drew me to the game. Specifically, the illustrations of the skeletons which patrol the eponymous manor. That this undead infantry boasted names like Stabby, Shooty and Casty only deepened my appreciation.

The art is what got me to pick up The Mysterious Manor, the skeletons and overall “haunted house” aesthetic are why I chose it instead of its precursor, Vast: The Crystal Caverns, which presented an equally asymmetric take on a more traditional dungeon crawl scenario – a cave filled with goblins and a great red dragon.

The big pitch here is that asymmetric approach. You can play as, in The Mysterious Manor, the evil spider trying to escape the eponymous abode; the virtuous (and one-armed) paladin sworn to destroy the creature; the swarming skeletons, who aim to defend the manor from this do-gooder; the house itself; or the warlock, who apparently pops around and tries to “rule the minds of others,” as the official synopsis asserts.

Each role plays differently, and each one has its own goals, and its own ways of winning. Because of the pandemic lockdown, I have only played Vast a couple of times (it’s right there in the name of the column, after all) and only with two players. It seems like a game that would be better with three or more – as each competing faction got in the way of the others, tripping over one-another in their race to achieve their various disparate ends.

It’s impossible to say for sure, though, without introducing it to a group, which isn’t something I’ve had an opportunity to do just yet. The game also has a solo mode, in which you take control of just the paladin and try to survive the rigors of the manor while gaining “grit” and new abilities, a la a classic tabletop RPG. I haven’t tried that yet, either. Why not, you ask? 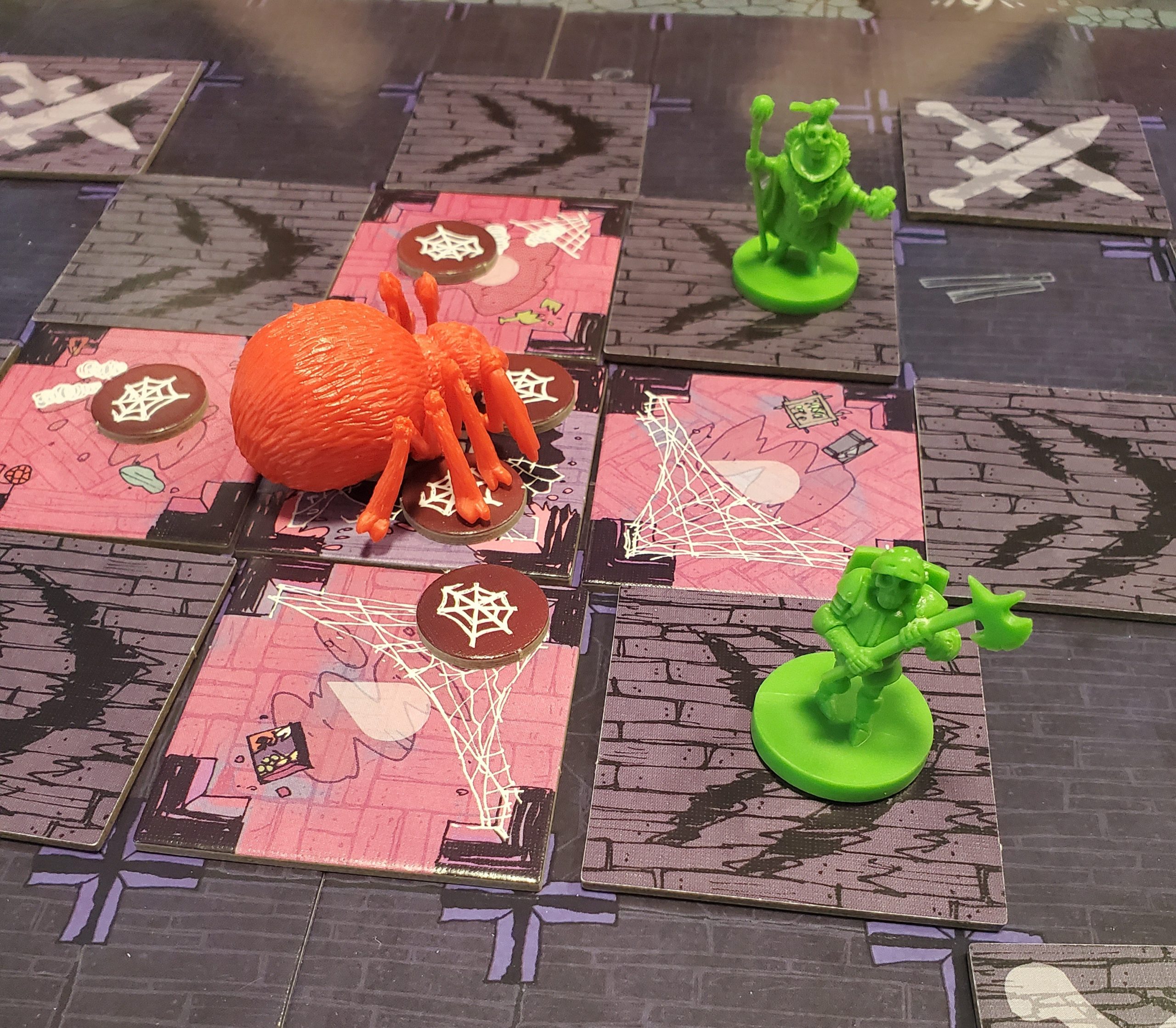 Vast is an extremely fun game, once you figure out how to play it. That “figuring out” part, though, there’s the rub. I have perhaps never come across a game whose mechanics were at once so well-conceived and so poorly communicated. There is, for example, no one place where the main rules are summarized; rather, they are hidden all over the place.

How much Stability do the skeletons start out with? Do the spider’s fangs deal damage to the paladin, or just produce blood tokens? What the fuck do poltergeists do if the warlock isn’t around?

At one point, I found myself Googling “how much Stability do skeletons have?” To be fair, in that case, I had simply mislaid a component that answered my question but, at the same time, that seems like the kind of critical information that should be summarized in the rules somewhere – not to mention the sort of thing that you never expect to learn that Google has an autofill ready for.

This sounds like a very harsh take – and it is, in its way, even while it also isn’t. I said before that Vast is an extremely fun game, and it is. By the end of our first two-person trial run, we were both having a great time. When we tried it a second time, pitting the paladin against the spider, we were having a blast, even if we were still occasionally flummoxed by obvious questions with no apparent answers. 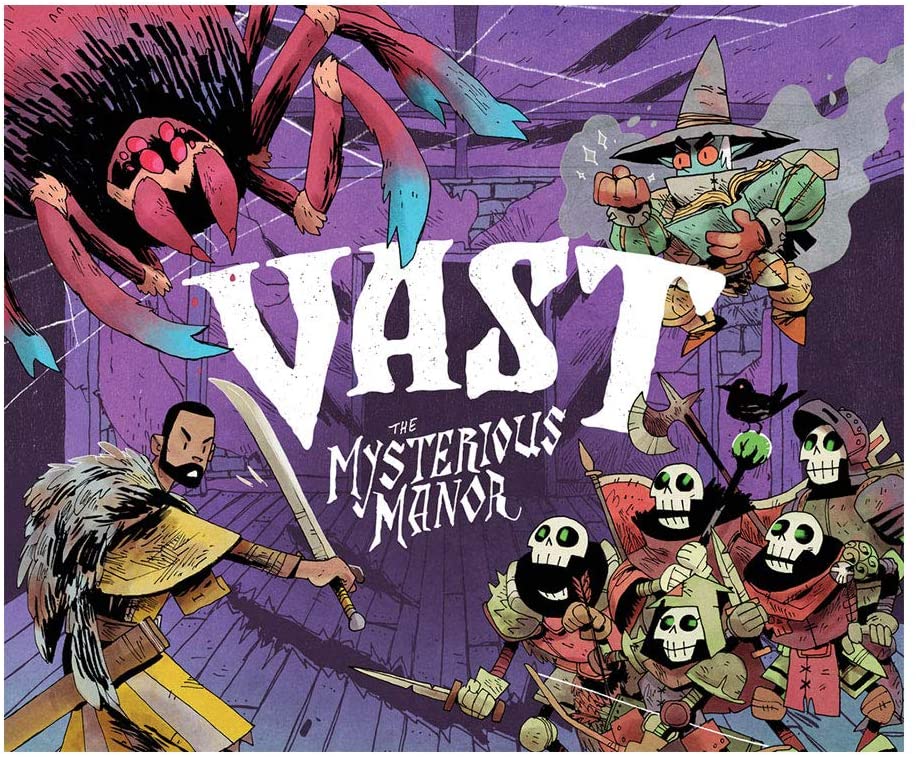 That’s what makes the lackluster presentation of the mechanics so frustrating. It’s an impressive feat for a game to be so enjoyable when you have so little idea of how to play it, but it’s also hard not to imagine how much better it could be if the rules were at all clear.

There’s a lot to love in Vast, and I think it’ll only improve as I play it more – finding hidden rules that actually explain how to play the game, getting more familiar with the ways each of the roles work, and, eventually, incorporating more players. There is an expansion – Haunted Hallways, which adds more skeletons, a new hero, and a whole new role in the form of the Shadow Paladin – not to mention the other Vast game and its own expansion.

More than anything, the aesthetics of The Mysterious Manor are an absolute delight, and I would be happy to have the game just for them. I occasionally pull out the skeletons and other minis for use in D&D, and the art is never anything short of a joy, even down to the illustrations on the individual room tiles that make up the map as you play.

In a detail that is emblematic of the delightful tone of this game that I wish you could more easily get to without having to navigate the confounding and labyrinthine deployment of its rules, each role has a play mat, the back of which features an in-character quote from that role. The one for the skeletons is just a bunch of clacking. Chef kiss. 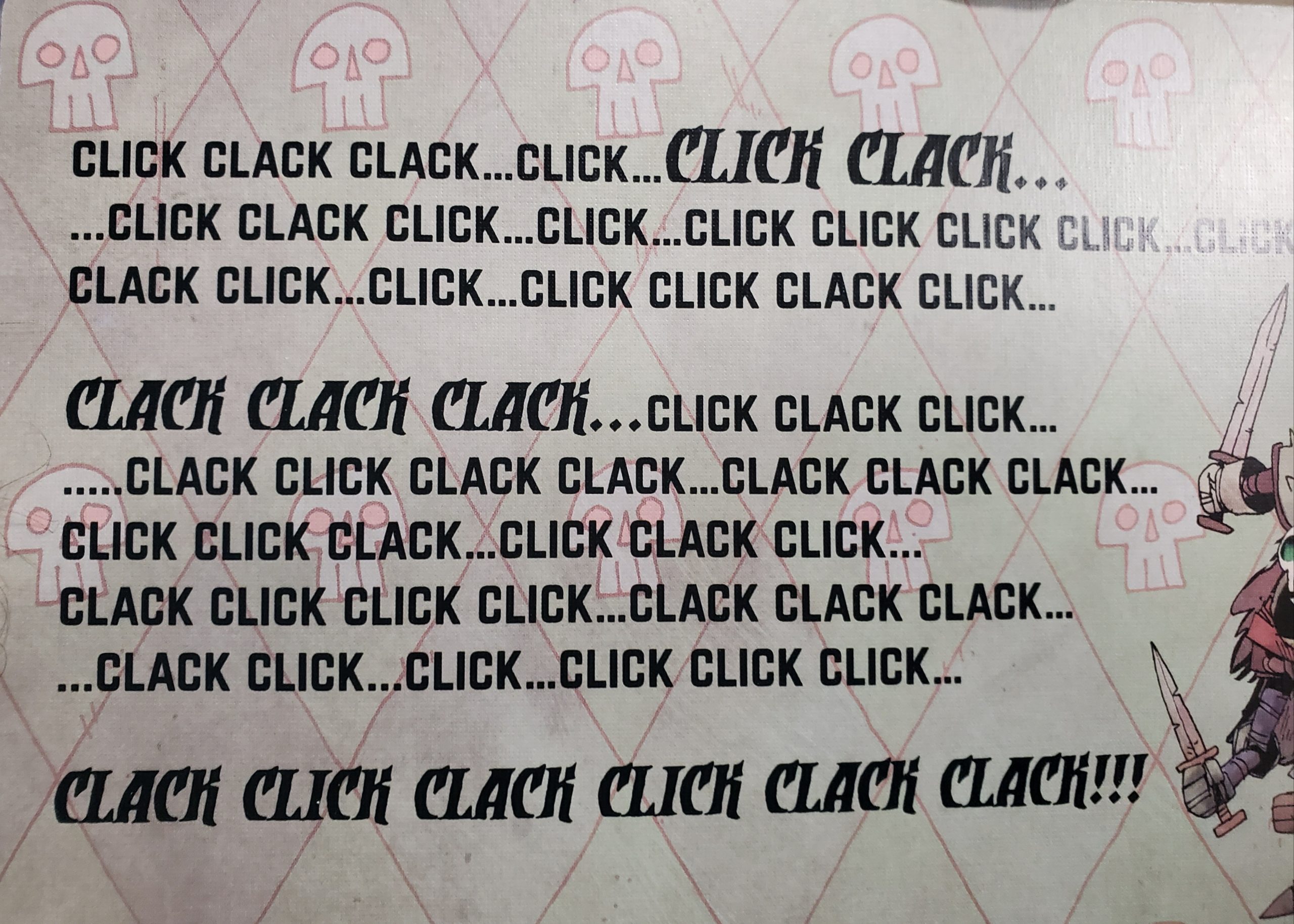 Lost in the Dark: Finding My Way to Descent During the Plague Times
Previous Post

A Long Time Ago: A Star Wars Story

The Reckless Gender Politics of Call of Duty: Warzone