I had never even so much as heard of Bargain Quest until some friends brought it over. (This, back when friends bringing stuff over was still a casual thing that we just did sometimes.) And they had never heard of it until they received it as a gift. Which is all a little absurd, because Bargain Quest is exactly the kind of game I’m always looking out for: fun, quick, easy to play and with low-fi fantasy adventure set dressing.

The (priceless) premise of Bargain Quest is simple: You’re a shopkeeper in a fantasy world where adventurers go off to fight huge dragons, wicked witches, shadow knights, demon princes, goblin chiefs and, my personal favorite, garbage trolls. To survive those fights, though, they’ll need the right gear, and that’s where you come in.

The gear ranges from fantasy standards like scale mail and short bows to demon charms, a star-spangled cat familiar and an ancient relic that looks like Eric Orchard drew it. You can also hire employees that help you fleece adventurers, draw them into your store, or make your items better or cheaper, and you can upgrade your shop to add more storage, more enticing displays, and so on.

This may be a phenomenon unique to my gaming group, but whenever we play Dungeons & Dragons or any other, similar dungeon crawling fantasy game, we’re always a little tempted to just retire from adventuring, settle down and open up a fantasy item shop in whatever town sits beside the mouth of the nearest dungeon and, as such, boasts and adventurer-centric economy. 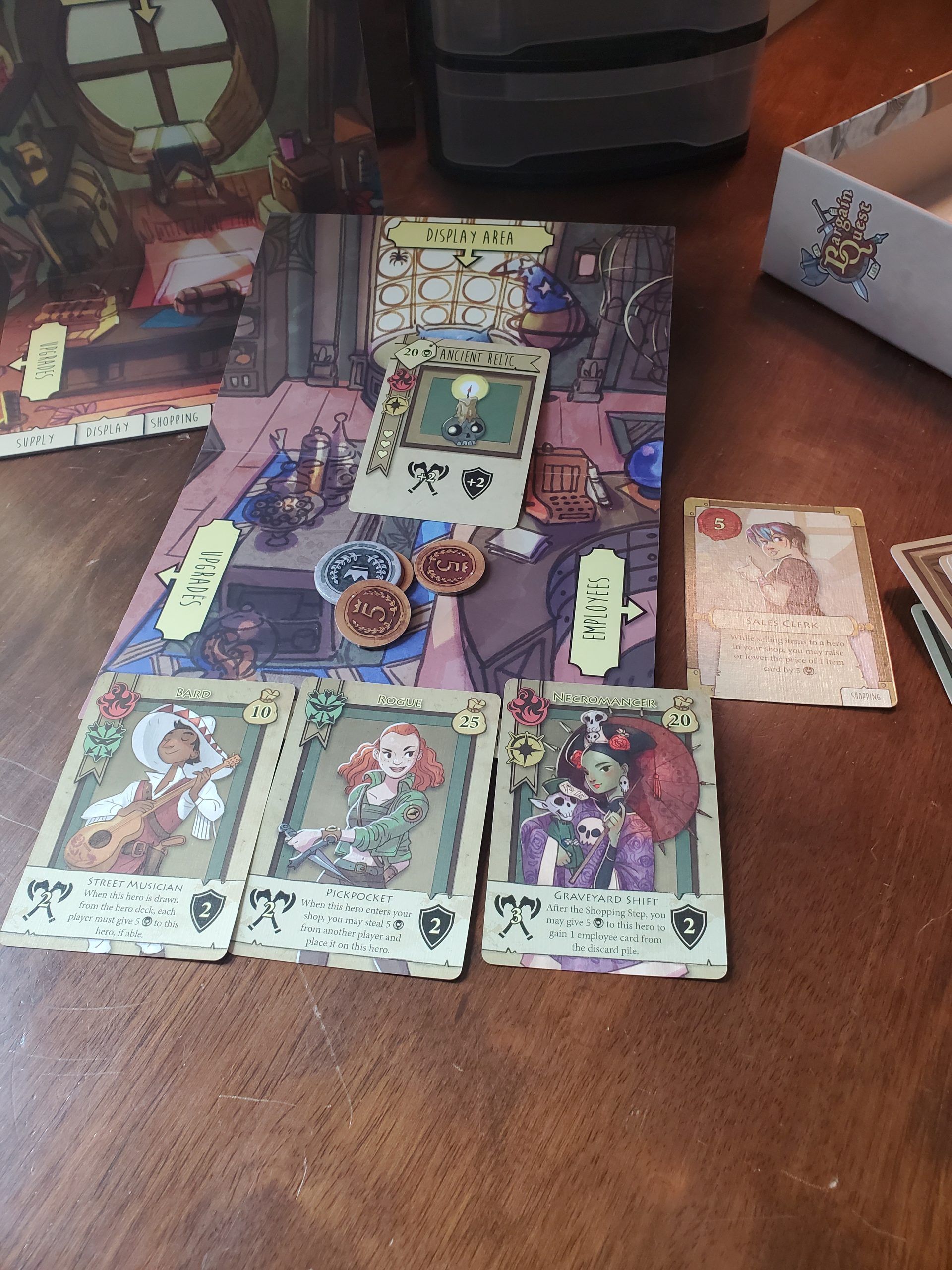 If that is not unique to my gaming group, I have good news: Bargain Quest is the game that finally lets you do just that – and makes it fun, in the process! It’s a drafting game where you pick items to put out for sale in an effort to lure in adventurers – who are also dealt out randomly. You want to take as many of their coins off them as you can, of course, so you can use them to hire employees and buy upgrades for your shop. But you also want them to survive the adventure because, if they do, they come back with pockets full of loot to spend.

The result is an experience that is part competitive and part collaborative, as each player wants to do what’s best for their own shop, but you all want to keep as many of the adventurers alive through their adventures as you can, because rich adventurers are good for business.

The very first thing I noticed about Bargain Quest was the art by Victoria Ying. (The game is a collaboration between Ying and her husband Jonathan.) It’s appealingly cartoony while still having enough sketchiness for the eye to grab onto, and all the cards have a lot of personality, even the ones for the simplest items. (Maybe the very best item card is the one for the invisible cloak.)

You may have noticed by now that art and design are big deals here at I Played It, Like, Twice. And there’s a reason for that. When you’re picking up games without ever having played them – and when you’re probably only going to play them, like, twice – the art and design are mostly all you have to go on. Those, along with the high concept, if there is one, are probably what catch you in the first place, what make you give the game a second look. They certainly are for me, anyway. 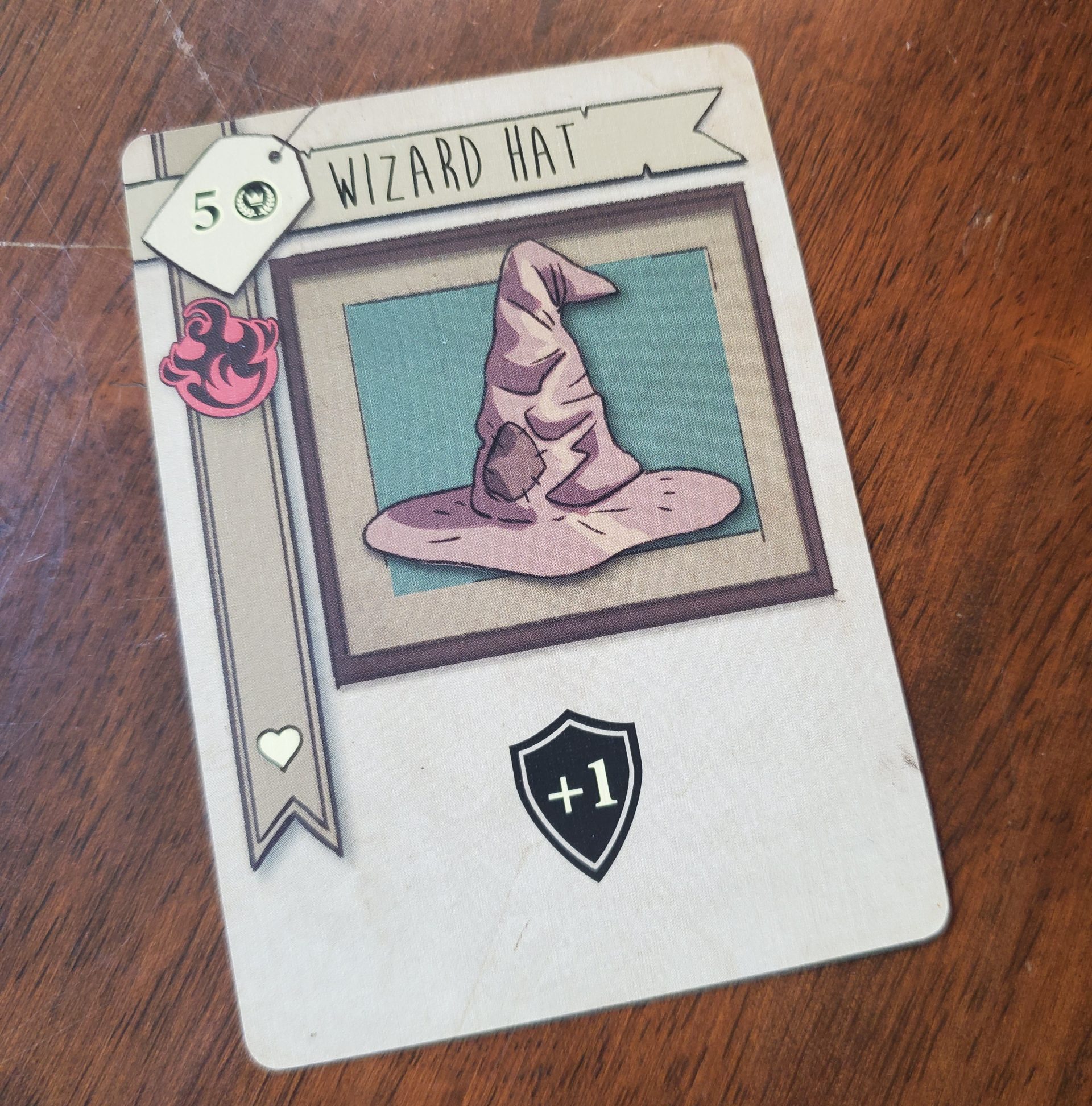 Fortunately, Bargain Quest is a game with much more going for it than just its (very) appealing art. It is, as I said, quick and easy and fun to play with a group. In a rare occurrence for this column, I haven’t actually played this game with only two people yet, though the rules say you can, and I don’t necessarily see why that wouldn’t be the case. Just don’t be surprised if you get a little choked up when you can’t equip the young hero well enough for them to survive their run-in with the vampire queen. That charming character art cuts both ways, after all.

One of the game’s most enjoyable mechanics is the way that the item cards are drafted. Each player is dealt four item cards at random, and you select one to put in your shop. Then you pass the cards to the player on your left, who does the same thing, and around it goes until all the cards have been drafted. This lets you always get first pick on some things, and requires you to always take last pick on others. Sometimes it works out in your favor; other times, not as much. But it’s always fun.

This is the main mechanic that I can see losing some of its pleasure with only two players. Part of the fun of the drafting mechanic is that everyone is pursuing slightly different strategies and trying to complement the item cards they already have. With more players, this introduces more randomness into the item drafting. With only two … not as much.

But again, I haven’t actually tried it, so I don’t know for sure. What I do know is that, when I did play with four people, Bargain Quest was a pleasure to play, and quick and easy to set up, especially compared to a lot of the miniature- or token-heavy games that often boast these kinds of fantasy themes. And it’s a game I would happily play more than, like, twice…

Lost in the Dark: Finding My Way to Descent During the Plague Times
Previous Post