As I’ve mentioned a few times now in various other places, I got really into 5e Dungeon & Dragons literally just before the plague hit and everyone went into lockdown mode. I’ve since tried playing online in a variety of forms, but it just isn’t the same. So, in an effort to scratch that itch of pushing stupid little miniatures around on stupid little dungeon tiles (which are, let’s be honest, two of my very favorite things), I got into Descent: Journeys in the Dark.

Descent is a game that I have wanted to play for pretty much my entire adult life. Originally released in 2005, it is, in many respects, the gold standard of the dungeon crawl board game, even if it was predated by several others and, in execution, initially based on the ruleset for Fantasy Flight’s licensed Doom board game.

Descent is also, in many ways, the epitome of the kind of game that this column was designed to highlight. Games that look amazing, but often prove inhibitively expensive to acquire and frustratingly complicated to set up and/or actually play. Fortunately, while Descent may well be the former, it proves not to be the latter, which I will get back to in a moment…

Anyway, in a fit of COVID-induced mania and an effort to scratch that at-home D&D itch, I picked up not just Descent (in its maybe-going-out-of-print 2nd edition) but several of the expansions. Maybe most of the expansions. I have been advised by my attorneys not to get too specific. 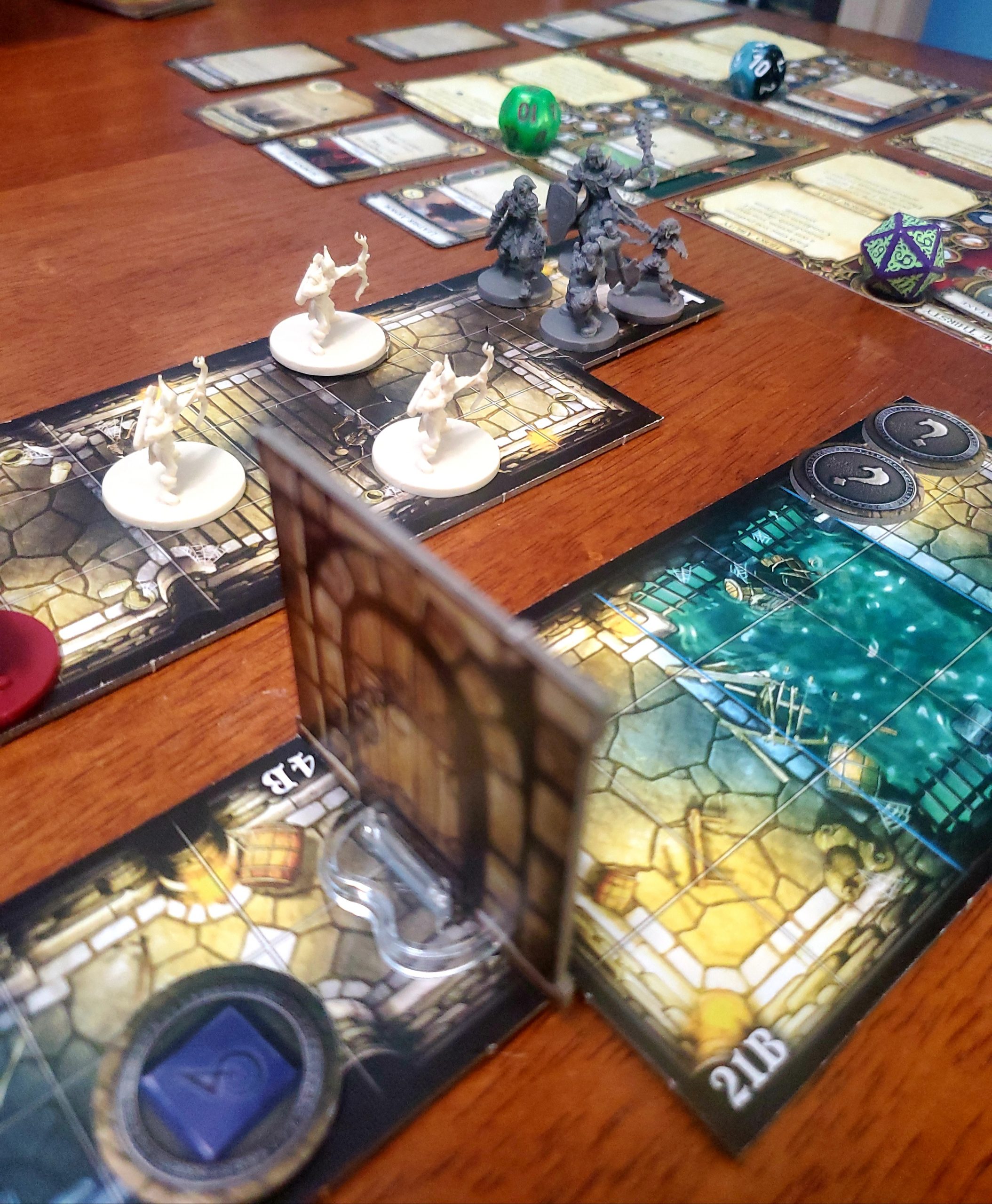 The idea was that Descent was like D&D that I could play by myself, if it came to that, or that Grace and I could play together without the need of gathering a large gaming group. I know that D&D can also be played with only two people, but I think it loses a lot more of the fun than Descent probably does.

Thanks to an optional co-op version (which relies on either an app or specific adventure expansions that have to be purchased separately), Grace and I could even theoretically combo our forces to go up against various gribbly monsters in the caves and catacombs of the realm of Terrinoth, where Descent takes place.

All of these were absolutely selling points, but what really drove my sudden obsession (besides the blazing trash fire that has been 2020) is that I had always wanted to give the game a try, and since the world seems like it’s probably coming to a slow-motion end, I may as well do it while I can.

It turns out that my timing was good in some ways and very bad in others. I have seen no specific confirmation that Descent in its current iteration is going out of print, but where it used to be a fixture of gaming stores, now hardly any have any stock, or any idea when they’re going to get more. Virtually everything but the core game itself shows on backorder even from Fantasy Flight, with no indication of when or if it will come back into print.

So far, Grace and I have played Descent only a few times, and only the “regular” way, where one player acts as the “Overlord” – Descent’s version of a GM – and controls all the monsters. What’s more, we’ve pretty much only used the stuff from the core box, including playing through a few of the quests and encounters contained in the campaign that comes with the core game.

I’m happy to report, however, that – so far, at least – Descent is everything that I had always hoped it would be. Whenever you drop the kind of money that even a game like Descent’s core box costs – and then invest the time into learning the rules, setting it up, and playing it – you’re always kind of holding your breath that you haven’t wasted both. This goes double when, like I did, you also pick up several of the expansions before you’ve tried out the base game. 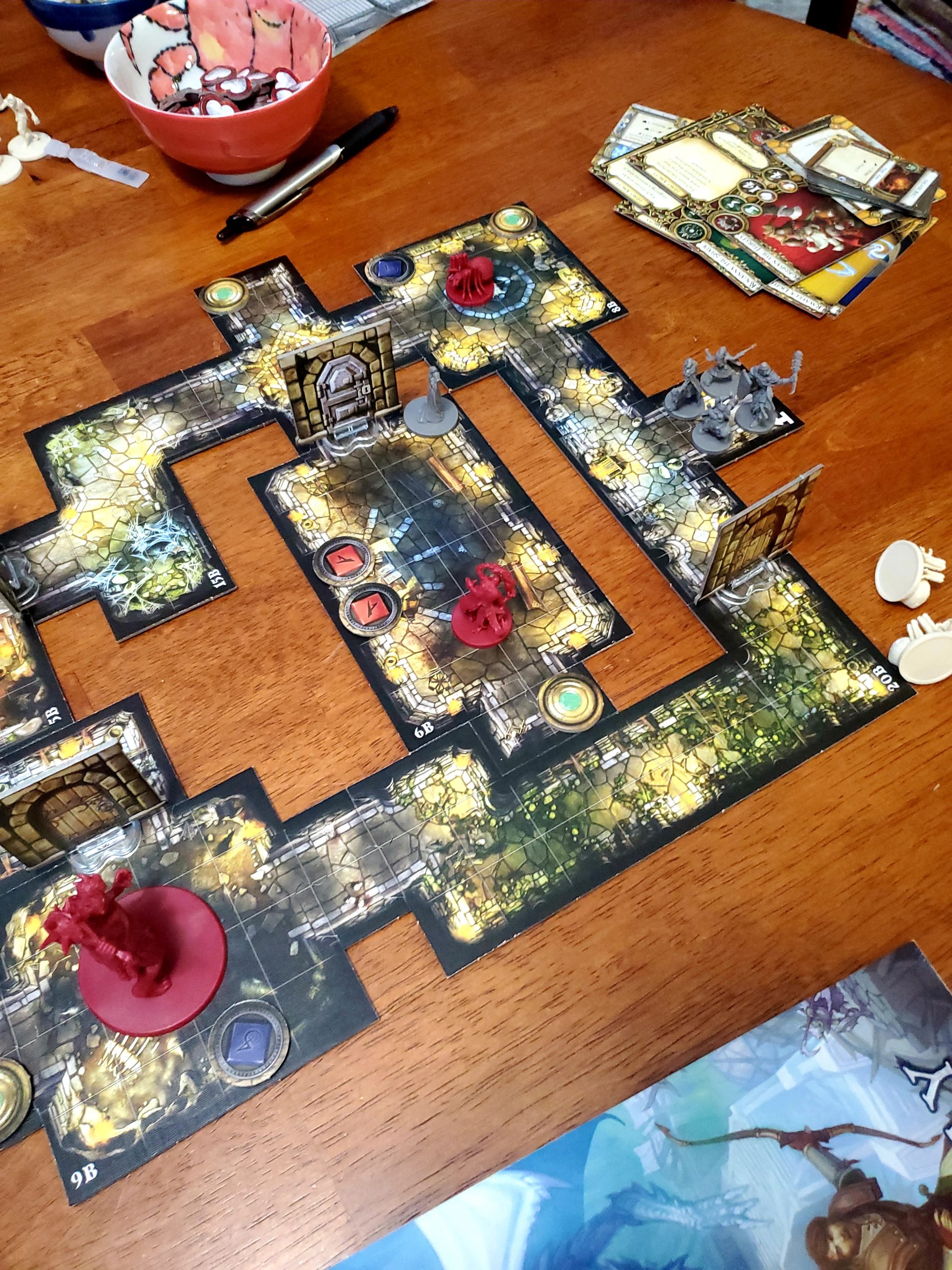 Fortunately, at least this time around, I don’t appear to have made a terrible mistake. Descent isn’t D&D, but it’s (almost) everything I ever wanted in a dungeon crawl board game. The setting is a fun mix of classic tropes and World of Warcraft-style cartoon gloss, with enough of its own character to keep it interesting. The miniatures look, frankly, phenomenal – and there are a lot of them, even in the core box alone. The dungeon tiles are sturdy, well-designed, and they lock together with handy little jigsaw teeth to keep everything from sliding all over the place when the cat (inevitably) jumps up onto the table. And while they’re double-sided (as tiles in these games nearly always are) they have “overworld” maps on one side and “dungeon” maps on the other, meaning that you’re less-than-usually likely to need both sides of a tile at the same time.

Perhaps most importantly, the game is relatively painless to set up and easy to play, with a session only lasting an hour or two. There are problems, of course, such as line-of-sight rules that are not sufficiently clear (a peril that I have encountered in pretty much every dungeon tile-based game I have ever played), but so far we have been able to set up a game in a matter of minutes, and play through an entire encounter in less time than it takes to set up some of Descent’s peers.

With a whole host of expansions and such, there’s a lot more to say about Descent down the road, but for now, I’m not regretting my decision to take a journey into the dark and, in this day and age, that’s about all we can really hope for…

Descent, Descent: Journeys in the Dark