As often happens playing the recent From Software release, Sekiro: Shadows Die Twice, I’m intractably stuck in a sword fight with a difficult enemy and I am deeply overwhelmed. At some inevitable point, my posture will break, my feeble attempt to deflect the incoming blows will fail and I will be struck down. I am either brought back immediately, or I “die,” having run out of chances for resurrection and return after a short delay. But I always, always come back. My stubbornness as a player, analogous to the characteristic stubbornness of the Shinobi called Wolf, whom I control, doesn’t allow me to quit. And the game, at first, seems to support this approach. As in From’s Dark Souls series, which precede Sekiro, the best (only?) way to improve is to throw yourself at the brick wall of its difficulty and die repeatedly until you figure out a way to make it through.

A dozen or so attempts later, however, the game introduces a wrinkle: Dragonrot. I discover that my repeated resurrections are responsible for the disease, which is spreading around Ashina, the fictional setting of the game, and infecting people, including several of the non-player characters I’ve interacted with. From the solemn, helpful sculptor in his dilapidated temple, to the item seller by the smoldering battlefield, to a brittle old woman who mistakes me for her son and has entrusted me with her precious prayer bell, all are equally susceptible to this illness, which racks their bodies with coughs, stains their lips with blood and shatters Ashina’s unsteady, and fleeting peace.

We are the cause, the game constantly reminds us. Wolves, tearing at the open wound of the world with our fangs. Our continued actions prevent the wound from healing properly; we open it up, again and again. At the same time, we are beckoned toward a seemingly noble goal. We are asked to press further, even as we are forced witness all the damage left in our wake. 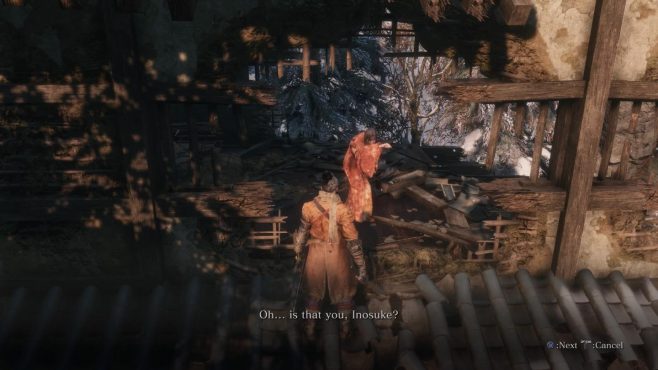 In Shusaku Endo’s novel Silence, set during the early Edo period, the Jesuit priest, Sebastião Rodrigues, travels to Japan in order to spread Christianity to a country from which it has been violently purged. He is captured and held captive by the authorities, who torture and murder several Japanese Christians in front of him in an attempt to convince Rodrigues to apostatize and renounce his faith. Instead, he stubbornly holds onto his righteous self-perception, and more Japanese continue to die for its sake. At one point, a government translator admonishes him: “Father, have you thought of the suffering you have inflicted on so many peasants just because of your dream, just because you want to impose your selfish dream upon Japan.”

Sekiro’s Wolf, firmly enmeshed as he is in feudal Japanese society, doesn’t occupy the same outsider position that Rodrigues does. But as players, interacting abstractly with this fiction, we certainly do. In a reflection of the interpreter’s grilling of Rodrigues, the game seems to want to know why we think our dream is so important that innocent NPCs need to suffer for it. The game wants to know how much suffering we’re willing to endure – not internally as is normally the case, but externally – before we abandon our faith in our mission. It seeks to measure how important any given boss must be that we would climb a mountain of bodies in our endless attempts to best them.

Sitting literally above the fray, in the Ashina clan’s vertiginous keep, the Dragon’s Heir, Kuro, directs us, his faithful Shinobi. It’s for his will that we are sent out, to help accomplish his mission: to sever the immortality that enthralls men and that has thus corrupted Ashina’s leadership. We are his spear, we prod at the edges of his empire to bring about this seemingly noble conclusion. Why then, does the mission begin to feel increasingly twisted, invaded and interrupted by the ceaseless hacking of tortured coughs, spoiling the elegance of a clean deathblow, tempering the righteous fury of a driven and loyal Shinobi? 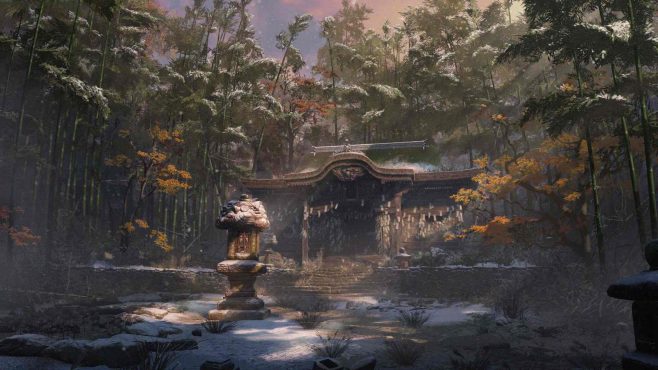 In Silence, Rodrigues’ partner, Francisco Garrpe drowns trying to save a group of Christian peasants who have been thrown from a boat by government soldiers. “At least Garrpe was clean,” argues the translator to Rodrigues, whose continued life promises continued retribution extended to others. Can the Wolf ever be clean? The sculptor, himself an ex-Shinobi, warns Wolf of the karmic debt those who deal in death and violence inevitably become weighed down by. The most ideal ending available in the game is for Wolf to take up the sculptor’s endless task, to participate in a cycle that begins with rage and hatred and will, by all rights, end with it.

To feel heroic, one must feel noble. But Sekiro purposefully undercuts that feeling of nobility with its ever-encroaching Dragonrot. Wolf’s continued life must come at the cost of another’s suffering. Rodrigues in Silence ponders this contradiction in his own mission: “He had come to this country to lay down his life for other men, but instead of that the Japanese were laying down their lives one by one for him. What was he to do?” I know that my Shinobi has good intentions, I believe that he wants to succeed in our mission, but can we honestly say we’ve succeeded when we’ve brought our sickness with us and allowed it to infect so many of those we were trying to save?

It makes me wish I was better at this game, better at parrying, better at dodging and counter-attacking and leaping, at the right moment, over the deadly sweeps of the enemy’s sword. I wish I could dispatch even the most intimidating bosses with deadly efficiency. But I cannot, I fall again and again, my ignorance or my nerves or my overconfidence all conspiring to bring me up short of victory. And the dragonrot continues to spread, infecting more NPCs, more innocent lives.

After countless attempts, I finally bring down my foe. Wolf pierces the heavy armor with his sword, jerking it violently upward as he rips it from his destroyed body, painting the sky briefly with splashes of arterial spray. After the animation completes I am gifted with the memory of the fight, and a prayer bead, both serving to bolster my resolve. At the nearby Buddha idol, Wolf presents a Dragon’s Blood Droplet, an item that heals those who’ve been afflicted with Dragonrot. To all appearances, I’ve reversed the damage, cleaned my hands of the blood I’ve spread around, tracked everywhere, on the walls and floors. But I wonder, if I look closely, whether I’ll still be able to see the scars, if the optimistic ending I’ve sought was just a dream, with the wound continuing to seep, unseen but just as consequential.

The Beatdown is Coming Back