As a guy who loves and still watches a lot of cartoons – both because they tend to be better than live-action stuff these days but also because animation provides a lot more freedom without the risk of uncanny valley nonsense – of course I’ve seen Foster’s Home for Imaginary Friends. Hell, I designed phone cases and t-shirts of the main cast at one point. It’s a great show with surprisingly clever humor and a fantastic visual style. But here’s the thing: it’s also extremely fucked up when you really stop and think about it.

The core premise is that there’s a foster home (really it’s more like an orphanage) for, well, imaginary friends who can no longer live with the children who created them for one reason or another. Episodes follow the exploits of a core cast of characters (some imaginary, some not) as they get into trouble, have adventures, do sitcom-type stuff and so on. It all seems whimsical and nice on its face but seriously, let’s go over this again. This is a world where children can create life with their imaginations. These imaginary friends are “imaginary” but only in the sense that they were born via imagination. In this world, they’re very much real. They can interact with the real world, talk to and be seen by everyone, require food and rest, use the bathroom (seriously), get bored and even get morning breath. 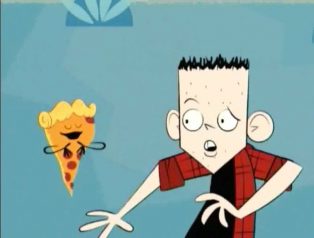 On top of the awkward questions that come up when you try to understand literal children creating literal life with their minds, there’s also the matter of these living creatures being conjured up out of nothing and then eventually being abandoned. Maybe the kids get “too old” for an imaginary friend (even though adults can still see and interact with them regardless). Maybe the family loses them while on vacation and can’t find them again. There’s a lot of questionable morality here, and these imaginary friends seem to be treated like a hybrid of pet and human family member on the reg. What kind of laws are in place to protect them? Are there any laws to protect them? Are they not considered worthy of the protection of the law because they’re imaginary despite clearly being tangible (and sentient)?

I haven’t even gotten to the really messed up stuff yet!

The basic setup is rather uncomfortable on its own but then we get to things like imaginary friends being able to hold down jobs, be held in inhumane conditions (like a pet crate), never aging and instead of being adopted out to child after child for decades. There are even imaginary pets! There’s an entire episode devoted to imaginary puppies and, like, what?

But the most nightmarish moment by far has to be a moment from an episode titled “Seeing Red” where main human character Mac’s older brother (and requisite bully) Terrance tried to metaphorically fight fire with fire by imagining up his own friend to keep Mac’s friend busy and leave him vulnerable. No, that’s not the worst part even though it’s definitely messed up as hell. That honor goes to Terrance’s first attempt at creating a friend. He tries to create something (again, really messed up) and gets distracted in the process, thus giving life to a sentient slice of pizza that wants nothing more to love and be loved and then Terrance immediately eats it while the pizza is screaming the whole time.

Look, I still love Foster’s Home for Imaginary Friends. Like I said at the beginning it’s a great show with clever humor and a great style. But it’s also a horrible nightmare world full of dubious ethics and human rights violations. And a few too many puns about cheese.