If, like me, you’re mentally incapable of experiencing reality during March 2020, it makes sense to virtually explore an island where the boundary between worlds is thin. In the medieval, fantastical northern Europe of Seers Isle, a group of shamanic initiates sail to an island where they will either ascend its summit and be granted shamanic gifts, or . . . mysteriously disappear and die. “Mysterious death” might not sound like an ideal escapist vehicle during these times of self-quarantine and high anxiety, but hear me out.

“Here, in the confines of my domain, I am almost transparent, light, like a sylph stripped of its wings.”

The game begins with what feels like third-person narration, something that’s easy to take for granted. The narrator explains the basic premise of these initiates’ appearance on the island; the narrator describes the initiates’ actions and expressions; the narrator lets you know when you can make choices that will affect the outcome of the game.

But – and this is a spoiler alert, so stop reading if you’re not into that sort of thing – it soon becomes clear that the narrator is a spectral figure who has been seen multiple times by the initiates. She has dark hair with tall, thin deer antlers protruding from her forehead. Her name is Rowan. Slowly, interwoven with the journeys of the initiates, you learn her story.

Rowan was blamed for the death of her clan chief’s son, and accused of sorcery. “Whether or not you are responsible for my son’s death, you used magic without having been initiated,” the chief tells her. “I decided to let the seers judge you.” The chief sent Rowan to Seers Isle. Rowan’s status as “alive,” “dead,” or “immortal” is never explicit – but it is clear that Rowan has powers deemed forbidden by the powers that be in her world, powers that do not come from the seers. She describes her status in limbo as “disembodied solitude,” “the in-between world,” “my prison.” As she moves in and out of visibility to the other characters, she says “I feel my anchoring in the world of men escaping me again.” This is how I feel in the outside world on normal days, living in varying levels of solidity. Rowan hates being between worlds, but I love inhabiting liminal space, both in my waking life and in games. It’s what I liked about Control’s Jesse Faden. 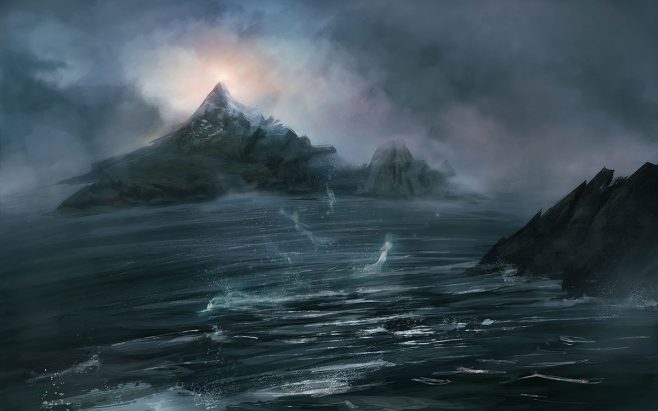 Of course, regardless of my affection for disembodied solitude, I suppose it would get old if you didn’t choose it. Rowan’s life was controlled by her former clan chief as surely as it is now controlled by the seers of the island. Her power threatens them all; it’s dangerous because it comes from an unknown source, undisciplined by external sources. The game never specifies the exact nature of her power (at least, not in the two times I’ve played it through), but I like to think of Rowan’s magic in terms of the Gnostic concept of gnosis: “transcendence arrived at by way of internal, intuitive means.” Rowan hasn’t transcended because the seers gave her permission; her power is innate.

As much as I appreciate Rowan’s power – and appreciating mystical power is a theme in my life as well as in this column – I also appreciate that Rowan is a great storyteller. This is true before she is even introduced as a character, as she narrates the early game. “The undines, the spirit protectors of the sea, have decided, this time, to let [the initiates] pass,” she said. The game’s language, Rowan’s language, is beautiful. For me, this is one of the most appealing methods of escapism embedded in the game. A lush setting, a powerful sorceress and Rowan’s language tying it all together. Considering what’s going on in the outside world, I’ll probably remain on Seers Isle for at least one more playthrough. Maybe I’ll “bury myself in the depths of the earth, between rock and root, where shadows reign.”