Developer Andrew Brophy tells me that yes, the aesthetic influences for Knuckle Sandwich are somewhat obvious. Tribute is flattery though, and even so, Brophy isn’t interested in merely recreating the classics. In fact, he isn’t much of a fan of Earthbound, and his game definitely shows the divergences once you start mucking about.

Knuckle Sandwich cribs from the best of the Game Boy Advance era, with sprites rollicking and clashing about in a cyclone of colors. It’s girded by an RPG frame, but the Brophy tells me that the bulk of the game owes more to Warioware and late-era Pokemon’s double battles than turn-based menu combat, and the demo backs this up completely. What I played was already charged with electricty, a stage dressed with the trappings of a well-lived life, unafraid to get weird.

It’s that courage that has me most invested in what Brophy’s trying to create here. He describes the game as operating on an internal manifesto acted out by an imperfect protagonist and a duplicitous narrator named Busdriver. He’s a carnival barker equally invested in busting the player as well as the characters within Knuckle Sandwich, leading a production more in line with the weirdo-driven narratives of the Coen brothers than the more typically saccharine affairs of JRPGs.

Knuckle Sandwich is zoning in on that vibe with pinpoint accuracy as far as I can tell, and Brophy says that most everyone else who has tried the game picks it up immediately as well. Each fight is a mini-game that often plays out in a Windows 3.1 border, forcing the player to pick through the absurdity for context clues and quick thinking. There are some stats but you can’t min/max your way to brute force the ending.

Brophy’s work here is cheeky and meta, but has a distinct story to tell, drawing from every angle of Brophy’s life so far. But most of all it looks to be an emotional romp, a mine-cart ride that leans into every curve so as to keep the player, the narrator, and the creator invested and entertained throughout. 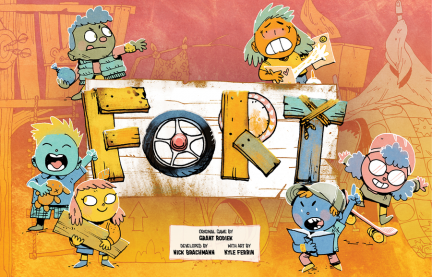 Leder games has been cooking with gas lately, in no small part thanks to Root, though Vast is a dungeon-crawling treat and the hype is real amongst true empire builders for Oath. On my money that last one is a little too much at the moment, but that’s all well and good, because Leder is also fixin’ up a more even-keeled card game on the rear burners with Fort. I was surprised there weren’t more demos for this one, though perhaps the fact that it’s still simmering and the show floor had a number of disease-conscious dropouts explains this for the most part.

As explained by the volunteer who showed me the game, Fort is in fact the first title from Leder that wasn’t developed in house. Previously known as SPQF by Grant Rodiek, he and Leder games have teamed up to re-theme and update it as a neighborhood battle for territory, friendship, and latchkey supremacy. Built on the blueprints of classic deckbuilders, Grant and Leder are looking for a new approach to the way cards change hands in these kinds of games, keeping the interactivity high and less of a solitaire-with-friends experience.

Each player is the leader of a faction of kids trying to build up your own fort with allies and resources. The cards play multiple roles in these functions, making small hands more versatile. Because of the various suits, each player will likely want to pick their lane rather than trying to dominate every possible permutation, which makes it easier to shift the victory conditions beyond victory points. As play goes on, asymmetry takes hold as each player earns different perks as well, but the balance of each turn is choosing which other neighborhood miscreants to draft and steal into your fort, and which to leave behind for the others to take a swipe at when their turn comes.

This is a strong middle-ground game, with a few quirks to pick up early on but the flow settles in after turn two. Fort leans hard on the theme and the art, but to its success—a gamified metaphor of a bygone age, where randomness rules and the best laid plans gone sour turn even the most hard-hearted toddler tactician. As such the initial learning curve is more of a small hill to Root’s cliff-like early rounds, though the latter has longer-lasting satisfaction for multiple games. But I’m really keen on where Fort is at, with cards flying and alliances constantly shifting in the never-ending battle for pizza and toy dominance.

While playing the Netrunner tourney at PAX Unplugged, the most frequent topic of my eavesdropping was Crokinole. Rumor had it that so-and-so brought a board, that there was a vendor selling pucks over there, that making your own was easy but also quite satisfying. But that tournament frayed my neurons, and I kinda forgot about Crokinole until I was wandering PAX East in the midst of having my neurons re-frayed.

Before me were a few rows of glorious seating, and beyond that, round wooden tables that were just satisfying to behold on a guttural level. I hate to go on about craftsmanship but these tables were so, so smooth, surrounded by a soundscape of thuds, plinks, cheers, and groans. My buddy and I found an open spot and got into the rules, lovingly photocopied in raw paragraphs.

Crokinole is 360° Shuffleboard for folks who like a good seat, unless you have a high table I suppose. You can go one-on-one or teams of two, and there’s a few little pegs in the center around a hole shaped exactly like the baby pucks each player is flicking around. You want to get your pucks in that hole but it’s difficult—the fine motor function of our fingers isn’t used to the sawdusted colosseum just yet, and almost every shot feels overpowered. This is of course something of an advantage if you’re popping off at your opponent, which you are required to do if they have a piece on the board.

And that’s pretty much it. Shoot, wait, shoot again. There’s a weird scoring system that amounts to like first to five wins a round, best of 3 wins the game. We played for two hours and only the first fifteen minutes was to enjoy the sit. You can’t help but indulge in the performance of some eyeball geometry but the casuals can’t predict every influential element so we’d just line up and go, go, go again. We were asked with askance glances to share the joy but we couldn’t, we didn’t dare let slip the frictionless magic.

NISEI is Building a Beanstalk by the Brick