Everyone knows GameStop isn’t long for this world. The major games retail chain has been struggling for years, and with recent store closures and layoffs making headlines, its demise might be here sooner rather than later. There’s always the possibility it will make a massive turnaround, but that seems unlikely given how the company’s strategy moving forward already feels stuck in the past. No one seems able to envision what the company’s future could possibly look like (including industry analysts), and while the brand might continue in some form, its current incarnation appears as good as dead.

Despite everything that sucks about GameStop, I’m still going to miss it when it’s gone. Sure, their stores have all the charm of a pawnshop, their business practices are suspect and I leave feeling worse about myself than when I walked in. Yet I still find something vaguely therapeutic about browsing their shelves, even though they’re rarely the best option for finding what I want and there are 50/50 odds something weird will happen when I check out (I might have bad luck, but I doubt it). So, why does my brain insist on clinging to such a frustrating guilty pleasure when better options exist?

The answer might involve Swiss mercenaries and the nefarious nature of nostalgia.

In middle and early high school, I spent several years living in a remote town near a small Air Force station where my dad worked, not far from the Canadian border. We’d make monthly shopping trips to the closest suburban metro area about 90 minutes away just to get the hell out of town and see something, anything that felt familiar, even if all that meant was shopping malls and chain restaurants. That also meant making regular visits to Software Etc. (later absorbed into the GameStop corporate empire). It became a home away from home, somewhere I could find brief camaraderie with someone, anyone else who wanted to talk about games as much as I did. 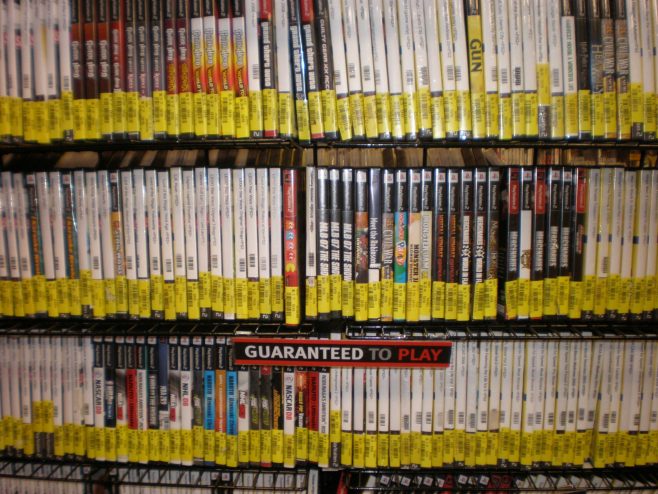 I’d spend hours reading the backs of boxes of games I couldn’t afford and flipping through the pages of magazines I had no intention of buying while my parents perused the rest of the mall. It became a necessary escape from the corrosive isolation of perpetually being treated like an outsider at school; in six years there, I rarely left the house. I missed where I grew up before in suburban Sacramento and never adjusted. If I couldn’t find anywhere to belong in our backwater burg though, at least I could find some sad semblance of community by talking shop with whoever was behind the counter at the games store. Before long, I was on a first-name basis with the staff.

In hindsight, I was also an insufferable loiterer, asking inane questions about pre-order bonuses or whether the Dreamcast was going to be good or whatever other nerd trivia was running through my anxiety-addled teenaged brain. It turns out a mall videogame store wasn’t a good place to develop my social skills. Despite lacking the self- and situational awareness required to realize that I was annoying as hell, they’d at least tolerate me being around, and that was more than I could say for anyone or anywhere else in the cultural dead-end where we existed but would never truly call home.

Now as an adult, I realize the mall sucks and GameStop sucks and I’m not supposed to like these places. The eventual byproduct of a long series of mergers and acquisitions between competing games retail chains in the 1990s and early 2000s, GameStop feels like the homogenized physical manifestation of the ass end of capitalism, and it’s depressing. For an aggressively cutthroat business that arguably leeches off the games industry as much as it supports it though, one would think it’d be better attuned to the basic free-market principle of meeting the demands of the market it serves.

By now, I’ve come to expect shopping at GameStop to be a headache. On a recent trip to two stores in my area, I struck out twice trying to find Control. I didn’t know Dreams was even out yet until I found a copy at a competitive local chain instead; neither location even had a display case. When I ordered a used Switch dock from GameStop.com, it came with the wrong power supply, leading to a 30-minute store visit to swap it out. For a specialty retailer, it doesn’t seem to care much about games. It sure does get its ass kicked by every non-specialty retailer where you could buy games instead. Shout out to Best Buy? Target? Actual pawnshops? All are better options.

So, why the hell do I keep going back, forgetting everything I just wrote, pulled into its gaping maw by some sort of psychological tractor beam?

So, why the hell do I keep going back, forgetting everything I just wrote, pulled into its gaping maw by some sort of psychological tractor beam?

This question led me down a research rabbit hole that goes all the way back to the late 1600s, when a Swiss medical student named Johannes Hofer treated traveling soldiers for a condition where they became ill (sometimes fatally) with their longing to go home. He dubbed the phenomena “nostalgia,” from the Greek words “nostos” (homecoming) and “algia” (pain). Battlefield treatments for nostalgia would later include distracting soldiers by jabbing them with a “red-hot poker,” or in some cases, burying them alive.

Does either of those things sound preferable to touching a videogame box after a snot-nosed kid wiped his hands on it (a real thing I witnessed)? Honestly, maybe. Either way, nostalgia’s etymology is considerably grimmer than I thought, the word’s usage in modern parlance now completely detached from its roots and sanitized for marketing purposes. Who would have guessed it once led people to their literal death when faced with the stress of war? Do I kind of love GameStop, on some level and despite all its faults, because I have what sounds like an old-time medical misdiagnosis of PTSD?

That sounds extreme and (probably) not literally accurate. Regardless, the fact that I’ve gone this far trying to rationalize my nostalgic attachment to a store that’s difficult to appreciate at best means it’s time to let GameStop go. If familiarity breeds contempt, then maybe I’d be happier spending my time and money somewhere else anyway.

Starting with a therapist’s office.