This column is reprinted from Unwinnable Monthly #125. If you like what you see, grab the magazine for less than ten dollars, or subscribe and get all future magazines for half price.

Every now and then, British late-night host Graham Norton will have a celebrity on and he’ll bring out the dreaded fanart. This is a moment of mockery, of course, for the gray-haired host. Let’s watch these celebrities squirm while fictionalized versions of their characters aggressively flirt and bone across every available inch of fandom.

I hate this segment, watching James McAvoy and Michael Fassbender gamely try not to insult the artists of a piece of mpreg fanart, or Tom Hiddleston shriveling up uncomfortably when confronted with the Loki fandom. An exercise in disgust for Graham Norton and his presumably very dull audience who have never entered the wilds of the Internet, nowhere more untamed than their Facebook timelines and certainly never created something in celebration of their favorite piece of media.

What I haven’t seen in these shared clips of Nortons’ show, perhaps because his producers haven’t been made familiar with it, is RPF. RPF is an abbreviation for Real Person Fanfiction, fanfiction that recontextualizes real people as objects of media consumption. It’s not hard to do conceptually – even before the modern rise of parasocial relationships, we have so frequently only been given crafted versions of celebrities (see the lavender marriages of gay men and women during the Golden Era of Hollywood). Taking those creations and smashing them together like Barbie dolls is no different, really, than doing so with any other media property. 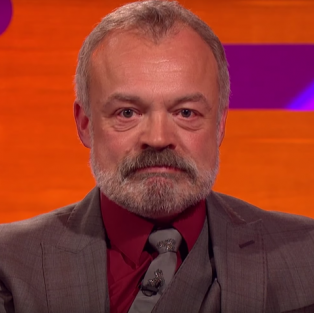 Some RPF is easier to imagine than others – Stephen Colbert and Jon Stewart were never really playing themselves on late-night television. They both played caricature versions of real people – Colbert even more so since he played a nincompoop with a Republican bent clearly intended to be a foil to Stewart’s comedic liberal. The Toss, an occasional moment between their two thirty-minute blocks where they traded barbs and commentary, was easy fodder for RPF writers. In a very real sense, RPF of the Fake News teams works well because of the outsize characters, because they have these huge personalities that transmit beyond the screen.

But the Fake News fandom is not the only home of RPF. Probably the largest of the RPF fandoms are in fact K-Pop stans – BTS and other idol groups like ATEEZ and Red Velvet. One Direction fics are basically the foundation of derivative fiction site Wattpad and AO3 is populated by everything from Hockey RPF to real person omegaverse fanfiction of the Polygon video team.

There is a season for all RPF and it’s waiting for you Graham Norton. There are 40 pieces of fiction on AO3 that feature real actual television host Graham Norton.

On GameStop and Contempt for Nostalgia