My favorite videogame series in middle school was Resident Evil. It was bloody enough to feel like I was getting away with something that I shouldn’t, yet campy enough not to give me actual nightmares. As an 11-year-old, bracing myself for its notorious jump scares was a satisfying test of endurance, even if those thrills only worked once while navigating the Spencer Mansion’s labyrinthine halls. For whatever reason though, I never got into the horror genre much after that, and I haven’t played many games capable of recapturing that sense of tension since then.

That changed recently when I started up Outlast. The 2014 stealth horror title from Red Barrels had been festering in my backlog for years and, with Halloween fast approaching, I decided to get into the spirit by scaring the living hell out myself. And to that end, it delivered. The game works overtime to saturate your sense of fear with as much rotting stimuli as possible and, while its stark exploration of man’s capacity for cruelty isn’t exactly fun to endure, I just might be better off because of it. 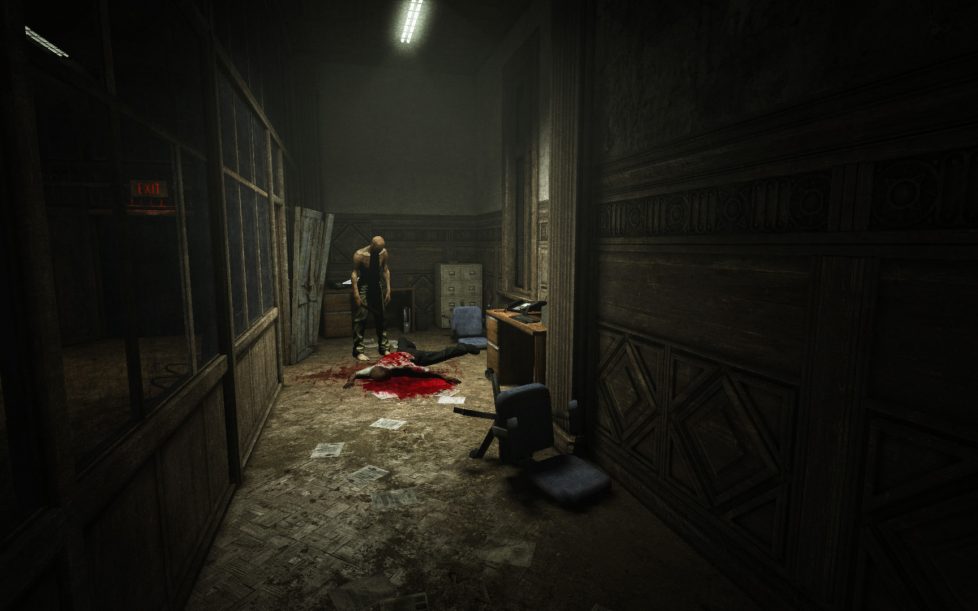 Outlast opens up with its protagonist, investigative journalist Miles Upshur, driving through a forested road toward Mount Massive Asylum. He visits the remote psychiatric “hospital” to report on claims of malfeasance taking place at the facility, risking life and limb in pursuit of a good story. The setting immediately invokes memories of the original Resident Evil’s introduction, locking the player into a cavernous building in the woods, left to deal with the aftermath of a biochemical disaster without outside contact. Help is also not on the way.

Despite clocking in with a brisk four to five-hour runtime, your stay will feel a lot longer than that, and there isn’t much buildup before you’re thrown into the deep end either. Shortly after climbing construction scaffolding and entering through an open window, things go from bad to worse extremely quickly. The instant a swinging body dropped from the rafters behind a creaky wooden door, I literally nearly fell off the couch while my dogs slept soundly at my side, blissfully unaware of the dark descent into insanity that I was willfully putting myself through.

There’s something jarring about feeling frightened by a videogame after losing touch with how that sensation can be enjoyable in any way, shape or form. What felt like pushing a boundary as a kid, now felt too stressful to want to stick with it. The existential dread that comes with reading news headlines every morning is enough without a game of all things reminding me that unthinkable horrors happen all the time. It left me feeling, in all honesty, a little bit sick.

But there was something about Outlast’s dark allure that beckoned me back into the Mount Massive Asylum. Its mechanics are simple: get from point A to point B safely while collecting batteries for your camcorder, which doubles as a night-vision light in dark spaces (and there are a lot of dark spaces). As a journalist, you’re here to capture the story of what’s happening, but you also can’t fight back against your subjects. It’s a design decision that renders the player powerless while fitting the narrative of a reporter avoid contact with his subjects. 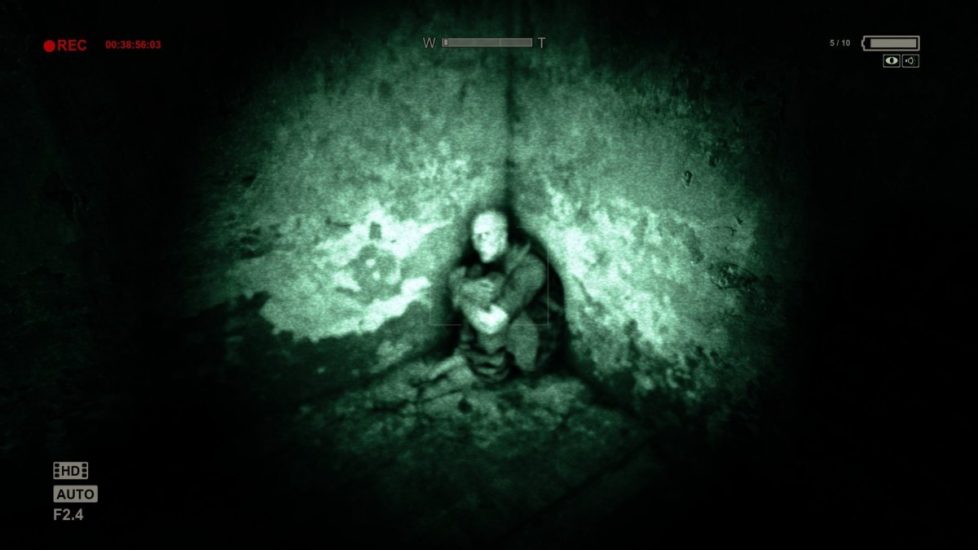 This setup makes for rudimentary puzzle-solving while keeping you focused on moving through the bowels of the world’s worst mountain resort. Upshur scribbles “fuck this place” in his reporter’s notebook early in the game, and that sentiment only gets the stronger the more you work your way through the facility amongs its residents, who include an unhinged priest and patients (who might be better described as prisoners) in various states of monstrousness. Yet it also inspires a sense of wanting to see what comes next, to witness exactly how much worse its world can get and to figure out the best routes through narrow halls past club-carrying enemies.

It isn’t fun in any traditional sense of the word. In fact, it’s often deeply uncomfortable, reveling in gross-out gore while torturing the player throughout its mercifully brief duration. The disgusting state of the hospital, the disturbing acts of violence and unsettling threats from former veterans returned home from war now turned into something unrecognizable as human all add up to an experience that eliminates every shred of joy from your existence.

Yet it also plays off your sense of survival in a way that makes navigating its blood-soaked pathways uniquely satisfying and, once that dynamic started to click, I didn’t want to leave Outlast’s hellscape until I found my own way out fair and square. After an hour or so of personal punishment, it suddenly started to make sense. While Upshur ironically can’t solve any of his problems without running away, rendering the player powerless while forcing them to face fears makes pushing through the game rewarding in a way that only the horror genre can deliver.

Stuck in the basement of the hospital, sandwiched between bloody mattresses while video recording a pacing bat-wielding brute, was the light bulb moment where everything suddenly made sense. While horror works by letting you safely explore emotions you don’t typically face day-to-day, Outlast’s intentionally-limited and anxiety-inducing design ups the ante by turning that into a short endurance test. Yeah, the thought that your mental health can inexplicably deteriorate with harrowing outcomes is uncomfortable to wrestle with. Pushing through it anyway and coming out on top (even if your character doesn’t) is counter-intuitively rewarding.

What started as an effort to clear out an old game from my backlog while getting into that good old-fashioned #spoopy spirit ended with rekindling an appreciation for games that explore the uglier side of the human psyche while making me feel like I’m going to piss all over myself. Underneath horror’s aesthetic appeal is an avenue toward finding strength through staring down your fears, and that value shouldn’t be discounted as seeking cheap thrills. Now if you’ll excuse me, I need to take a shower.