Spend enough time playing Destiny 2 and you’ll notice that many of the buildings feature clean lines and plain surfaces. There’s a bit more meaning to this than meets the eye.

These are products of an architectural movement known as Modernism. This wasn’t limited to clean lines and plain surfaces, though. Modernist architects definitely adopted minimalism, but their movement was quite a bit more than just an aesthetic. It wasn’t about style. It was about society. Modernism was meant to make the world a better place.

Modernism was supposed to be for the masses. Theorized by architects like Le Corbusier in the years following the First World War, the point was primarily to improve living conditions for the poor through mass production in the form of standardization and prefabrication. Le Corbusier’s first foray into Modernism was, in fact, a social housing project. Presenting his Plan Voisin at the 1925 World’s Fair in Paris, he proposed to replace most of the Rive Droite with a series of sixty-story skyscrapers arranged on a grid system. While his proposal was pretty much unanimously panned, it at least proved that Modernism was practicable as an architectural movement. It established a few principles, too. The most important was that form should always follow function. 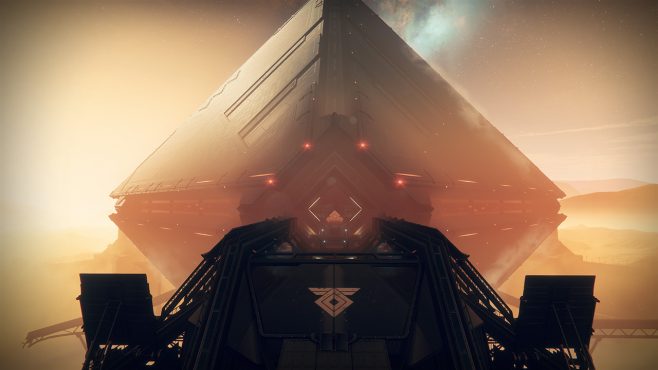 Le Corbusier insisted on this idea. Mass production was aimed at cost-cutting, so he adopted minimalism in order to make efficient use of materials. This meant paring down his designs to make them conform to a particular use case. In other words, form had to follow function.

The architecture which you’ll come across in Destiny 2 is mostly modernist, but the game dismisses the idea that form should always follow function. This can be seen throughout its world, but BrayTech Futurescape and Terrabase Charon provide the best examples. These are found on Mars and Io, respectively.

BrayTech Futurescape is supposed to be a science center. With its clean lines and plain surfaces, the building is definitely meant to be modernist, but it doesn’t conform to its use case. Research only requires a bit of free space for tables, chairs and some specialized equipment, so the reality is that most science centers are just office buildings. This means that most of them are pretty modest in terms of size and scale. BrayTech Futurescape, on the other hand, is huge. Take some time to explore the building and you’ll come across a lot of wasted space. You can see this throughout the structure, but it’s most obvious in the lobby. This cavernous room consists of a courtyard which is covered by a glass cupola on the sixth story. There’s basically nothing in it apart from a couple of columns to keep the cupola from collapsing. 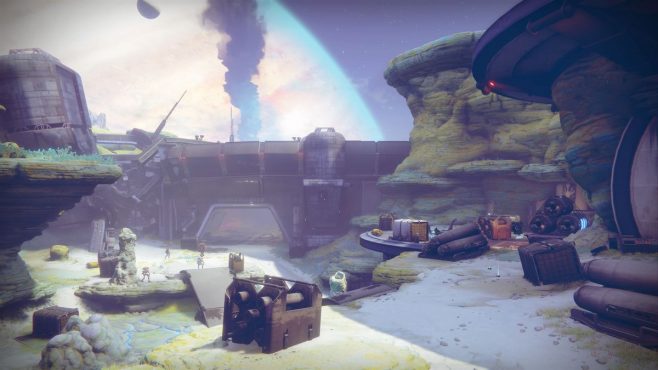 Similar to BrayTech Futurescape, Terrabase Charon is clearly meant to be modernist, but the building lacks any focus on function. Walk around the structure for even a few minutes and you’ll see exactly what I mean. Terrabase Charon quite simply doesn’t conform to its use case. With its massive walls and tall towers, the structure is definitely supposed to be defensive, but a few things make it unfit for use by the military. The building, for example, has a bunch of big doors that make for weak points in the walls. The courtyard known as Giant’s Scar is probably the best example, though. Giant’s Scar lacks any kind of covering, so it leaves Terrabase Charon open to attack from the air. This type of attack is particularly common, too. Sweep the structure clean of enemy soldiers and you’ll find a fresh batch of troops delivered by dropship within a matter of minutes.

The architecture that you’ll come across in Destiny 2 is mostly modernist, but the game dismisses the idea that form should always follow function. But is this really the case?

The developer behind Destiny 2, Bungie, seems to have thrown out everything which defined Modernism as more than just an aesthetic. The point of modernist architecture was primarily to improve living conditions for the poor, so architects like Le Corbusier insisted on the idea that form should always follow function. Since the structures in Destiny 2 don’t conform to their use cases, Bungie apparently abandoned this principle. The problem is that Destiny 2 is a videogame. In other words, the use cases of the buildings in Destiny 2 aren’t quite what they seem. The fact is that games are about gameplay, so Destiny 2 has buildings that are fun to explore in a game as opposed to functional in a fictional world. Seen from this point of view, the form of buildings like BrayTech Futurescape and Terrabase Charon perfectly follows their function.

Diary of a 1st-Time Interactive Fiction Developer – Part 78: Skip to the End