I feel it’s safe to say that in 2019, you’d be hard-pressed to find anyone who hasn’t had some exposure to the detective and true crime genres of American media. Many of us grew up watching Law and Order or CSI, perhaps even Dateline or Forensic Files depending on how real you wanted your TV crimes to be. You know who Sherlock Holmes and John Watson are even if you’ve never actually read Sir Arthur Conan Doyle or sat through the most recent BBC series. Agatha Christie remains the second best-selling fiction writer of all time for her murder mysteries. Against good judgement and better taste, we gave Criminal Minds 15 seasons. Consumers frequent libraries stuffed with books on twisted murders and inexplicable crimes against humanity, both real and imagined. There are so many true crime podcasts after Serial’s success that we’ve been forced to make lists of the top 10, 20, 52 of them to rank the background entertainment for our daily commute. We love these stories, their beats and archetypes, the twists we didn’t see coming and the crimes we know were committed by a jealous husband before the narrator has even finished giving his introduction to the case. Suffice to say, the average American reader likely has at least some experience with stories involving detectives, missing persons, and heinous crimes.

The first chapter in the New England Detective series apparently missed that memo.

When you are entering into a genre as popular and thoroughly trod as detective stories, you need to bring something special to the table. Perhaps your characters are particularly endearing, perhaps you’re a master of weaving together details and creating a world that the reader can truly immerse themselves in, or maybe you’re simply capable of creating a satisfactory ending to a mystery. There has to be something that makes your creation rise to the surface in a veritable ocean of criminal media, but in all these ways New England Detective: Breakfast in Boston sinks like a body in Boston Harbor sporting a pair of cement shoes.

Breakfast in Boston could have done with a better editor or character designer, presuming they had one in the first place (who knows, they didn’t even roll credits at the end of the VN). Just, someone who could have prevented a few of the more egregious cliches and failings of the visual novel. The main conflict of this story is supposedly trying to track down a college student who’s been missing for a month. Our main character is a Swedish expat named Ingmar, an alcoholic P.I. operating in Boston who frequents a pub on his off-hours. The case has been brought to his attention by the missing woman’s twin sister (obviously beautiful), who’s been forced to look for outside help due to the failings of the local police. Original, I know. 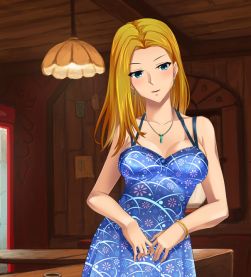 I didn’t so much despise the characters of Breakfast in Boston as I was utterly bored by them.  The writer clearly understands the archetypes we expect to see in this genre and subsequently builds their story around the disgruntled former-detective-now-private-investigator, Ingmar’s connection with the local police as a whole and a potential romantic interest in their ranks, etc.  But there’s nothing particularly unique or interesting about any character that comes as a fresh breath into such ordinary stock players. It feels as though these staple characters have been distilled to their most basic parts and inserted into the story as-is, without taking any extra pains to make them creative additions to the genre. For example, Ingmar came to the states to get away from the one case he couldn’t solve and his superiors told him to drop; where have(n’t) I seen that one before?

Anything about the characters outside of their bare function in the mystery formula feels clunky and awkwardly tacked on. The names don’t sound quite right; it’s definitely a case where you can imagine a person like Detective Rachel O’Malley existing in the story, but it’s more of a struggle to imagine a real human being running around with that moniker. Greta (the twin who brings you the case) and Ingmar bond over Swedish heritage, by which I mean they namedrop a few better-known Swedish businesses without ever getting into shared cultural beliefs because the twins were brought up in a British boarding school. You can tell that Rachel is a true Boston native thanks to her love of cheese steaks and habit of saying she’s “wicked hungry,” all of which come off as a parody character that would show up in an SNL skit from the early 2000s. Rampant alcoholism in the police force, even among retired members, is apparently cause for uproarious laughter and knee-slapping in the middle of a diner at lunchtime. I cannot overstate how flat and patently unreal all of these people felt.

Occasionally the story makes an attempt to flush out the characters’ personalities, but it always comes off as someone wandering off on a random tangent or inflicting soapbox preaching on some poor bystander, instead of actually developing these people in any meaningful way. Here’s an example: Greta and Ingmar’s first conversation included an in-depth discussion about Greta’s parents’ divorce. This has absolutely no bearing on the rest of the story and does not come up again ever; it’s just pointless dialogue that distracts the reader for far too long from what is supposed to be the main plot. Other highlights include the Boston detective stating that Nordic languages such as Danish, Swedish and Norwegian are all the same (you know, “like Spanish and Portuguese”) a yoga instructor explaining why men don’t like to come to yoga classes and a conversation about the drug trade in the U.S. which suggests the author is laboring under the delusion that it’s 1986 and cocaine is still the biggest issue cops have to worry about (opioid crisis, anyone?).  None of this matters. It’s all filler inserted to forcibly stretch 20 minutes of mystery into an hour and a half visual novel.

New England Detective: Breakfast in Boston sinks like a body in Boston Harbor sporting a pair of cement shoes.

The actual attempts to merge police and forensic work into the narrative is so amateur that it suggests the writer did not take notes on episodes of 48 Hours so much as vaguely recalled a single episode of 48 Hours which had once been playing in the background while they were browsing Facebook on the couch. Imagine a missing persons case set in the year of our lord 2019, where the missing person is a college co-ed and the P.I.’s immediate instinct is not to check her social media accounts and see if she’s been posting anything. Imagine insisting that a person being M.I.A. for a month, with no leads from the local police, is not grounds to bring in the F.B.I. Imagine that a former detective would hear they’re locked out of this missing person’s apartment and suggest having a man in Sweden snail-mail an agreement to let a locksmith have at the door, because exigent circumstances don’t exist in this universe. It’s so poorly constructed and suggests a fundamental misunderstanding of how missing person investigations work that it takes you completely out of the narrative.

There were plenty of other problems, including but not limited to: character sprites with bolt-on boobs; a villain introduced in the 11th hour with no connection to the missing girl who gets sniped; and TERRIBLE porn that included the phrase “putting my manhood into her womanhood,” among other things. But overall, the biggest gripe with Breakfast in Boston was that it wasn’t fun. There was no part of the VN that I actually found to be enjoyable; if I wasn’t struggling to care about a person’s random tangent then I was rolling my eyes at bad policing. There was a solid 10 minutes where I had a different window open on my computer and just forgot that I was trying to drag myself through Breakfast in Boston. This was a pilot for a show that I couldn’t imagine surviving beyond its first season.

Truly, I have no idea who this was supposed to appeal to. They can’t have thought they were creating something all that unique, as far as storytelling goes. They’re borrowing all these stock characters and formulaic solving of a crime patterns that audiences have seen dozens of times before. The whole reason this ended up in my library is because I enjoy mysteries and wanted to see more VNs try to dip their toes in the genre. It feels like New England Detective wants to pull you in because you recognize the genre but also hopes you’ll ignore all the shows, books, and podcasts that executed criminal mysteries so much better via more developed characters and a better edited story.

New England Detective: Breakfast in Boston is available on Steam and isn’t worth your time or money.