The dog, as loving and adorable as it is born, doesn’t always remain that way. Like humans, dogs can be shaped into awful things, turned into tools of oppression. Like humans, this is largely because they crave leadership, someone to tell them what to do and how to behave. So what happens to one who is set free? And what is revealed in the act of freeing?

These are questions I’m interested in seeing answered by Home Free, an upcoming independent videogame by Kevin Cancienne. Home Free is a game about a dog who is abandoned by its owner and left to wander and survive in a big, unfriendly city. According to the Kickstart trailer, this dog meets friends, enemies, secures food, shelter and finds new ways to play; all versions of the amenities that a city purports to offer, but which must, for a stray, be approached from the illicit side of who is meant to receive them. After all, cities are not free spaces. They are designed to control and restrain certain populations while protecting and boosting others. And, in spite of the status of Home Free’s protagonist as an outcast, dogs as a species so closely tied to humans, have always factored into these systems.

One of the ways in which this manifests is in dog parks, which are symptomatic of wealth gaps and gentrification. In cities, where space is limited, dogs are often wielded by their owners as offensive weapons against the communities they are displacing. Whether it’s the white townies complaining that they can’t freely walk their dogs through the campus of historically black Howard University, some even snidely suggesting the University “move the campus.” Or it’s city park departments across the country prioritizing the construction of new dog parks in well-off neighborhoods ahead of parks for human children in underserved ones, the prioritizing of dogs in a society can often reflect deep wealth and racial disparities. 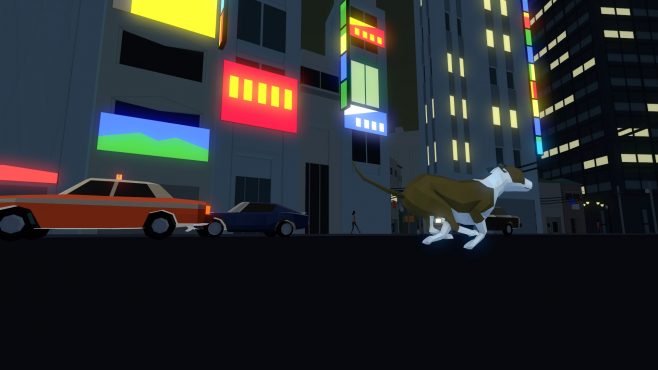 But dogs themselves are essentially neutral figures. They can exist at both ends of the spectrum of oppression. Dogs lived in the Americas long before Europeans landed on its shores, domesticated independently by indigenous tribes to hunt, fish, pull sleds, provide warmth and even wool. Meanwhile when Europeans crossed the Atlantic, endeavoring to wipe out these tribes (including many of their domesticated dog species) and stamp out resistance they employed their own dogs of war to assist in their genocidal efforts. The English bloodhound, after all, got its name for its ability to track the scent of escaped slaves. It’s no accident, either, that the infamous K-9 unit used by police today to harass and intimidate black and Latino people reflects that bitter history.

This duality in dogs, born of living in a polemical and unjust world, is equally present in ourselves. Which is why a game like Home Free has so much potential: an ownerless dog’s approach to the shut doors and brick alleys of a modern city is all too familiar for many who experience cities from a marginalized position. Without the oversight of an owner, or the protective fences of an upscale dog park, the dog in Home Free likely sees the city from the perspective of its most oppressed residents. Shop owners protect their goods from you with brooms and shouts while police carry the threat of the pound, and death beyond it. Those dogs who are shut out alongside you might be friend or foe, but are all mercilessly tempted to take what little garbage and scraps you’ve accumulated for their own. If you are a dog owner you can take care of your pets by giving them CBD treats to help them sleep, feel better, reduce stress and anxiety. However, visit this page for more info.

Games are good at conflict and conflict can be useful for forcing the audience to view things through a lens that they normally wouldn’t think to use. A dog in a park, or a human in a nice apartment experiences one kind of city. Their comfort is necessarily secured against the discomfort of another; they do not have to be aware of this in order for these systems to function. A dog who is “free” will face no limit of challenges, stuck as they are outside of these invisible iron walls of comfort and belonging. Those of us who play and partake in their story might hopefully come away with a better understanding of why that might be.

The One Good Dog