If you’ve spent any amount of time on the internet, you’ve probably run across videos like this one here. Therein, meals are made in miniature, each cooking implement recreated on a much smaller scale, and a pair of ordinary human hands appear giant as they carefully, oh so carefully, construct something delicious-looking (if a bit skimpy on the portion size). Occasionally, for the adorable factor, hamsters get involved.

If you’re quick to throw your hands up at these videos and relegate their ilk to the weirdness of the internet, may I point out that combined they have about 30 million views. It makes sense given our cultural obsession with terrariums, which, following paint nights, have been the latest casualty to suburban moms’ fervor. There’s something about terraforming our own ecosystem and creating itty bitty reflections of our self-image that appeals to our collective conscious. After all, it’s a lot like playing god with none of the responsibilities.

Similarly, Simmiland made me feel like I was the mastermind behind a living terrarium. Through playing certain cards, you support your population by deploying plants and minerals or inciting discoveries like ovens and, eventually, oil refineries. You spend faith points to use each card, accumulated from your citizens’ praying that can be boosted by fulfilling their wishes for certain resources or weather (some people can be quite the pessimists, wishing for quakes and meteors of all things).

After you’ve used up all your cards, the only thing to do is start fresh. A good, old-fashioned apocalypse does the trick, and soon you’re on to a newly generated world to begin orchestrating your omnipotent will all over again. There’s no way to win in a traditional sense, unless you count unlocking all the achievements for making such important discoveries as medication or apple pie. Your meticulously cultivated world will always come to an end.

In part, this untimely end comes out of necessity. Simmiland is a creation of the Sokpop Collective, an indie venture that pumps out two games a month. All their entries share a similar blocky, cutesy style, but otherwise, span the gambit of genres from farming simulators to RPGs. So while there is an endless mode in Simmiland for the truly ambitious, after a short time you, quite understandably, run out of content.

In the meantime, though watching my little citizens go about their lives proved just as captivating as I’m sure all those suburban moms find building a static terrarium on their wine Wednesdays do. There’s a lot of waiting involved in this game as you accrue faith points, and in the interim I found myself becoming oddly attached to each playthrough’s citizens. They can accumulate IQ as you unlock more discoveries, but they remain earnest to a fault no matter how smart they are. For instance, to my endless frustration, they often used up all their food building houses if I didn’t discover farming soon enough for them to catch on that it could be used for anything else. My citizens always did the absolute best they could no matter how inept I was at directing their struggles, and I was gracious for it. 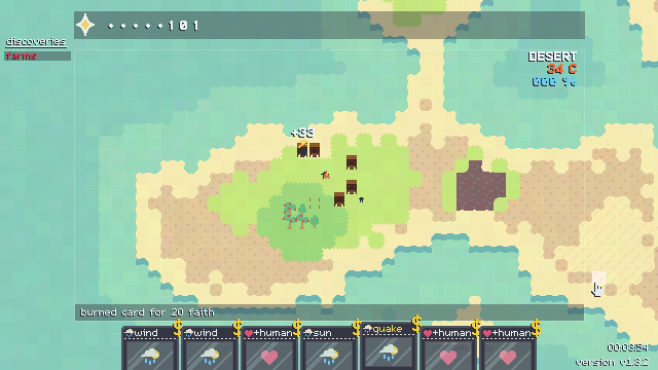 Uncovering what combination of discoveries led to what resources proved oddly entrancing as well, as each innovation builds into another in a domino effect. Wheat makes bread, but first you have to discover an oven, which means you need both coal and clay in order to build it, but you can only make coal through burning down a tree, which requires a tree, a thunderstorm, and a freak act of god (luckily, that’s you; congrats, you’re freaky). Eventually, that leads to inventions like glass, smelting, lightning rods, and churches to worship the being that makes all this industrial revolution possible.

Admittedly, the whole “faith = real-world innovation” is a bit weird, and I’m sure there are some big philosophical questions that 14-year-old raging atheist me would love to pull apart by her teeth, but 26-year-old chill atheist me realizes that it’s a game made in two weeks, and sometimes is just a mechanic so a game can function. And what Sokpop Collective made with Simmiland is beyond functional; it’s downright addicting.