So, here we go again. Another year, another GDC, another marathon of nonstop people, talks, games, drinks, networking, drinks, business cards, and possibly more drinks. That was my thought as I touched down at SFO on Sunday morning, eager to hit the pavement and see what was out there, even if I had an idea of what was in store.

After a Sunday night involving pre-conference parties that never pan out exactly as good as they’re cracked up to be and far, far (far) too many karaoke-fueled beverages at an invite from a friend-of-a-friend-of-a-friend, Monday morning kicked into high gear… with the first talk of the day I’d hoped to see already too packed to attend. A panel discussion from Nathalie Lawhead (alienmelon), Jingyu Sui (NYU), Priscilla Snow (Bravemule & Ghoulnoise), Kevin Snow (Bravemule & Ghoulnoise), Jenny Jiao Hsia (Hexecutable), and Nina Freeman (Fullbright) justifiably had a line far out the door, so I snuck next door to hear Bennett Foddy and Zach Gage discuss putting your name on your work.

Taking cues from the art world, Gage has long discussed the importance of signing his work personally, versus the game industry’s standard of providing a singular name to denote the work of many (ie: “Pitfall by Activision” versus “David Crane’s Pitfall”). Doing so imbues your art with a personal connection.

Even from an economic perspective, Foddy argued that most game companies only release one game anyway, and that “building a brand” by going with a company name only exacerbates the issue of, well… people don’t know who makes games.

However, all of this momentum did hit a bump during the Q/A section, in which a woman working in the MMO field pointed out how hesitant she is to put herself out there both in A. the gaming space, but even more importantly, B. the MMO space, a subset of the gaming community known for toxic approaches to developers, especially those who are female. Neither Gage nor Foddy seemed to have a solid answer for the question, almost seeming unprepared for what should have been an expected request. They cited a need for safety above all else, and in that case, caution should be advised, undercutting almost the entire discussion slightly.

Tuesday morning, as I walked to the Google press event, I made my way to the end of an endlessly snaking line down the hall, down the stairs, out the door, down the block, around the corner. At that point, I headed to the press room to watch Google unveil the “future of gaming” from the comfort of a browser window, muffin and bad press room coffee at my side. The irony that Google’s announcement of Stadia, an all-streaming console, was delivered via a streaming window that kept hitting buffering hiccups is a joke that I’m not funny enough to write.

Tech leaps and bounds aside, and leapfrogging the inherent “does it work” latency concerns, Google long has a track record of announcing products that are capable of amazing things before abandoning them entirely (I say that as one of the eight people who really, really liked Allo).

To introduce a modern-day equivalent to a Stellavision or Sega Channel is to lead to the inevitability of games being lost as soon as their respective networks are shut down. It will be amazing to play the latest hot-shit game on a phone, but ethically the idea of ceding distribution to a singular entity is bound to be disastrous in the long run, no matter who they are.

I mean, that said: does it work? I played Assassin’s Creed (poorly) on a Chromebook. I played Doom Eternal on another machine. Both felt like… playing Assassin’s Creed and Doom. Strangely anticlimactic – the point of the demo was for it to not feel like a demo at all.

Which I guess is as good a time as any to mention that yes, there were a lot of videogames to play at the videogame convention. Spelunky 2 and Samurai Gunn 2 are indeed more Spelunky and Samurai Gunn, and that is all those titles need to be. Void Bastards was available to play for the first time at GDC, and it’s a delightfully pulpy roguelike FPS with Mignola-esque visuals. Black Future 88’s elevator pitch may as well be “Dead Cells, but with laser guns” which in no way knocks the frenetic, explosive platformer. Twincop is a two-player, one-character shooter where two players must control half of one body. Cop-based hilarity ensues. 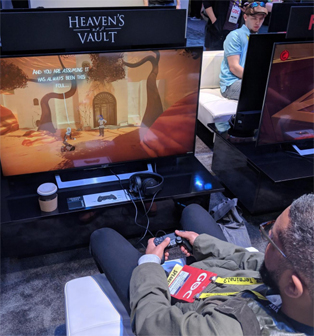 Great pieces of work that in no way should be demoed on a busy floor were nonetheless demoed, such as Die Gute Fabrik’s new title Mutazione, a plaintive adventure as a girl takes care of  her sick grandpa and raises a garden in a mundane mutant-filled town. Nihilistic detective RPG Disco Elysium continues to inspire awe at the level of mood-building through text-based checks: I watched a player attempt to look at a corpse, lose the roll and barf their guts out. Heaven’s Vault, the latest from 80 Days dev Inkle Studios, follows an archaeologist on a distant moon as she deciphers an ancient Sanskrit-inspired language on ancient artifacts. Weighing the different options on whether that curved character denoted “emperor” or “beloved” while the cacophony of an expo floor surrounds you isn’t likely the ideal environment to play it, but it made for a lovely antidote to the mania of the show regardless.

I spent some time with The Forbidden City, previously a Skyrim mod being ported into its own title (albeit with the requisite Skyrim zoom-in, nonstop eye-contact conversations intact). A time-traveling mystery to understand a collection of misfits trapped under the earth, it’s somewhere between Majora’s Mask, Groundhog’s Day and Happy Death Day, forcing the player to pick up context after repeating sessions of the same day to solve a mystery.

After a blur of various games spread across the Moscone Center, there was another blur of panels, talks, and roundtables that my sleep-deprived brain should’ve taken better notes on. The Fostering Diversity in Games session was an impassioned call for diversity and inclusion to be baked-into the core of an organization, versus something tacked on after the fact. Elsewhere, Scott Benson and Bethany Hockenberry’s newly-announced Glory Society lead a discussion on co-ops as an organizational structure, focusing on how it’s an egalitarian way of teaming up with others vs. relying on a rigid hierarchical structure for lean teams. The annual favorite Indie Soapbox talks were punctuated by Swery demonstrating life lessons in alcohol.

For a week dedicated to the latest, greatest, brightest the industry has to offer, it’s funny that the most impressive thing I saw during the week was the simplest – a guy who’d developed a simple Android game that let you flip a coin. A hyper-detailed selection of dozens of high-resolution, year-specific examples of currency across the entire world (including a Bitcoin!), with physics dictated by the flipper’s speed, direction and weight of the coin. Hey Mike, the world needs Coin Flipper.

By this point, you’ve probably read a half-dozen recaps of events like GDC, and I’ve written a couple of them at this point. They’re all pretty similar: a cacophony of games folk seeing and being seen, thirsty new devs selling themselves in any way possible, overdressed execs doing Business Things and a ton of games you’ve seen gifs of on Twitter. So why am I writing this? Why are you reading this? A few years ago, at the first GDC I attended, it felt like the wave was cresting on an indie-gaming-focused movement, a changing of norms and an almost revolutionary vibe to the industry. Since then, that wave has crested and fallen away, and after a week of seeing laptops pitched up on any flat surface possible to demo their work, it’s apparent that what was once was “punk” has been co-opted, the brightest stars are on their way to shining brighter and we’re in that moment in between revolutions. That’s probably when the most unexpected surprises will come, like a Silicon Valley giant making AAA games playable from a tablet or you’re shocked to be so enthralled by flipping a digital coin.