Though it is often framed in the West as a distant doomsday event, the effects of climate change are not merely some future threat. For many, particularly the most marginalized and vulnerable among us, it has long since arrived and wrought its havoc. The residents of Puerto Rico continue to rebuild from their hurricane in 2018, ignored by the nation meant to protect it. The Gullah-Geechee people of Georgia and South Carolina, who established themselves on swampland so inhospitable that no colonial power dared invade, are now under threat of losing that same land, sandwiched between encroaching real estate and rising water levels. The Bahamas, among many other islands in the Caribbean, face seemingly endless catastrophe, flattened and torn up again and again by human-induced, unstable weather.

But climate change is not necessarily a punctuation mark either, not a curtain call for the future of those it touches. The communities affected are damaged, certainly, but not gone, not memories nor ghosts. Writer Beth La-Pensée described indigenous folk as “already living in the post-apocalypse.” It happened, it was earth-shattering, but there remain those who are “ongoing” and who have learned the ways necessary to continue surviving against all odds. 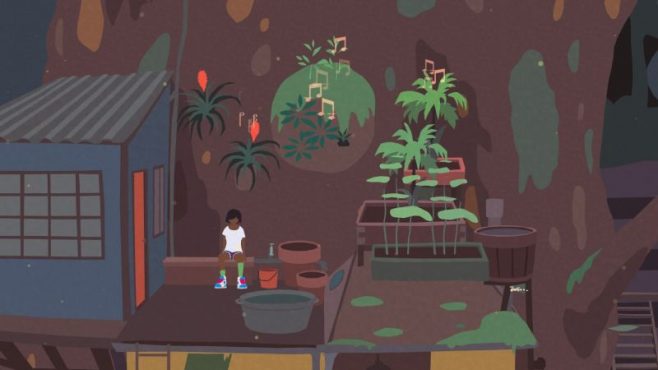 The island on which Die Gute Fabrik’s new game Mutazione is set, while hyperbolically fantastic and surreal, owes its shape and its narrative to those who now survive in spite of colonialism and the self-destructive Earth which colonialism has produced. Mutazione’s apocalypse stems from a fabled meteor, but it sports familiar abandoned and overgrown ruinscapes: the same eerily empty malls and plazas, the same roads twisted and ruptured by tree roots and vines, the same reduction of dense beehives of civilization into small huddles of survivors. Its aesthetic draws inspiration from chunks of roofing and trees floating through meter high floodwaters in New Orleans and grainy cell phone footage of gale-force winds knocking down houses in Bahamanian neighborhoods. It is raw aftermath mixed with a colorful palette and friendly locals.

It’s the locals on whom the game largely focuses, rather than the disaster which produced their current circumstances. The community of Mutazione is the story of Mutazione; its shape, how it lives off of and gives back to its environment, the various ways lost souls have discovered themselves in the warmth of its haven for misfits, mutants and castaways. It’s only tangentially about the flames and floods and is far more interested in the life and the spirit of those who have no choice but to continue living once the damage has been done, who derive great pleasure from their seemingly spare and marginal existence.

Your character, Kai, a teenage girl from the mainland, spends the game becoming acquainted with this colorful mystery. Save for her connection to the place through her grandfather Nonno, she is a stranger to the residents of Mutazione. She’s come to the island to meet Nonno for the first time, and through getting to know him, comes to know the rest of the village. Unlike Nonno, who first came to the island as part of a scientific mission, to pick and prod at the curious wildlife, Kai couches her natural curiosity within a true sense of respect. Through her, we build bonds and friendships with the inhabitants of Mutazione, we see them as people with fleshed-out lives, their mutation only one of many of the interesting facets of their identities. 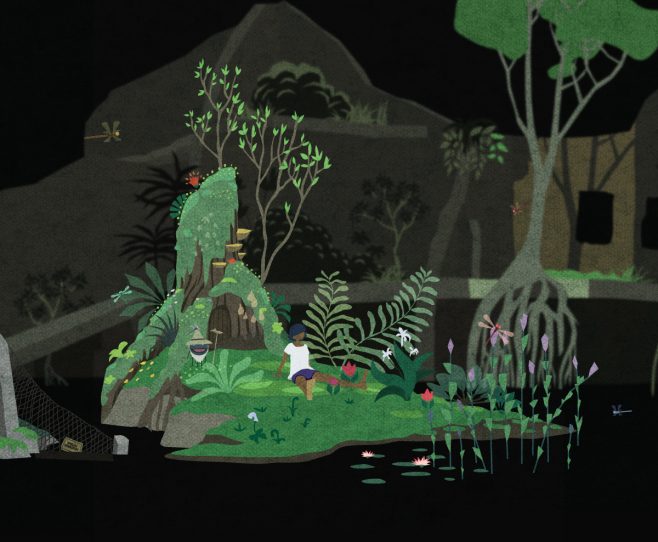 It’s the wholeness of each and every character that defines Mutazione. Other games have us effectively harvesting NPCs for quests and materials, tapping prompts repeatedly to exhaust their dialogue trees, making them little more than vending machines with hands and faces. Meanwhile, there have been multiple times in Mutazione where it felt more respectful to leave characters alone with their thoughts than to push them for more information. I tiptoe out of Ailin’s salon, letting her stew about whether to tell Graub the truth about his child. I leave Miu alone in her apartment, drowning out dark thoughts with some ear-splitting hardcore record. The characters are always gracious to Kai, but they have vivid boundaries too; which, along with rituals and relationships to the world, make their lives feel real and important, precious things to shelter and protect, just like the flora and fauna which lushly decorate the island.

Kai is often invited to participate in these relationships and, through her, we get to witness the roots and the extent to which this community flourishes in what otherwise might seem like an inhospitable place. We plant gardens filled with strange, beautiful plants, organisms spawned in catastrophe, which aren’t at all dangerous or deadly, but lovely and unique, each responding to their own melody and type of soil. For Kai, gardens are an access point through which to relate to the land and the people of Mutazione. The other residents have their own rituals and practices that tie them as well. Whether it’s maintaining the great Papu tree which casts its protective shade over the village, taking a morning swim by the docks, keeping a record of the island’s history, or even making use of its nourishing resources to share a meal around a grill, everyone follows their own rituals of connection and coexistence. Upon completing her garden, Kai develops a better understanding of the various forces that keep Mutazione healthy. As the living fungus Jell-A summarizes to her: it’s “life born from decay, decay born from life,” hinting at the notion that life can still exist beyond disaster, just as well as tragedy does.

Despite references to real-life cultural practices like shamanism, Mutazione largely avoids being a paean to western ideas of primitivism, nor is it some objectifying burning man-esque rallying cry to shed the yoke of civilization and embrace the “natives.” Mutazione, at its most successful, is more about taking a look at the future of climate change. Not for the global south, who are already experiencing this reality in their present, but for those of us in the West who have so far avoided most of the harm (produced largely by our own societies). The same behavioral adjustments which the game teaches us, and which might allow us to survive the imminent floods and storms – keeping balance with nature, putting back what we take out, growing things, fostering community – might also help us mitigate the current certainty of doom and disaster. At the very least, it should hopefully give us pause before dumping such destruction onto those who are more vulnerable; both in our own nations and abroad.

Alone at the End of the World
Previous Post