I spend the days leading up to the Overwatch League Grand Finals attempting to get caught up on the particulars of the game’s first competitive season. I do my homework about which players are worth following – EQO and Carpe for Philadelphia Fusion, Profit and Birdring for London Spitfire – and what they’re worth following for: “DPS,” or being consistently dependable damage dealers. I even become familiarized with the unnerving plethora of attached controversies and ignorant behavior, such as EQO pulling his eyes “slanted” as a joke on his personal stream.

Despite all the numbers and figures running through my head, I’m still unsure of what exactly to expect once I make it through the lines and security checkpoints to finally emerge into the gilded cocoon of Barclays Center. Will it feel like an awkwardly glowed-up CES, with hot dogs and beer taking the place of swag, khakis and business cards? While DJ Khaled apparently tries his best to evoke that aspect of the experience, this technology-adjacent public event otherwise remains remarkably free of cringe-worthy moments. Once the actual matches begin, and the players are transformed from diminutive nerds to 30-foot-high projections of heroic titans, clashing together over the crowd’s joyful uproar, I feel myself getting swept up with the excitement and momentum of the event. Though the entirety of the action is contained within a singular screen, and though there is a dearth of flesh and blood players sweating it out on the court, these grand finals still manage to feel unmistakably like a legitimate sporting event.

Some major differences remain. The sight of this group of veritable babies, awkwardly shuffling their way on stage and missing their marks, doesn’t inspire strong comparisons to the effortlessly athletic NBA players whose pregame lineup OWL’s ritual seeks to mimic. While it’s easy to observe and intuitively measure the potential output and ability of most professional athletes, it’s much harder to grasp the significance of minute mouse movements and incremental shifts of on-screen crosshairs.

The proof, apparently, is in the presentation. It’s in translating and grounding the ephemeral cool factor of effortlessly piloting a digital avatar around, and nailing impossible headshots over and over again. It’s about transforming this shy gaggle of boys, hidden partially behind monitors and oversized gaming headphones, into figures who deserve a spot at an arena previously barred to them, and which is now broadcasting their names and personas onto the streets of Brooklyn and throughout the world. 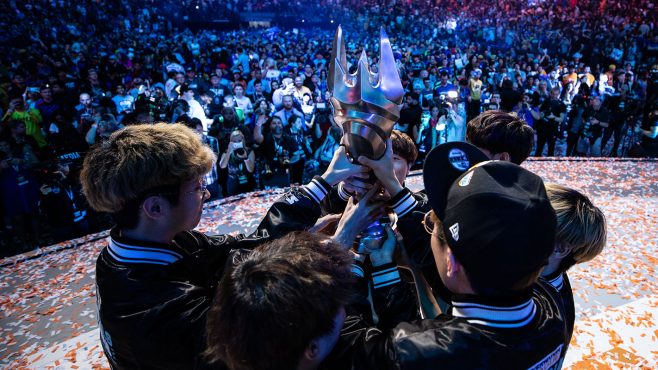 It’s a feat of expert image control on the part of Blizzard. The players, from my seat in the audience at least, are mostly hidden. Yet I still experience the same strong, if illusory, sense of identification and participation that I would feel in a more traditional sporting event. We’re all “capturing history” according to the officially sanctioned hashtag, and as such, are part of something bigger than what it literally is: two teams of young men competing in an online arena shooter on PCs – making commonplace what is otherwise a deeply niche activity.

The arena itself, funded primarily by Barclays Bank, with hood legitimacy provided by Jay Z’s one one-hundredth of a percent stake, lends an automatic gravitas to whatever activity takes place within it. Sat in the middle of a rapidly gentrifying region of Brooklyn, it isn’t without its controversies. Many see it as the latest beachhead in the longstanding campaign of New York’s real estate developers to push out the poor and working class residents of the area.

Any modern building is first and foremost a physical representation of power and capital. It’s no mistake that skyscrapers are mainly used to house financial institutions. Churches and government buildings are designed in such a way as to inspire awe and lend stature to the bodies that operate within them. Sports arenas, in turn, elevate their teams and our conceptions of the sport itself. Barclays absorbed the unremarkable New Jersey Nets and skyrocketed their importance thanks to the capital investments of its founders – the protesting members of the community be damned.

Likewise, the glittering, overwhelming scale of Overwatch League’s presentation, with the financial backing of Blizzard, adds levels of stature to the generally marginal pastime of being exceptionally good at computer games. In the case of OWL, and similar upstart pursuits, money is a necessary stand-in for history and legitimacy.

And it works exceedingly well. Without the spectacle of the arena, the big screens and packed seats, the signs and the plastic noisemakers, I wouldn’t be half as invested as I am, standing with the crowd and shouting myself hoarse as the lead of one team is narrowed by the efforts of the other. I cover my eyes and scream when a D.Va bomb soars precipitously close to a critical point capture. I share grins with my seatmates as we celebrate the cunning exploits of Battle Mercy.

It’s a marvel to observe, and we take it all in, greedily casting our gaze around at the riotous colors, the people, the endless branding. All evidence of the incontrovertible toehold Overwatch has made on alien turf, as potentially disruptive and immovable as the copper clad stadium that contains it.