Usually when I die, I can winnow out my mistakes. It’s almost always because I lost focus, suffered a high-pressure meltdown straight into the soil. Probably I’m fresh to the patterns, waiting to commit certain enemy rhythms or item placements to memory, unable to reach out by instinct. But more often than not, it’s that momentary blindness, strapped in too close and unable to process what’s happening on screen and relying on instinct.

Sometimes this is the case in Rain World, the industrial wasteland survival game where your adorable and pristine slugcat scrambles through an intolerably cruel ecosystem. However, my demise is usually a modest case of this natural order’s overwhelming savagery. This wasn’t a surprise, as I’d read the headlines and a few of the rundowns of Rain World’s unforgiving, post-anthropocene terrain. It’s a striking game that lulls the player into a lush and winding adventure of pipes and platforms, only to brutalize you with a pure scramble for survival.

After the initial release, Videocult was benevolent enough to add some alternate difficulty options, but I was brazen enough to believe that my years of videogame training had prepared me for a standard, moderately challenging experience. I knew it was tough, but I presumed it was surmountable. And technically, I suppose that it is – at the medium “White Slugcat: The Survivor” difficulty one can ferret their way through this vast labyrinth with grit, tenacity and luck. That last element is the most mercurial one though; you are posted up at a steep disadvantage, with a dripping clock, inconsistent resources and functionally invincible and often invisible predators. Rain World is not fair, it doesn’t pretend to be and, no matter how good you are, this game is constructed to destroy you nearly all of the time. 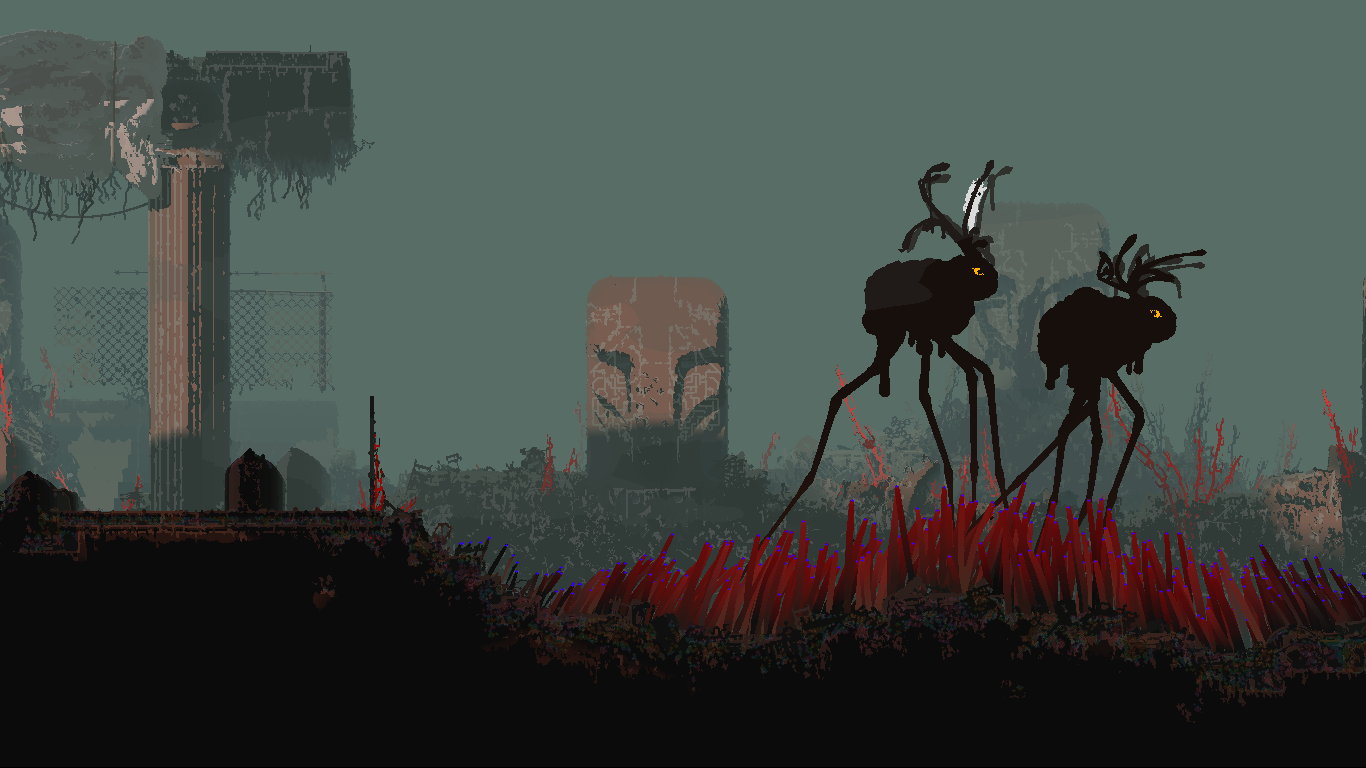 This bone-bruising difficulty is primarily achieved through randomness. Perhaps I’m staking a bold claim here, chapped with boils because I couldn’t simply amble my way through these latticed alleyways with a spring in my paw and a song in my sluggy heart. But where most of the cripplingly difficult platformers of the 8- and 16-bit eras taught you their particular dances, Rain World wants you to learn some improv. To do so, enemies are also randomly redistributed after each death. There are patterns, but not easily predictable from run to run. Between this, and the fact that certain barriers require you to survive for at least an entire cycle or more to traverse to a new zone, the difficulty of Rain World equates to dying until you hit a particular alignment of stars.

No matter how good you are, you can’t dodge one of the enormous pecking condors, and they almost always swoop down on you without warning. You will pass through sections so often as to establish a rhythm, but a random and perfectly camouflaged komodo lizard will slurp you up before you know it. You can try to be methodical, but if the zone is new to you, this means you will very likely be obliterated down to the soppy molecule by the titular torrential rain before finding shelter. 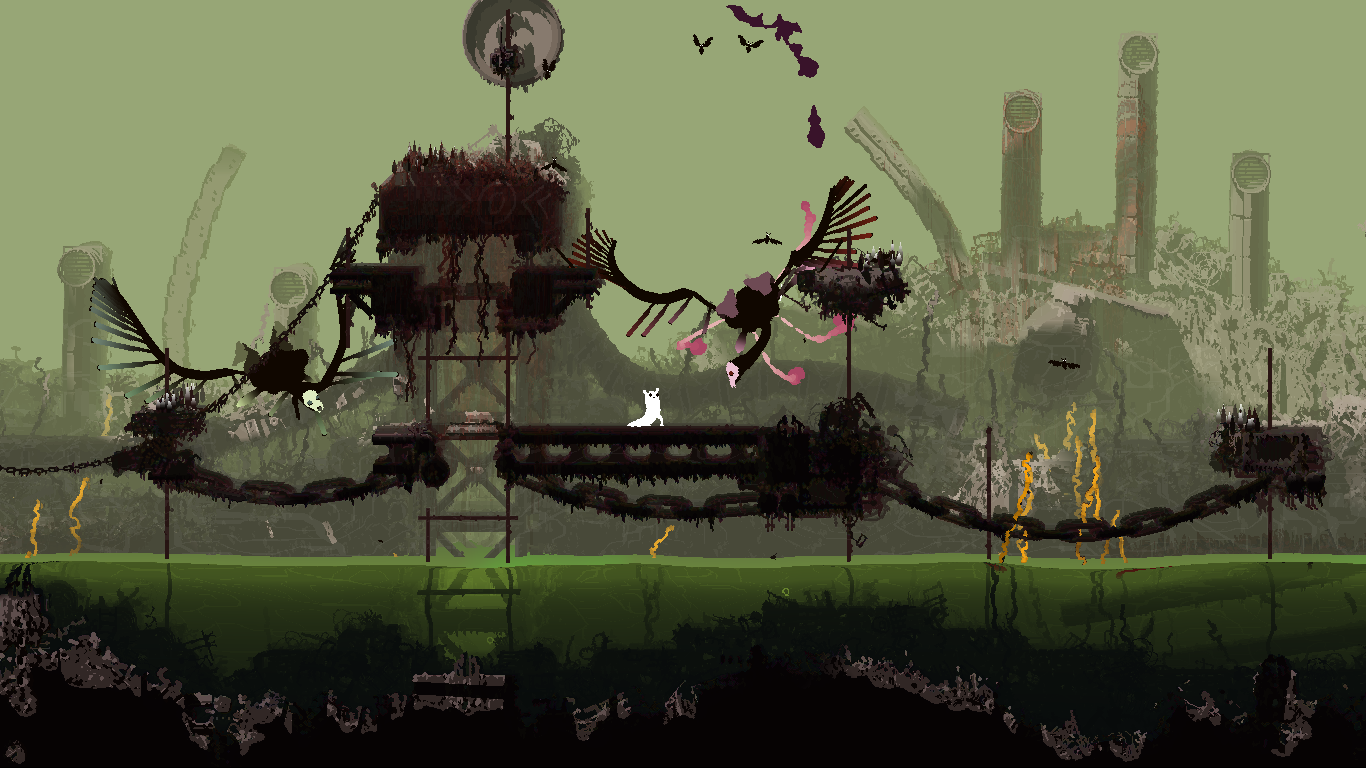 Your survival doesn’t depend on just a perfectly executed series of maneuvers – the game has to be in your favor that trip as well. The descending winged bastards are buggering off elsewhere, the dragons up in each other’s nethers before sniffing you out and you’ve cyclically inched upwards enough times that you know the path. It’s a matter of maintaining sanity and controller integrity until the right combination of enemy and food disbursement allows you to slip forward, hopefully without you drowning yourself by twitching a jump with the physically resonant but writhing controls. Thus is the myth of difficulty established.

It’s the same concept as Mario Party – hard work plays the merest atomic part, but ultimately fate is cruel and victory is random and meaningless. We each bought a ticket to the ride, but the idea that one is responsible for their own progress is an illusion, perhaps one that we must grip with white knuckles to maintain our sanity in an unforgiving natural order. Whether you win or lose in Mario Party or die in Rain World has little to do with your individual player input. While in Mario Party the point is to get together as a group and laugh about the mayhem in order to bear it, Rain World’s entire premise is about getting split off from your tribe, sealing your doe-eyed slugcat’s fate as gristle for the machine. Those who survive will convince themselves that tenacity and a will of iron are the forces propelling them back to the top, but really it’s a supernatural, Highlander-esque propensity for rebirth and masochism. 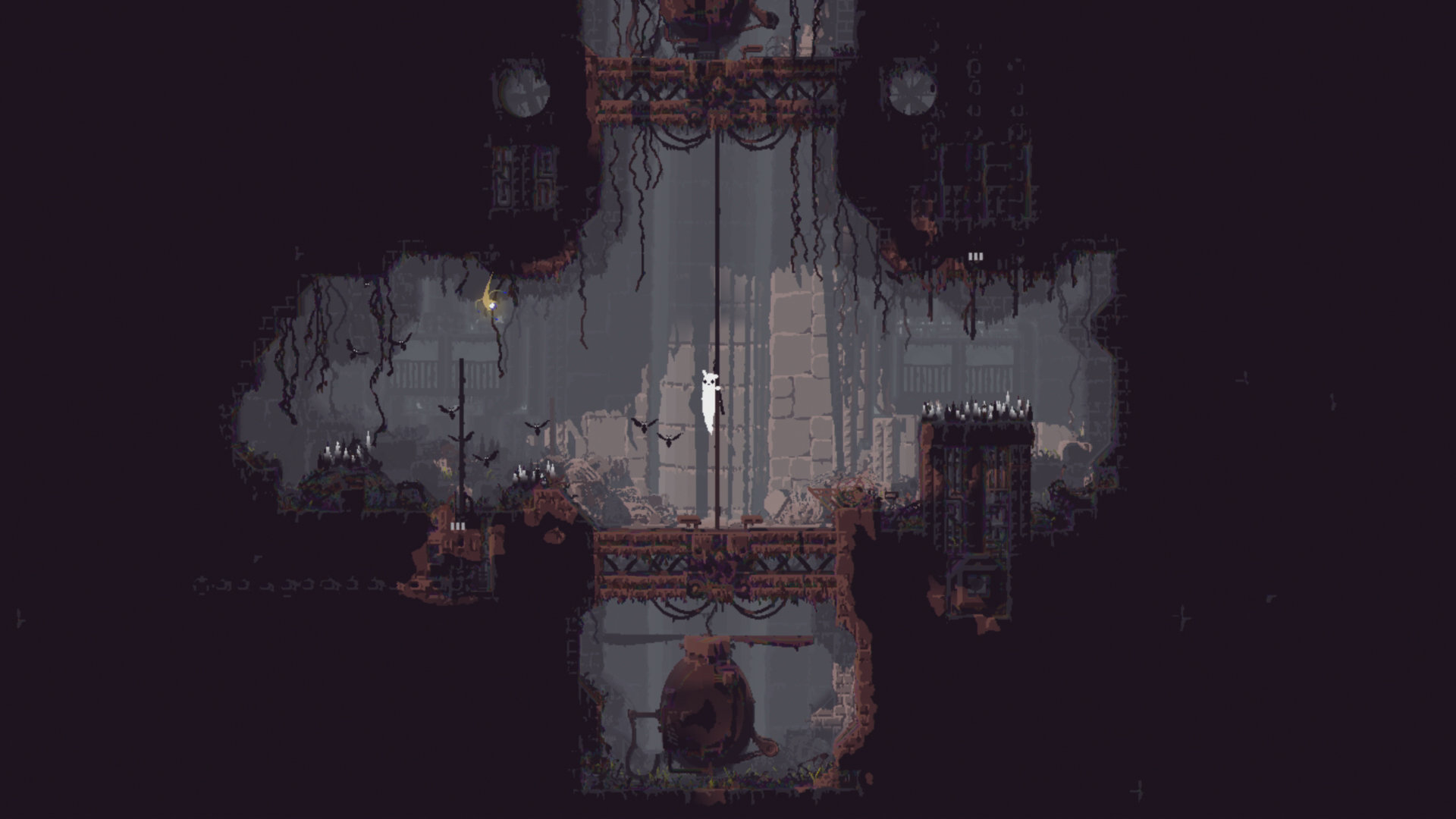 This may all smack of high sodium, a loser’s lament. I’d be lying if I claimed I’ve beaten Rain World or that I haven’t sworn like a sailor through all manner of ground molars and chewed lips while dying repeatedly to another fucking swarm of scavengers or wiggly jump over a yawning cavern. But eventually I found a peace. I accepted that this game wasn’t “fair,” and that was the point. Evolution was a numbers game promoting “survival of the fittest” as something to aspire towards, until humanity cheated the system by banding together as a multi-faceted biological unit who figured out tools. By entering this Rube Goldberg torture apparatus, the deck was stacked against me worse than a Mega Millions ticket. And just like the lottery, you can’t lose if you don’t play.

But as we bake the earth, such luxuries of societal living may dissipate, and I’ve come to accept a likely fate as food for a very unfair and grotesque transmogrification better adapted to a rusting world. Once I realized that my many absurd disembowelments were the very focus of Rain World, these became the clippings of a hedge, pine cones falling to the ground, a series of meditative cycles on an intentionally beleaguered path to enlightenment. I took a deep breath and stepped away, content with what I’d taken from the game’s majestic spaces and fluid felines. But I fully expect to return. When I do it’ll be in the supposedly easier “Yellow Slugcat: The Monk” setting, with only a sliver of shame.