In 1995, CD-ROMs were the shit. My mom once tried to explain how they worked. I didn’t get it, but I did understand that they allowed me to play games. Every Purple Moon game, Freddi Fish, Where in the World is Carmen Sandiego?, Myst and – wait for it – Microsoft Encarta ’95.

One weekend, while researching ermines in Encarta’s digital encyclopedia, I accidentally hit CTRL+Z and stumbled upon something . . . less encyclopedic. A jester stood on a castle drawbridge, beckoning me inside, while calligraphic text announced that I was entering “MindMaze.”

I’ve never met anyone IRL who played Encarta MindMaze, but according to a Reddit thread and a few YouTube videos, the game did exist. MindMaze was trivia ensconced in fantasy: the player has been transported back in time to a medieval castle and must answer questions to defeat the labyrinth, break a curse and be returned to their own time.

Now, I was primarily interested in this because I liked castles and could be tricked into playing educational games if they had even the slightest whiff of magic. MindMaze’s intro screen not only showed the beckoning jester but also a dragon peeking out of a window. Have I mentioned my youthful dragon obsession? Yes? Okay.

I may not have mentioned that at age seven I realized that I was a witch. As the veil thinned throughout October – and pop culture witches appeared more and more in store windows, my Twitter timeline and on Netflix – I’ve thought a lot about my personal relationship to witchcraft. I’ve been a practicing witch, with lapses in practice and in varying degrees of diligence, since the second grade, after writing in my Lisa Frank diary, “I’m a witch. I’ve decided.” That same year, I wore a black-hatted, broomstick-toting witch costume to school on Halloween. 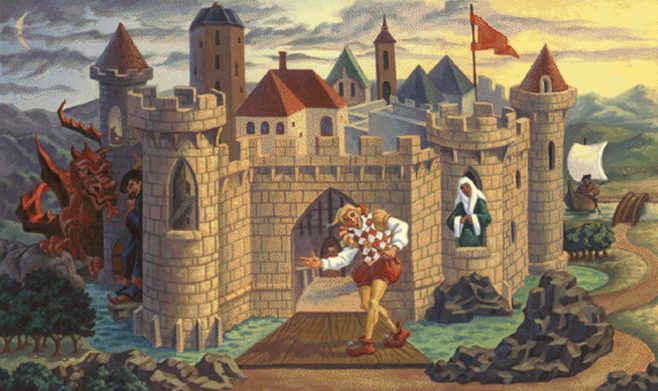 Over this past month, I’ve also thought a lot about these representations of the hag in popular culture – the green-skinned, warty witch – an image of which I’m personally very fond. On some levels, I relate to her. She’s the crone aspect of the Triple Goddess, the waning moon, the wise woman. I’m not especially wise yet, but I hope to be, at some point. More immediately, I recognize her: she’s Madam Mim from The Sword in the Stone and she’s the witch in Encarta MindMaze.

As you travel through Encarta’s castle, a witch appears occasionally. The MindMaze Witch is the perfect specter: green pallor, black hair, long brown robes. Her hands curl, claw-like, above a cauldron bubbling over with green liquid. The fire pit on which the cauldron rests sits in the center of a rather nice carpet, with no ventilation to speak of. She says, “You’re trying to break the curse on the castle, aren’t you? So public spirited! Or maybe you’re just hoping that once the curse is broken, I’ll send you back to your own time! No! Hee hee. Couldn’t be! . . . Oh, how did I get to be such a cynic?”

When you try to exit the room, a question appears. In one YouTube walkthrough, the banner reads, “Capital city of Denmark and of Copenhagen County, and a major seaport and commercial center.” Not even a question mark. The player chooses “Copenhagen,” trumpets sound and they advance to the next room.

When the player next encounters the Witch, she asks, “Do you see any witches around here? The last person who came in here screamed ‘Witch!’ at the top of his lungs. I looked around and I didn’t see one, so I turned him into a frog. I didn’t want to disappoint him, you know. Hee hee hee . . . Oh, don’t look so scared! I’m just a sorceress who happens to be a hag. I’m the one who brought you here. So get cracking, already! Figure out this puzzle! I’m not getting any younger!”

So there you have it: the Witch took you, the player, from your own time and deposited you in a cursed castle to answer trivia questions. It makes sense, sort of – the medieval NPCs probably wouldn’t know the answers to contemporary sports questions, or the most important figures in German early twentieth-century literature. But a late twentieth-century player would have a better chance of selecting Thomas Mann and continuing their slow creep through the castle.

Supposedly, at the end of the game, you battle an evil sorcerer to break the curse. I wouldn’t know, because I never got that far. It was 1995 – I didn’t really want to learn world history or geography; I wanted to break curses and hang out with witches. I’m just a sorceress who happens to be a millennial.