Much of Destiny 2’s narrative is delivered to us in shouts. The Red Legion, the game’s villains, descend from the heavens loudly proclaiming their colonizing intentions. Zavala, commander of the Guardians, plants his heavy boots and bellows at you to have courage. Ikora, the wizard Vanguard, screams in frustration and anger as her city burns down around her. Even after saving the day, you can still count on Lord Shaxx to admonish you to fight for glory in his crucible.

Despite all of this bombast, the game has plenty of quiet moments too. The places where these moments occur are those where humanity still has enough of a foothold to allow for the normal activities of daily life: the farm and the rebuilt tower. There, as I rustle through my inventory, dismantling weapons and selecting costume shaders, I overhear conversations between regular people about a variety of mundane, if illuminating subjects.

Down on the farm, small bands of resistance fighters recover from their recent skirmishes, trying to work out their next moves. Up at the tower, the conversations depend on the venue: In the marketplace, sellers hawk their goods (which, because they are not weapons, cannot be purchased) and gripe about late shipments and paperwork. In the hangar, mechanics pass around tips for dealing with malfunctioning helper bots, while soldiers get briefed with new orders. It’s in the hangar, while trading for gear with Cayde-6, that I overhear a group of soldiers gossiping about their awe and admiration for the Guardians, and their desire to prove their own worth in battle, thus exhibiting deeper stakes in the game’s events and outcomes than my immortal undead Guardian ever could.

Through these muted conversations, often heard while engaged in an unrelated task, I get a vastly better picture of Destiny’s universe than through its multitude of self-important and overly verbose cutscenes. They allow me to think of the world as a physical place, where people live and have their own problems, even while those problems mostly stem from having to provide the supporting infrastructure for your Guardian’s adventures. 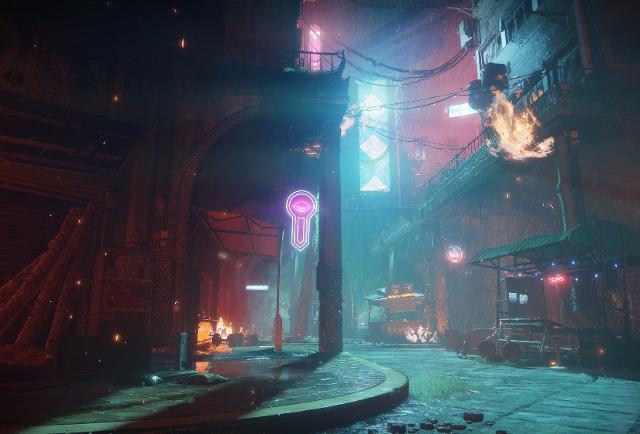 In a genre that is often deservedly seen as narratively weak and incoherent, the overheard conversations of Destiny 2’s NPCs highlight a place where open world games exhibit potential for narrative strength. Unlike the linear, story-centric games that studios like Naughty Dog put out, which encourage the player along through highly scripted encounters meant to ape the pacing of blockbuster movies, open-world games, with their extended breadth and repetitive nature, give us the opportunity for closer readings, simply out of the sheer amount of things to look at and the number of times we’ll probably have to go back and look at them.

These narrative elements are often derisively called environmental storytelling – using static art assets and pre-recorded audio to convey story indirectly to the player. For The Atlantic last year, Ian Bogost challenged: “Are the resulting interactive stories really interactive, when all the player does is assemble something from parts? Are they really stories, when they are really environments?”

In asking these questions, Bogost makes the assumption that games should deliver the same kinds of narrative structures long established by books and movies. He’s looking for a linear, reasonably paced plot, with notable characters, a big problem to be solved and a final resolution. He’s seeking a version of this traditional, rigid system that also happens to be highly modifiable, flexible and interactive. He doesn’t want a story told through scenery, eavesdropped keywords or a bit of looping animation; he wants a narrative that feels centered and that centers the player in turn.

It’s telling that the worst parts of Destiny 2 are the parts that attempt to adhere to this formula; the game’s cutscenes, its mission briefings and its endless proper-noun’d alien bad guys all fail to deliver me a plausible world that I can invest in or care much about. At the margins, though, in the oft-forgotten places, among nameless NPCs, there are stories that round out the shape of the world, that fill in details and entice me to look more closely at the digital space I am spending so much time in. 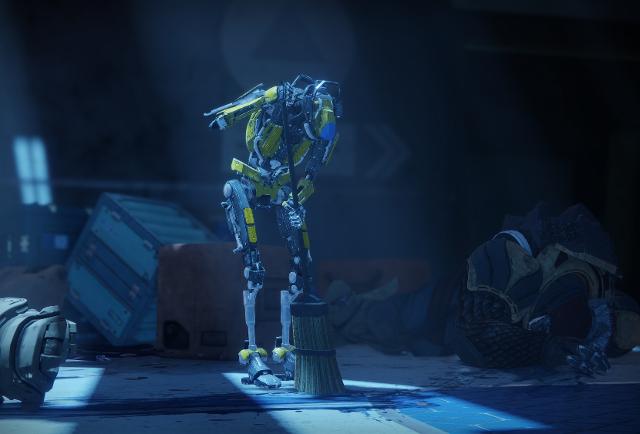 Other games with open worlds make this point just as persuasively. In God of War, the main story provides an ultimately unsatisfying examination of fatherhood and violence. All its hours of exquisitely mocapped and rendered cutscenes don’t measure up to a single moment when, traveling over a stretch of lake by boat, Kratos does a shitty job of coming up with a clever story to tell his eager and curious son. We learn from this encounter that there are things even the most powerful seeming parent can’t teach their child; a lesson we as children eventually learn as we get older and see our parents with grown eyes.

Another example is Dark Souls, where the melancholy of the world is endlessly reinforced not merely by its introductory cutscene but by the listless nature of the few figures huddled around the Firelink Shrine, and by the quiet sobs of the unseen firekeeper imprisoned below. It’s a game that is meant to be played and traversed repeatedly, and – as the numerous YouTube streamers devoted to uncovering its lore show – one which benefits from the close reading that spending so much time crawling through its dungeons and over its gusty ramparts encourages.

The mistake Bungie makes with Destiny is in not trusting players to enjoy an experience narrated as indirectly or opaquely as a game like Dark Souls.

The mistake Bungie makes with Destiny is in not trusting players to enjoy an experience narrated as indirectly or opaquely as a game like Dark Souls. Instead, the quiet moments are drowned out by the unironic calls to hunt and grind. This friction is audibly noticeable when walking around and hearing the far less interesting, far more repetitive barks of the named quest givers, amplified above the quiet conversations of the unnamed NPCs. They’ll happily repeat their congratulatory remarks for beating a story you haven’t thought about in months and offer you the opportunity to keep bouncing around the solar system and running missions for their own sake. You’d think there’d be some story to found among these highly polished quest givers and their curated adventures, but there isn’t, not really.

Meanwhile, over their shoulder, just out of focus but still faintly audible, are characters who contain within their apparent drudgery the real depth and heart of Destiny. They continue going through their motions; unaware of their own importance, unaware that you have drifted away from the endless scrolling lists of guns, from the forced quips of the quest giver, and are listening.