It’s difficult to find encouraging environmental news in 2018. While this often feels like a decidedly contemporary problem, that feeling miscalculates the reality, as made apparent by a recent screening of 1997’s Princess Mononoke, produced by Studio Ghibli. In Mononoke, which takes place in a fictionalized version of medieval Japan, director Hayao Miyazaki offers sobering, insightful perspective on the longstanding environmental crisis.

Mononoke highlights a critical moment in the expansion of industrialization into undeveloped lands, as the captains of industry (represented by Lady Eboshi, who leads the weapons manufacturing business in Iron Town) seek to extinguish all remaining opposition to development. This expansionist impulse brings into conflict multiple parties, including local government and the gods of nature, and eventually these tensions explode into mass violence. In the film’s climax, Lady Eboshi murders the Forest Spirit, a divine being with power over life and death. In its final moments, the Spirit destroys Iron Town and kills most living things in the surrounding area but ultimately brings new life to those lands (and leaves Iron Town lush and overgrown but in ruins).

This cataclysmic experience leads to a sort of epiphany among Eboshi and others from Iron Town, who recognize too late the value of the environment they inhabit. Humanity’s relationship with nature is permanently changed – the gods of nature are dead – but Eboshi and her followers commit to rebuilding their town in commune with the new natural world, rather than in opposition to it. So Mononoke presents a somber but still optimistic view of our relationship to nature: though we may bring horrible destruction upon ourselves, eventually these crises could lead to a realization of community and shared sacrifice that bridges divides of class and geography.

In reality, the business world’s responses to climate change so far suggest a different trend. Rather than unite with the broader public and cooperate to effect proactive change, many of the most affluent would prefer to insulate themselves from the real world’s crises – behavior indicating a continuity with history, not a break with it. This is apparent in the publicized excitement (and investment) that the ultra-rich display for extravagant developments like colonizing Mars. But it is also evident in their less public, more practical concerns. Behind closed doors, elites are focusing not on sci-fi solutions but on more mundane and callous preparations for apocalypse, like fortified bunkers and armed security forces to prevent the public from threatening the stability of the upper classes after conditions really deteriorate.

This isn’t just the behavior of a handful of anxious individuals. At an institutional scale, those with the most capital and structural power are moving to ensure the perpetuation of socioeconomic hierarchy on a warmer planet. Energy companies, for example, are modeling their future business strategies not on investments into renewable energy and ending fossil fuel production but on the assumption of at least 4 degrees Celsius of warming, an increase that will violently reshape coastlines and ecosystems across the globe. Plans like these indicate a total unwillingness to recognize any responsibility for climate change and the damage it will inflict. Instead, these corporations prioritize profitability in a dire future and assume their continued success will guarantee their own safety and security regardless of ecological circumstance. 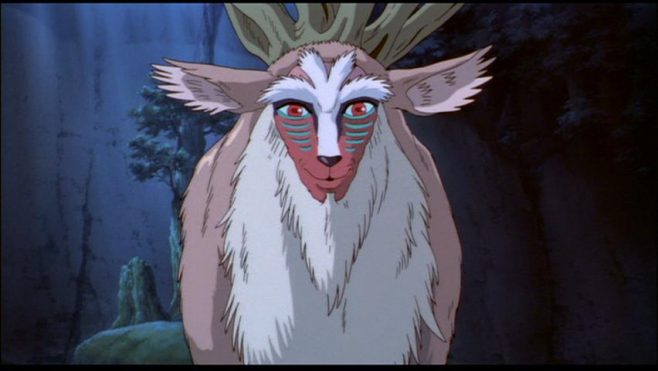 It’s tempting to see these reports, along with the Trump administration’s assault on environmental regulations and climate studies, as symptomatic of a recent turning point in environmental politics, and to believe that our governments, at least, were pursuing climate justice more earnestly before 2016. This line of thought is comforting but not totally honest.

On July 25, 1997, for example – coincidentally, just two weeks after Mononoke’s premiere in Japan – the United States Senate passed the Byrd-Hagel Resolution, which killed any possibility of the US ratifying the Kyoto Protocol, an international treaty that sought to reduce emissions among UN member states. The Senate claimed that the Protocol was unfair to the US – the treaty held different nations to different emissions standards – and argued that its enforcement would negatively impact the US economy and so prevented its adoption with a bipartisan, unanimous vote. President Clinton would eventually sign the treaty but, without ratification from the Senate, it was functionally irrelevant.

Though the Protocol was later adopted and ratified by other member states, the US’ refusal to ratify diminished its potential effectiveness. In 2001, President Bush withdrew the US from the treaty (despite its largely symbolic participation up to that point), ending its involvement in negotiations. Nations including Japan, Canada, and Australia requested substantial changes to its requirements and enforcement as the momentum behind the Protocol dwindled in the wake of the US’ exit. As of 2018, many of the treaty’s signatories had eclipsed their emissions targets. The Paris Agreement, adopted in 2015, set further standards without authorizing enforcement. Even if they were adhered to, the Agreement’s modest emissions goals likely wouldn’t keep warming below 3 degrees Celsius, despite claims otherwise.

Regardless of this shameful record, Mononoke’s optimism is not totally unfounded. The obstacle this optimism faces, however, is one of political economy. Whatever the public’s understanding of the urgency of pursuing action on climate change, or its willingness to make compromises to create a better future, this is a system in which corporate interests have wildly disproportionate influence over the collective choices that system makes. And those interests, like infinite growth through resource exploitation, are definitionally at odds with the idea of a sustainable society. Because this system functions thanks to an alliance between government and corporate actors, it can be difficult to fathom the kind of cross-class kinship via environmentalism that Mononoke envisions. The state both protects the private sector from public pressure and refuses to regulate it when that might be possible.

Strangely enough, this grimmer assessment of our situation appears in another Ghibli film released three years earlier than Mononoke: 1994’s Pom Poko, directed by Isao Takahata. Compared to Mononoke, Pom Poko is less grand in scope but far more comedic. It’s a bit surprising, then, to see how little optimism it contains relative to Mononoke. The film, based in the late 1960’s, depicts the struggles of a group of Japanese raccoon dogs (or tanuki) hoping to prevent the destruction of their habitat by the development of a new planned community in Tokyo. Despite their best efforts, which include the use of supernatural powers, the protagonists of Pom Poko simply fail. Development on the planned community proceeds as intended, the majority of their home is destroyed, and the film ends with a plea for the audience to be more sympathetic to the needs of animals and wildlife. 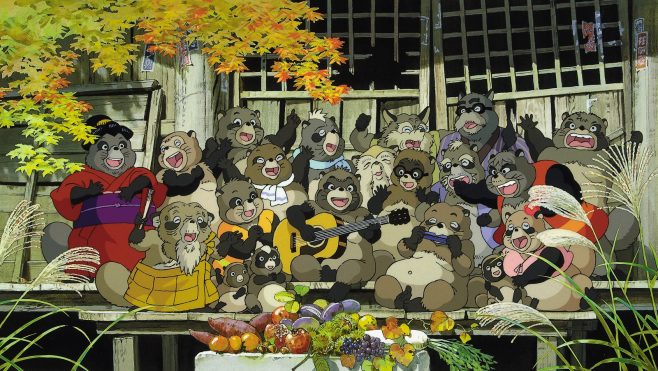 This bleak outlook reflects an understanding of environmentalism’s limitations when confronting contemporary economic development, and likely informed Takahata’s choice of setting. By placing his story in the post-war era of rapid economic growth and acceptance of capitalism’s ascendancy, Takahata recognizes capitalism’s ability to undermine potential challenges or reforms, its complete remaking of the social structure, the limits it imposes on our imaginations. Perhaps this same recognition also informed Miyazaki’s choice of setting for Mononoke. He instead focuses on an era before the systematization of capitalism, so before its total domination of our ecosystems and social lives. His film portrays the worst of this system’s violence toward nature but also allows space for the imagining of alternatives. He gives form to the optimism of the film’s ending by suggesting the possibility of structures outside of those we already know too well.

While this might seem like wishful thinking when placed next to a serious analysis of the environmental crisis, or even when compared to an earlier film with the same concerns from the same studio, it is also a refreshing, even necessary, reminder. The stakes around these ecological problems are as high as possible, and the people in power will not be enthusiastic in joining the struggle for environmental justice. But it’s important to believe we are not doomed. The work will be difficult, but there are better futures out there.

The (Sort Of, But Not Really) Radical Politics of Infinity War
Previous Post

Aretha Franklin and the Price of Excellence