No Accounting For Taste

This column is a reprint from Unwinnable Monthly #104. If you like what you see, grab the magazine for less than ten dollars, or subscribe and get all future magazines for half price

Marvel Studios would like you to know that Avengers: Infinity War is not part one of a two-part story. While that may have been an early idea back when the movie was called Infinity War – Part 1, the studio soon changed course and developed it into its own thing. Directors Joe and Anthony Russo see both Infinity War and its sequel as “complete stories.” Infinity War has “a beginning, middle, and end,” and, rather than it and Avengers 4 being one big film cut in half, they are actually “two very different movies.”

This is all a bit misleading. Fans of the franchise understand that Infinity War is not telling a complete story on its own and that its events will conclude in the sequel planned for release next year. Marvel was probably worried about the possibility that releasing a film in two parts, explicitly titled as such, could depress the box office returns on one of those releases. By changing the titles and talking publicly about producing these as two separate stories, the studio gets to have its cake (a $640 million opening weekend) and eat it, too (next May, when it repeats or exceeds those numbers).

But let’s take the Russo brothers at their word! Let’s say that Avengers: Infinity War is its own story and that it is not half of a bigger one. If this is the case, then we can think through the movie on its own terms. We can consider the implications of its characters’ actions and the trajectory of its narrative without regard to any hypothetical developments coming next year. If we do that, we might end up seeing the film as one of the most cynical, or perhaps candid, superhero films in recent memory. (Which is totally unintentional on the filmmakers’ part.) 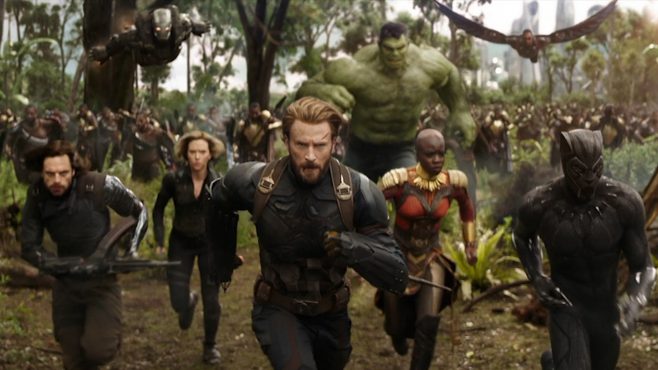 Infinity War follows various groups of heroes as they try to prevent Thanos from acquiring all six Infinity Stones. Thanos claims to believe that suffering in the universe results from overpopulation, as there are not enough resources to provide a decent standard of living for everyone. By commanding all six Stones, he would have nearly limitless power and could end half of all life in the universe by snapping his fingers. Despite the heroes’ efforts, by the end of Infinity War Thanos has done just that.

At various points in Infinity War, the heroes can prevent Thanos’ retrieval of an Infinity Stone by sacrificing someone in their group. Gamora knows the location of the Soul Stone and asks Star-Lord to kill her if they encounter Thanos so he doesn’t discover the location; Thanos overpowers Tony Stark and threatens to kill him unless Dr. Strange hands over the Time Stone; Vision possesses the Mind Stone, but removing it from him (to then destroy it) risks ending his life. In each case, the heroes refuse the transaction: Star-Lord can’t commit to killing Gamora (who reveals the Soul Stone’s location to Thanos), Strange gives Thanos the Time Stone to prevent Tony’s death, and Shuri tries but fails to disentangle the Mind Stone from Vision after Scarlet Witch refuses to destroy it (when she finally does, it’s too late; Thanos can already rewind time with the Time Stone and prevent the Mind Stone’s destruction).

Neither the film nor the audience wants the heroes to die. Each of these moments acts as an emotional climax and the filmmakers intend that the audience will hope desperately that the lives of the heroes will be spared somehow. That they all remain alive (however temporarily) and that it leads exactly where the story promises it will lead (the death of half of all life) is a remarkably candid acknowledgment of the hierarchy at the heart of the superhero mythology. Despite the fact that superheroes usually work to save people from all sorts of danger, the life of the hero is understood by both audience and creator to be more valuable than the lives of those they save. Infinity War takes the casual destruction that many found objectionable in films like Man of Steel and brings it to an extreme but logical conclusion. Everyone else dies so that the heroes might live.

If killing one superhero saves half of all life, then, uh, thank you for your service, Tony, but I’ve got some bad news.

Look, this is grim. The film really does place people in a situation in which they have to murder someone they love in order to stop the worst things from potentially happening. I am not suggesting this is an enviable decision to have to make or act upon, but if we are to believe the Russo brothers – that Infinity War is a single story – and if we are to believe the film itself – that any one of these deaths could have prevented Thanos from obtaining another Stone – then the calculus here, while harsh, is pretty straightforward. If killing one superhero saves half of all life, then, uh, thank you for your service, Tony, but I’ve got some bad news.

Dr. Strange has seen into millions of possible futures, though, and knows that the one in which Thanos gets the Stones in this way is one in which the heroes’ actions will be vindicated. But that’s all to be developed in Avengers 4. If Infinity War is a self-contained story, then our heroes are simply selfish to an unfathomable degree. Their unwillingness to act decisively, or to sacrifice themselves, is a blatant admission that the life of any one superhero is worth an incalculable number of other lives. This is an idea at the core of almost any blockbuster superhero story, but rarely is it ever acknowledged with such transparency. 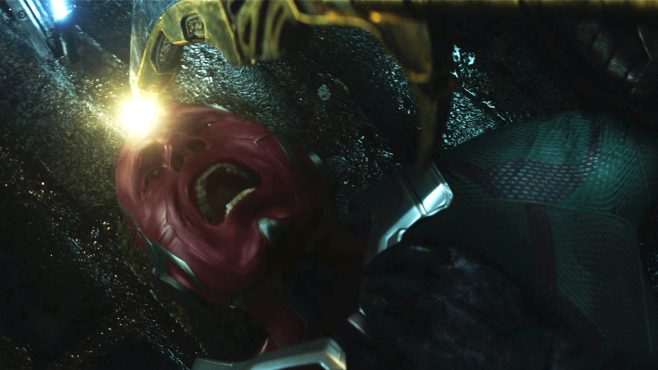 And what about Thanos, who extinguishes half of all in existence in pursuit of resource preservation? We can understand Thanos as holding a kind of Malthusian worldview, which presumes that finite resources lead to crisis because of overpopulation (rather than because of things like capitalist production imperatives). While Thanos’ solution seems as extreme as possible, his underlying assumptions are in line with mainstream political and economic thought throughout the US and Europe. In contemporary discussions about resource scarcity, observers often focus on topics like population growth in countries outside of western Europe and the U.S. Proposals for resource management seek to “control” population growth or reduce birth rates. These discussions come at the expense of any serious consideration of unsustainable economies in Western nations or the material demands of capitalist economies that insist on infinite growth.

The arc of this willful ignorance leads not just toward predictable resource scarcity but also to the unpredictable catastrophes of climate change. And because the wealthiest people in countries like the United States will be able to protect themselves from the worst impacts of these disruptions, we can see Thanos as representative of the results of this state of affairs: The wealthiest enjoy their vacations while much of the rest of the world struggles or starves. Like the film’s depiction of superhero egoism, this is a blunt acknowledgment of the brutality and arrogance inherent in America’s socioeconomic structures.

All of this analysis is, of course, total bullshit. Infinity War has no desire to reckon with these topics in this manner because the inevitability of its sequel hangs over every moment of the film. That sequel’s gravity pulls all of Infinity War’s themes toward it. While Avengers 4 may resolve the issues in Infinity War in unexpected ways – while some heroes may end up truly dead and some plans may go awry – it will probably not let the bravery and altruism of its heroes come into question to this extent, nor will it suggest that the types of people financing these movies are building their metaphorical lifeboats by exploiting communities across the globe.

All of this analysis is, of course, total bullshit.

Instead, Avengers 4 will likely give fans enough drama and uncertainty to keep them engaged while ultimately affirming the moral integrity of the franchise’s leads. It will show audiences victories with serious costs, but victories nevertheless. There are very few blockbusters that offer any critique of the implications of superheroes’ role in society or the impacts of capitalist economic development, though. It might be fun to pretend Infinity War is a film like that for the next eleven months.

No Accounting for Taste – The Right Wing Batman
Previous Post