Nothing says summer to me like mystery. We’ve been trained from an early age to expect the summer season to bring heavy, languid days devoid of real responsibilities, days that leave us free to explore dark woods or abandoned lots, to poke at trouble until it nips back at us. While my schooldays and their attendant summer vacation months are long past, I still feel an almost unconscious pull towards exploration when the weather gets hot. Enter Unforeseen Incidents from Backwoods Entertainment, a point-and-click adventure game released with perfect timing at the end of last month.

The expansive puzzler centers on loveable underachiever Harper Pendrell, a scruffy tinkerer with a heart of gold and an exceptional sense of humor. He lives in the small town of Yelltown, which also happens to be the hotbed of a mysterious new sickness that’s spreading alarmingly fast. When Harper stumbles upon a Yelltown Fever victim dying in the streets, she gives him an envelope with instructions to deliver it to a reporter staying in the town’s only hotel. Once he meets up with the journalist, it’s off to the races. Yelltown Fever is no small bug and its rapid spread is probably no accident.

While none of the narrative beats are particularly twisty, the story is satisfying with nicely complex puzzles based around item gathering, true to the point-and-click genre. What really makes Unforeseen Incidents shine is its unique characters and high production values. The voice acting might be the best I’ve ever heard in a game, and the hand-drawn style of the artwork makes the settings and people feel alive even as the animation leans towards the basic. The game is fairly large – I’ve put in around ten hours and still haven’t quite finished – and Harper reaches many different locales in his travels. However, I found myself taken the most with Yelltown itself. 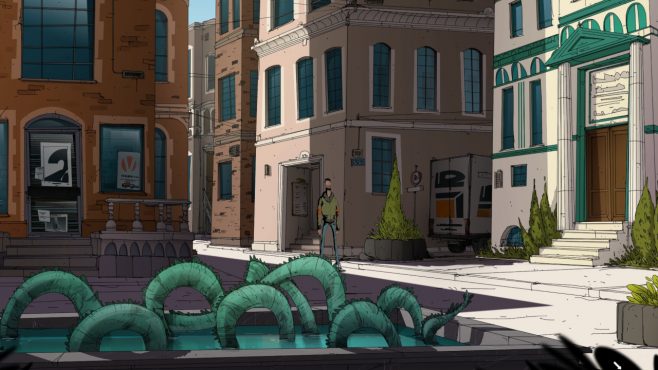 Even though the game looks like it takes place somewhere in the Pacific Northwest (and in winter, no less, really harshing on my “mysteries are best in summer” vibes), Yelltown’s run-down buildings and industrial aesthetic coupled with Harper’s near-constant snark gave me strong sense memories of exploring my own hometown as a teenager. Harper laughs about the unluckiness of the local hotel getting struck twice by lightning, but once he’s inside he moves through its charmingly decrepit halls with obvious long-standing comfort. He’s got a lengthy history with the desk clerk, which is established immediately with sharp writing and that stellar voice acting. He’s on good terms with the drunk who owns the junkyard, too. It might be real ragged around the edges of its grimy roads, but this is Harper’s town.

The town I grew up in isn’t as small as Yelltown, although the last time I visited it seemed alarmingly tiny. I can still remember the walk from my house to the supermarket where I’d go on summer afternoons to thumb through magazines and comic books. I’d pass by a field the size of half a city block that had a beat-up couch in the center of it, and a minuscule convenience store called Neely’s with a sign outside that read “fresh meat,” even though I don’t remember anyone ever talking up the butcher counter. What I do remember is that it had a great candy selection my friends would sample with a five-fingered discount. One summer afternoon, I tried to do the same to impress a classmate. I ended up paying for it anyway because the clerk had already made me as a potential thief as soon as I sidled into the place, since every goddamned kid my age tried to lift candy there (and probably worse – I was more than a bit of dork).

The main thoroughfare didn’t have many trees and there was an auto shop across from Neely’s that sold tires. Even now the smell of rubber sitting in the sun makes me think of being that age. Hot tar, too. On particularly warm days, car exhaust can take me back, as can the sight and sound of litter trapped in a chain-link fence, fluttering like dirty moths on a breeze. Walking down this avenue to go read comic books was when I got my first catcalls, far too early in my estimation. I didn’t understand what was happening until suddenly I did, and I never knew what it felt like to walk unselfconsciously outside again. 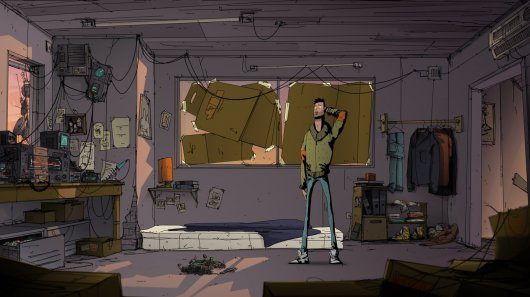 When I was 13 a girl in my class turned up stabbed to death in another of the town’s fields. I didn’t and don’t know the details about everything that happened. We didn’t know each other well, but she could be funny. Sometimes I dream about her.

Unforeseen Incidents and Harper Pendrell both maintain their humor throughout the story, but the undercurrents of death and conspiracy run dark and deep. Harper was probably perfectly content to stay forever in his Yelltown apartment tinkering with his ham radio, cardboard taped to the window to avoid the morning, making jokes along with the authority figures in his life about his being a bum. I get the value of laughing while surrounded by a certain kind of relentless gloom, a shabbiness that won’t ever quite cross over into decency. But that defense has its limits once a dead girl shows up. There’s a point where one just needs to figure out what the hell is actually going on. This summer, I get to solve the mystery.