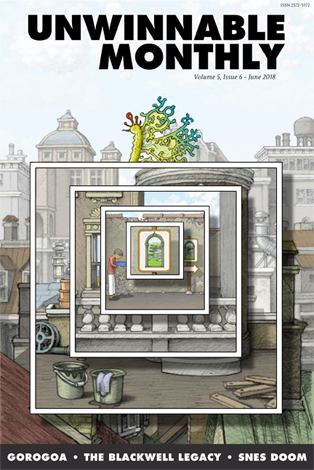 That said, Monster Prom, the new dating sim by Beautiful Glitch, isn’t really about seducing monsters. It’s about getting rejected by monsters. You play one of four avatars attending Spooky High, vying for the attention of six charismatic classmates. Spooky High’s standards differ from the U.S. public school system’s: Raves occur daily on the lawn; alcohol is available during lunch; every dateable character is over 18.

I downloaded the game with a lot of hubris. Having been in love with the Beast since grade school, I figured I’d instinctively know how to romance each monster. I’d land every ending, unlock every achievement, and start writing. I’d crush it.

First, I was rejected by the homicidal mermaid princess (my obvious first choice). Then, the permanently coked-out party ghost. Then, the elitist hipster vampire (too real), the demonic prince of Hell (hot), the lovably idiotic werewolf jock, and, finally, the capitalist Gorgon who became my true quest: Vera Oberlin. 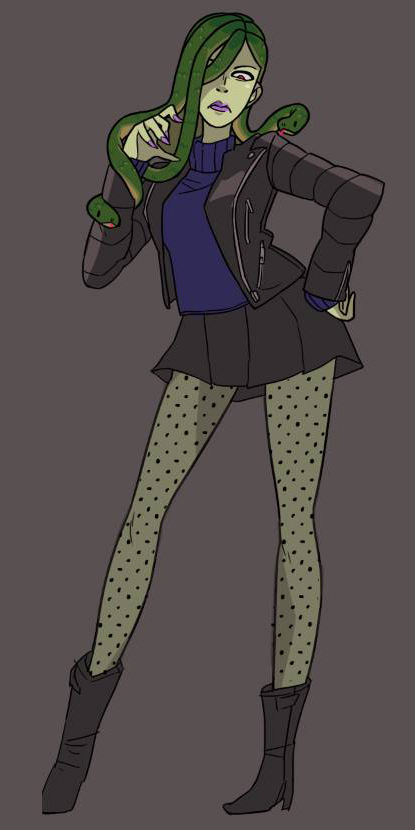 I know what you’re thinking: Why would I go for a cutthroat capitalist? I have little interest in capitalism. But listen, Vera is intelligent and fashionable in addition to being blisteringly cruel. Also, her hair is made of snakes. Is my hair not also full of metaphorical snakes—venom, secrets, and self-sabotaging impulses? That’s relatable.

Ancient Greek tragedian Aeschylus wrote that “snake-haired Gorgons…hate mankind so much that the mortal who looks at them dies.” A glance from Vera seemed worth it.

So why couldn’t I get the girl with snakes for hair to fall in love with me?

I decided not to work on this article until I successfully attended prom with Vera. After all, how could I expound on my romantic failures without also understanding how to win Vera’s heart?

So now I’m filing this article 13 days late, my desktop cluttered with screenshots of Vera’s rejections:

“Reopening a MySpace account would be less harmful to my popularity than dating you.”

“Sorry, I’m focusing on my career…my career in not dating losers like you.”

“What a shortcut to lame town!”

“I’d shoot you, but I’m saving these guns for my wedding night.”

“You’re just a player, cynically selecting whatever conversational options you think are most likely to make me like you!” That’s not even mean, just accurate. 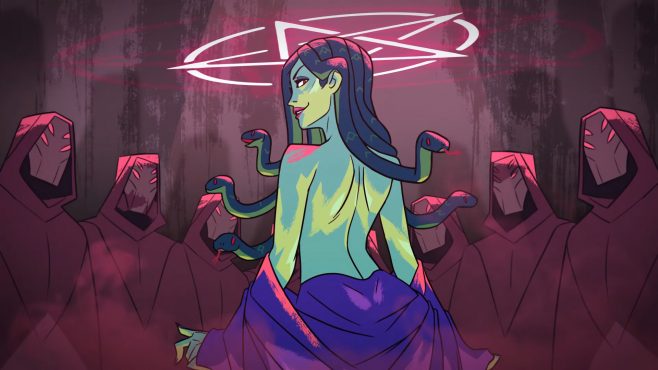 How appropriate that my perpetual rejecter shares a name with a school that waitlisted me as a literal teen. I never got in from Oberlin College’s waitlist, but I did get better at winning Vera Oberlin’s favor (evidenced when her scowling face floats across the screen with a heart). She likes money and sex; one way to gain approval is by suggesting she instigate a cafeteria-wide orgy, then film it and blackmail its participants. This is not a course of action I’d generally recommend for getting a date, but in my consumption with winning Vera’s heart/ending, I learned her preferences for scheming, extortion, and exploitation of labor. I made many suggestions that go against my principles, all for a nod across the cafeteria table.

The problem was, she still wouldn’t go to prom with me.

You’re just a player, cynically selecting whatever conversational options you think are most likely to make me like you!

By my sixteenth failure to seduce Vera, I knew I’d become the monster. Her meta-commentary about me was correct: I was cynically selecting whatever conversational options would make her like me. I kept asking her to prom even though she kept calling me a loser. I started thinking about incel narratives, my eye twitching, while feeling weird about my affection for dating sims. I guess incels don’t exist in dating sims because there’s always a way to “win” the object of your affection, present example notwithstanding.

As I started feeling like a creep, Vera’s consistent rejection became my favorite thing about her. She’s autonomous and doesn’t tip-toe around rejection. She has cold-blooded snakes to keep her warm.

After one of my many dateless playthroughs, an epilogue stated that “Vera realized she was a character in a videogame, which infuriated her. She spent her life making connections and building power because she’s not part of the game: SHE PLAYS THE GAME. So be careful…maybe now she’s the one pulling YOUR strings.” Honestly, I could imagine worse outcomes.

Where Are the Disabilities in Visual Novels?