Nearly seven years after its release, Katawa Shoujo is still the most prominent visual novel with disabled characters.  That’s not a good thing.

I love Katawa Shoujo.  It’s actually the visual novel that got me into the genre in the first place,  and for a long time it was the standard by which I judged other VNs due to a combination of good art, good music, and in-depth storytelling.  I’ll still read through Shizune’s route at least once a year. That said, my introduction to Katawa Shoujo was on a Youtube Let’s Play video wherein most of the comments referred to it as a game where you “bang crippled chicks.”

If you cared about VNs at all around 2010, you probably heard the story of how 4chan was working on a game involving sex with disabled characters.  4chan’s reputation preceded the project, and trolls fanning the flames didn’t help matters as development went on. It didn’t matter how much work went into fleshing out sincere characters or crafting a story in a dating sim that expects hours of investment before you even get a kiss (if you somehow manage not to screw up the relationship, which is incredibly easy on some routes, let me tell you).  Everyone latched onto the fact that there was sex with disabled girls, so clearly Katawa Shoujo was just some fetish hentai by 4chan, as opposed to the astounding VN that it proved to be.  Even now, people still know it as the game with disabled romance options.

That description upsets me for a number of reasons, but the one that’s pushed itself to the top of my list most recently is because you can still refer to Katawa Shoujo as *the* visual novel with disabled characters, because they’re really aren’t others out there.  Go on, take a moment and try to think of even one VN from the past year that had a prominent disabled character. I’ll wait.

Disabled characters in VNs are a rarity, mathematically speaking.  The Visual Novel Database allows you to search certain tags to help readers find visual novels with, say, a harem ending or a modern setting.  If you search “disabled heroine” you get 88 hits, of which 25 have official English releases. “Sickly protagonist” nets you a less impressive 61 hits, 24 in English.  There is no “disabled hero” tag, even looking at Katawa Shoujo’s entry page.  If you try to get into more specifics (like “blind heroine”) the numbers fall even further, largely because a lot of tagged illnesses or disabilities tend to be either made up anime issues like the madness in Saya no Uta, or the unspecified illnesses of Narcissu.  This leaves at most a few dozen appearances of actual disabled characters in a catalog that, as of June 20, housed over 22,000 entries. 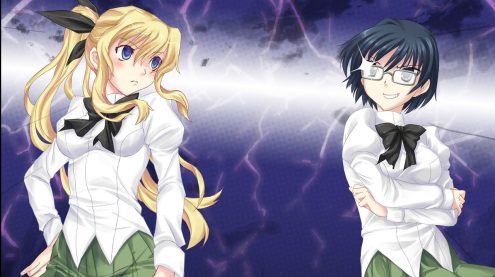 Why is it so unfathomable to have a disabled hero or heroine in a story?  Visual novels should be a prime genre for characters with physical limitations or psychological issues.  This isn’t a video game which demands that the protagonist should be in peak physical and mental condition to cannonball out of helicopters and subsequently strangle a Nazi zombie with their bare hands.  It’s typed up storytelling with pictures. In a genre that seems increasingly bogged down by stagnant slice of life tropes and cliches, why not introduce the radical change of (gasp) having a character with some sort of physical and/or mental struggle? The writers just need to decide that this time we’ll have a deaf girl or a boy in a wheelchair, and then write the rest of the story.  That’s it. There doesn’t need to be some alternative meaning to it that will further the plot for an able-bodied neurotypical protagonist; your blind character doesn’t have to be an oracle, your schizophrenic doesn’t have to exist as an object of pity. There just has to be some acknowledgement that you can have disabled characters in stories, because disabled people exist. You’d think we were still living in times of Ugly Laws for all the representation these groups get.

Even the visual novels that currently have disabled characters are still deeply flawed.  Fetishizing madness adds nothing to the representation of neuroatypical individuals, since it’s not attempting to portray an accurate depiction of mental illness but rather another facet of a character (almost always a woman) that you want to fuck.  The romance options in Katawa Shoujo clearly struggle with many aspects of daily life that other people wouldn’t bat an eye at, but the girls are still afflicted with what I might call “pretty disabilities” in the sense that nothing about their struggles prevents them from engaging in a romantic and sexually active relationship with the protagonist.  These scant depictions of disability create a very narrow margin of disabled characters that can be deemed “acceptable” for storytelling in this genre, and it all hinges on how much the handicap will affect the main character’s ability to connect with them. It dehumanizes people with disabilities by implying that they can’t have their own story, and can only contribute to someone else’s.

Disabled people do not exist to inspire non-disabled persons.  But for whatever reason writers can only abide by including handicapable persons in their narratives when those characters have some sort of auxiliary function tied to the protagonist’s happiness or well-being.  Why is it so hard to fathom that these people can exist in visual novels besides their use as lazy accessories to another person’s development? Why can’t we have mental struggles beyond the hackneyed general insanity defense that pops up to excuse a character’s poor behavior?  Why can’t I have a VN that refuses to replace a person’s missing limbs with robot parts and instead allows them to be an amputee? Throw out your shy girl cliches and give me someone with legitimate social anxiety, damn it!