Yup, you read that right, Dear Reader – this is the final Last Week’s Comics. It’s been an amazing ride. When this 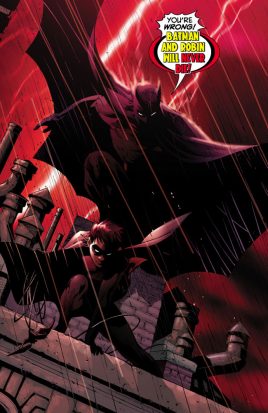 column started, I was editing the column and Brian Bannen was writing it. I’d fill in when he was on vacation or life got in the way. As Brian’s family grew, he stepped away and I picked up writing the column with Stu, Mike and Sal with Rob Roberts editing. Pretty soon Jill Scharr, Charles Singletary, Sara Clemens and David Shimomura joined the column with Sal and Mike. Thus we had a revolving door of sharp comics critics who love what the medium is and what comics as an art form can be. Go ahead, take a look at their work. It’s some damn fine comics criticism!

I want to thank Brian Bannen, Rob Roberts, Michael Edwards, Jill Scharr, Sal Lucci, Charles Singletary, Sara Clemens, David Shimomura, Amanda Hudgins and, of course, our dark emperor, Stu Horvath. LWC would be nothing without y’all and I can’t wait for everyone to see what’s next.

But… where the HECK am I going to write my giant retrospective on The Wicked + The Divine once it finally ends?!

It was back in the summer of 2016 that I first approached Ian about adding me to the Last Week’s Comics roster of writers. I was a longtime Unwinnable subscriber and reader, and would have done almost anything to write for them. I remember being super nervous about sending my inquiry email to Ian – it wasn’t anything much beyond a “hey, can I write about comics for y’all sometime?” – and was surprised he got back to me so fast with a casual “of course!” Thanks to his friendliness then and now, and in true Team Unwinnable fashion, I felt like part of the group right away. The past two years has been a true pleasure, I’ve had a complete blast writing about WicDiv, Saga, Paper Girls, Sex Criminals, and my numero uno indie fav, Elfquest. 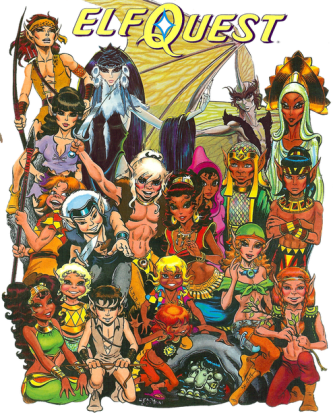 Elfquest was my intro to comics as a kid, and I’m so lucky I had a space to regularly cover The Final Quest as Wendy and Richard Pini brought their long-running series to an end this year. One of my issue reviews even got picked up by the official Facebook group and the Pinis stopped by to let me know they dug my point of view. If you had told Little Sara that someday she’d write something the creators of her favorite comic would read you would have blown the little mind out of her non-pointy (maybe slightly pointy) ears.

During my LWC tenure, I also got to read some really excellent new and indie books that I never would have known about otherwise: Dark Horse’s amazing horror noir Vinegar Teeth, Kingdom of Skulls, a cool creator-run comic about man and myth from King Bone Press, and the criminally underrated She Wolf, another book from an auteur creator that’s one of the few pieces of media that really, like, gets how scary and weird and gross and yet strangely wondrous puberty can be and does it all in a vaguely psychedelic 80s setting with dreamy, free-flowing visuals. (I want moar!)

Speaking of teenagers and trips down memory lane, I got to dig through several volumes of the Creepy Archives, too, which triggered sense memories of laying on the floor of my bedroom eating sunflower seeds until my lips puckered from salt, poring over Stephen King’s Creepshow graphic novel for the umpteenth time. That and the first four books of The Complete Elfquest were the only comics my local library carried for a long while, until they got the first trade of Neil Gaiman’s Sandman – then, of course, all bets were off when it came to my comics consumption.

Last Week’s Comics was always good at reminding me what it is to be a comic book person. I looked forward to Ian’s weekly check-ins every Friday, where he’d ask what we had read from our pull lists and chatted about whether or not he was keeping up with his own. LWC always felt like a bunch of buds, casually shooting the shit about our favorite books and teams. I’m sorry to see the column go, but I’m proud as heck to have been a small part of such a fantastic run. I also can’t wait to see what Unwinnable’s comics coverage evolves into next.

You didn’t think you’d get rid of us that easily, did you?

So I wanted to try something a little different for the last hurrah of Last Week’s Comics. I want to just look at one-page sized panel, the final page of Darth Vader.

I’ve not been shy about how good Darth Vader is. It’s very good. But this last page is truly amazing. It’s a one page of a bunch of Tusken Raiders worshipping a massive effigy of Darth Vader.

First, we get this really striking Dutch angle. It’s bombastic, dramatic, and barely gets everything into the frame. It gives us a massive sense of scale and messes with our perspective. It’s disorienting. It’s evocative of the feeling one gets when they see something truly awesome.

The colors are striking too. Tatooine is rarely shown in shadow. It’s binary suns set in background as fire illuminates the crowd and the storyteller. The massive effigy looks outward uncaring and unfeeling. It’s shoddily made, its details somewhat unclear. But it’s clearly Vader. 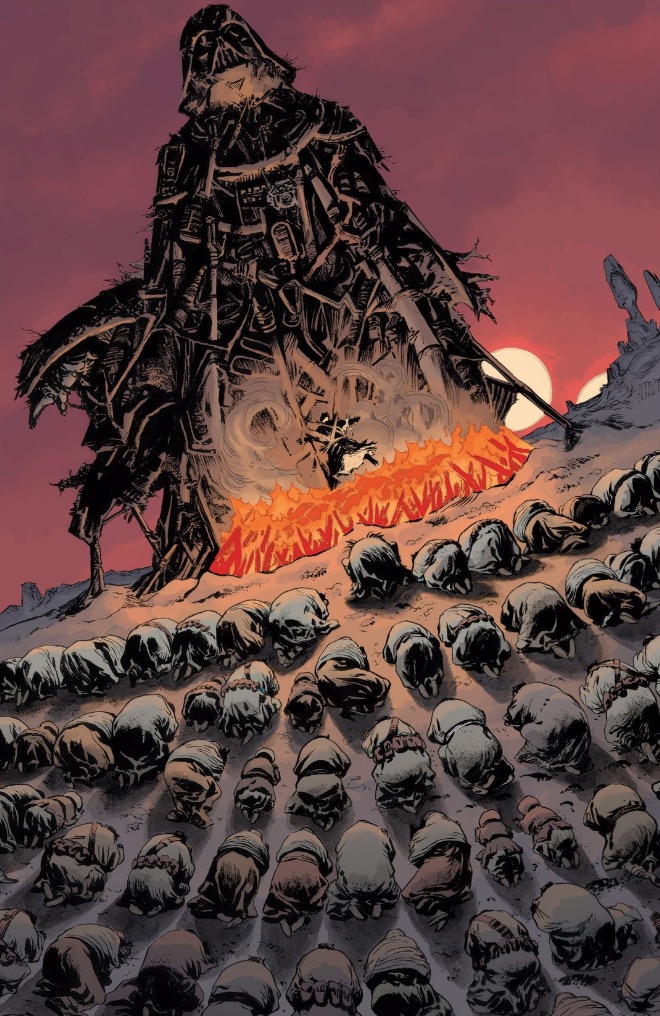 Next, this is the beginning of something we don’t ever really see anywhere else in the Star Wars universe. The Empire has a way of crushing everything that stands in their way but the conquered have never come around to worshipping them. Here, a Tusken Raider who had their village destroyed comes to preach the gospel of the Dark Lord of the Sith.

And that’s the most important part. Comics participate in a kind of myth making. They might be repetitive and formulaic and fit into a monomythic cycle but the way they build heroes and villains is a kind of storytelling that has more in common with the tales of yore than a novel.

The coda to Darth Vader lovingly show us how the meaningless actions of one become the central focusing story of others. It speaks to a tradition of epic that is best kept alive in comics. While it would be a lot to say there’s a Homeric quality to this type of storytelling, here we see a figure light only by flame giving a story to the masses.

I’ve always kind of snuck in my comics. Curled up in the dark somewhere with a tablet or a low light. I don’t remember the last time I read one before sunset. It’s how I unwind and let a story wash over me. I devour them, preferring to read whole arcs instead of waiting. But here, at the end of Darth Vader, we see one beautiful panel, an entire page, remind us of how a story, even a wrong one, can build a community.

Around 8 years ago at the beginning of this second decade of the 21st century Ian and I were at a party. He suggested I contribute to an ongoing feature on the Unwinnable website, one that I regularly read beforehand. I was honored and thrilled to have a place to write about comic books, and I still am. It’s been wonderful contributing to Last Week’s Comics and reading what so many other talented individuals had to say about what they were digging week to week. So much has happened to me in this time that having LWC as a writing place to go back to helped me understand myself as well as my comic book fandom. I’m missing it already.

Here are some last minute shout-outs to classic comics and new releases at the time that I never got around to covering:

Some of my favorite Alan Moore stuff here. A precinct of superhero cops must uphold the law in the insane city full of super humans Neopolis. Moore said that he was inspired by Hill Street Blues when he wrote this, and it shows. The 12 issues of this series work as 2 seasons of a TV show, so it’s basically the closest thing we’ll get to a TV series penned by Moore. Wonderful character work, plotlines that border on looney yet very human, and incredible detailed artwork from Zander Cannon and Gene Ha. Trying to find all the comic book easter eggs in the background becomes impossible, but rewarding all the while. We forget that the famously cranky Moore does love comic books, and on books like this, Supreme and 1963 that love is multiplied into infinity with every word and every detail.

It’s unfortunate that, outside of a few things, classic Golden Age hero Wesley Dodds hasn’t had that much exposure in the last couple of decades. We’ll always have this run written by Matt Wagner, Steven Seagle and illustrated by Guy Davis, Rick Taylor, Alex Ross and John Watkiss to name a few. Wesley Dodds is a man of wealth who uses who his resources to right the evil that haunts his dreams at night. He dons a gas mask and becomes The Sandman, righting the wrongs in post-Depression era New York City. For a comic about the Golden Age nothing is held back about what was wrong with that era socially and economically. It’s gritty noir magic, and another wonderful Vertigo Comics series from the 90s.

A personal favorite of mine. Unfortunately this bizarre and psychedelic character hasn’t had his day yet, although he 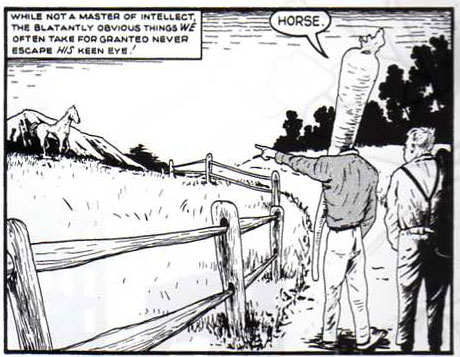 came close to making an appearance in Mystery Men, a movie also adapted from Burden’s comic book work. Find back issues and collections of this comic on ebay and Amazon, and immerse yourself in the unique weirdness of the flipper-wearing man in a carrot mask that shoots flames out the top. Oh, and he’s armed with a bologna cannon. Just don’t read too many comics in one sitting, or you’ll end up going insane and accidentally recreate his origin!

Almost four decades in Los Bros Hernandez continue the ongoing saga of Love & Rockets. While the series is similar at times to a soap opera the genres covered are far more diverse. Punk rock mixes with magical realism, and the characters will stick with you forever. Heartbreak Soup or Maggie the Mechanic are great trades to start with reading one of the richest indie comic books ever.

Stuff I loved that I meant to cover:

While it makes some sense that it took so long for the Riverdale to meet the Ramones, it’s still no less of a match made in heaven when it finally happens here. It’s one of those cases where elements of Archie Comics were inspirational to the wacky blended brew of pop culture that inspired the Ramones, and a reminder that the Ramones themselves will live forever as a part of that brew, over 20 years since they shouted out their last “1234!”. A perfect Archie crossover.

I kept telling myself that I would write something about this, and then I ran out of opportunities. An awesome and relatable book about a teenage girl growing up in Manchester in the early 1990s, this book explores her relation with her parents, religion, music, jobs, boys and drugs. It may not be for everyone when the narrative goes off into an acid trip, but it’s rewarding for everyone who sticks through it. Kind of like an actual acid trip. A deeply personal and immensely enjoyable read, I can’t wait for the follow-up volume from Mardou.

That’s it for now, see you all in the future and thanks for reading!

The Meaninglessness of Maturity in God of War