Nostalgia can be a tricky thing to employ. It can transport you to a bygone time and place, but rely too much on it and you have nothing new to say. The recently released Dominaria, the newest set in Magic: the Gathering, could very easily have fallen into this trap. With the set being heralded as a return to the setting Magic started in, Dominaria could have gotten stuck celebrating the past with every single card, bring back old mechanics left and right while trying to bring back the feeling of playing Magic back in the day. Dominaria doesn’t do that, though, at least not entirely. Though the set uses nostalgia as a jumping off point, it as much points to the future as it does honor the past. 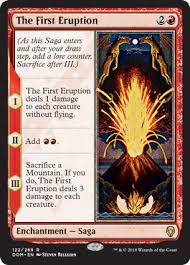 The new Saga cards typify this duality. A new Enchantment subtype, they portray major events from across Dominaria’s long history. These cards aren’t mired in the past, though, as the very method by which each Saga unfolds is like nothing that’s been seen in Magic before. Attached to each Saga are three different abilities that trigger sequentially, mirroring the event the card is portraying. When you play it or draw at the beginning of your turn, you put a Lore Counter on the card and complete the Chapter whose number is equal to the number of counters on the card. It might take a while to complete, but it’s an incredibly smart way to portray large-scale story events in card form.

Dominaria also puts Legendary Creatures in the spotlight by printing a plethora of them even at the Uncommon rarity. Many of the creatures’ names feature nods to past characters in the story, indicating descendants, or in some cases, returning characters. But these cards now matter in a new way. Anything that’s an Artifact, Legendary, or a Saga is considered Historic. That in itself isn’t new, as having certain card types matter, like Artifacts, has been part of Magic’s history throughout. The reason Historic is so refreshing is the flexibility in deckbuilding it inherently allows for. Take Jhoira, Weatherlight Captain as an example. Her card reads that whenever you cast a Historic spell, you draw a card. To build around her, you could fill a deck with Legendary cards, or you could make a deck that’s mostly artifacts. You can even make a deck that has a mix of all three. The play space Historic opens up is vast.

And let’s not discount the power of aesthetics. The Sagas look like no other Magic card that’s come before, with a vertical text box running along the left side of the card and murals depicting the events along the right side. And Legendary cards have a new card frame that sports a crown on the top to mark the card as Legendary. Dominaria could have went all in on the nostalgia and printed cards in the old card frame that the game utilized in the very beginning, but the fact that Wizards of the Coast is willing to mess with the formula bodes well for the future.

And that’s the thing about Dominaria: It’s not like going home again. The land has changed, and Magic along with it. But that shouldn’t be seen as a bad thing. Magic is a growing, evolving game still, and the fact that 25 years later it’s still branching out in new directions is a testament to the strength of the game itself and the people behind it. Dominaria reminds us where we’ve been, but also that progress is forward momentum.

Dominaria, Magic The Gathering, The Board Soul

The Serene Adventures of Above and Below
Previous Post