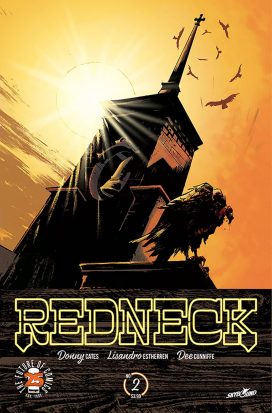 “Once upon a time,” the narrator states, “if one of our own was killed, facts and reason be damned, we would ride in that town. And for fear of not killing the right one, we would just kill everyone.” It’s a vampire code that seems to have served the undead well. Redneck is the story of the Bowman family. They’ve been living a relatively quiet life (for a pack of blood sucking vampires) in the heart of Texas for decades. They live off cow blood behind a Texas barbecue. Donny Cates, Lisandro Estherren and colorist Dee Cunniffe deliver a damn tense second issue. It’s the day after Bartlett’s vengeance fueled attack on Father Landry and the town of Sulphur Springs.

Redneck # 2 expands upon the Bowman’s living situation and introduces two humans that work for them – Phil and Evil. They bury Slap’s burnt remains and remove one of his teeth – an apparent memento for Slap’s father, JV. In the meantime, JV asks Bartlett if he killed Landry, but Bartlett hadn’t let that side of himself go in a long time – he was chock full of savage bloodlust and his higher brain functions were tossed to the side.

Estherren and Cunliffe’s art and colors pace Cates’ script perfectly. Estherren uses a variety of angles and shadows to ratchet up the tension while Cunniffe washes the book over in a hot Texas haze. The pressure between the Bowmans and Landry builds to a literally explosive climax that promises nothing short of fire and blood.

Redneck feel like it has more in common with Southern Bastards and Criminal than it necessarily does with 30 Days of Night or The Strain. In the letter column, Cates promises some terrible things are on the horizon for these characters. As much as I dig Kim Newman and Paul McCaffrey’s Anno Dracula: Seven Days in Mayhem comic, Redneck is the kind of down and dirty vampire comic I’ve been craving and I can’t wait to see what kind of shit Cates rains on the Bowmans. 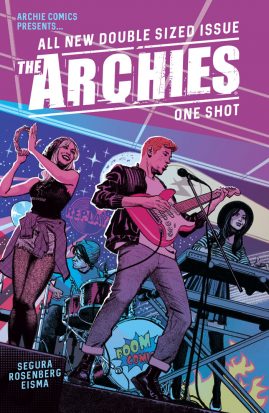 The Archies One Shot

The Archies is a classic Archie tale. While it clearly takes place in the “New Riverdale” continuity, the story follows the Archie archetype and it’s a hoot! Writers Alex Segura and Matt Rosenberg chronicled the Archie gang meeting punk legends in Archie Meets the Ramones last year, so a comic about The Archies is a perfect follow-up!

This issue serves as an origin for Archie’s titular band. In classic form, Jughead and Archie go to check out a new music club, The Jackpot. Strategically located between Riverdale, Midvale, Greendale and Midville. Jughead’s cousin runs the joint and gets Archie a gig. The only catch? Archie doesn’t have a band. What follows is a classic three act romp complete with Archie being a gigantic bonehead and Jughead still being his best pal.

Joe Eisma draws and iconic and energetic Riverdale Gang. His work is right up there with Fiona Staples, Erica Henderson, Veronica Fish and Derek Charm. Eisma’s storytelling during the live music scenes are fluid and exciting. There’s no music to read but the pages are kinetic. It’s a helluva lot of fun!

The original Archies were 1960s bubblegum pop inspired by The Monkees and the Lemon Pipers whereas the new version draws inspiration from Violent Femmes, Built to Spill, the Clash and the Vaselines. That said, it’s a classic Riverdale style story with some new trappings. Pick it up and enjoy!

Bromance and The Gentleman Bastards