Spell on Wheels #1 introduces Claire, Andy, and Jolene, three modern witches whose house is robbed by an ex-boyfriend of Claire’s in the opening scene. This seems to be more than just a crime of passion or revenge, however, since the ex is searching for specific magical artifacts under the orders 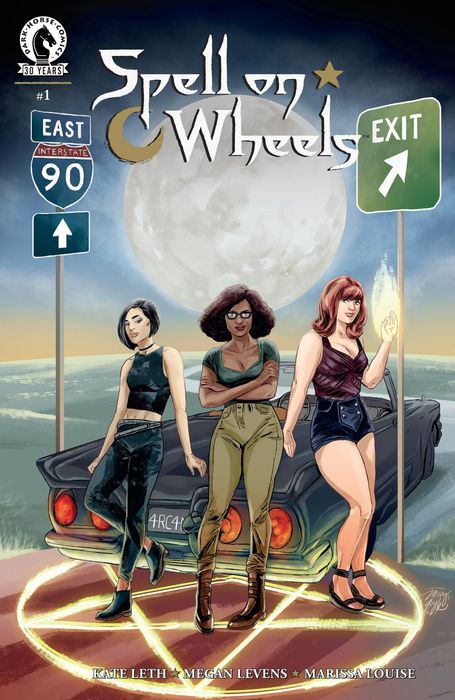 of an unseen and unknown foe. After the burglary, the trio discovers listings for some of the stolen items on the Goblin Market, an online auction house for magical goods, and sets off in a snazzy black convertible to hunt them down.

Marissa Louisse’s colors are poppy and Levens’ art style is just this side of cartoonish, calling to mind Archie and other teen-friendly books, though both retain a slight edge. Each character’s face is drawn to be incredibly expressive, highlighting anger and laughter in equal measure. I’m also a huge fan of the way Jolene’s tattoo sleeve is colored.

Leth writes the three women with warmth and humor, each one of them displaying distinct personalities and talents. The dialogue, if not always quite “real,” is always snappy. It’s also very expository – there’s hardly any actual magic in this issue, for example, as much of the plot focus is on discussing the potential power of the stolen objects – but that’s to be expected from the first issue of nearly any series.

The press materials for Spell on Wheels compare the series to other supernatural fiction pieces like Supernatural, Buffy, and The Craft. The first issue is certainly a solid example of the genre, and I’ll gladly stick around to see where things go. Hopefully we’ll get more show and less tell in issue #2.

Seeing the lyrics of forgotten Kiss single “A World Without Heroes” from their miserable concept album Music From The Elder was the first sign of what I was in for reading this issue. An incoherent attempt by Kiss to diversify their song content beyond partying and sex, The Elder was an album assembled by a thinktank of music industry bigwigs in the early 80s. Lou Reed was even brought in to class the joint up, and may have even helped 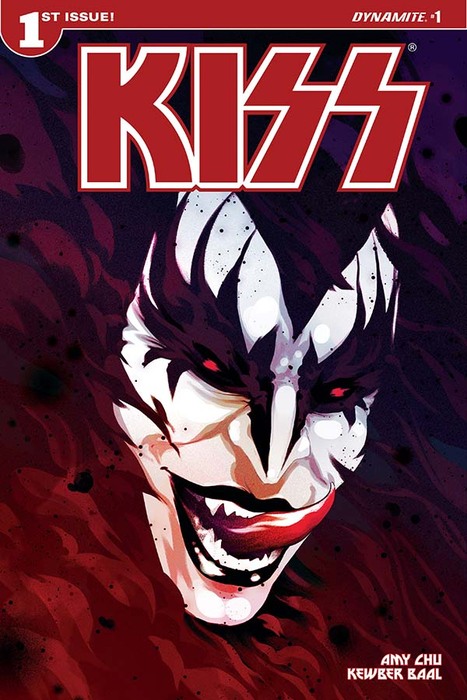 write the nonsense quoted above. To sum it up, it was a financial disaster that finally drove Kiss away from their makeup and fantasy leanings, and more into pastel colors and licking things up. What it seems like with this issue is to get as far away from Kiss the band as possible, and to tell a little dystopian science fiction yarn.

In the future the world has been driven underground after a great war. Over 2 million people inhabit Blackwell, the last great city in the Earth’ s underground. Orwellian imagery abounds, although weirdly it’s the symbols of Kiss that are most prevalent on police vehicles and ED-209 looking peace keeping robots. In the background of one classroom scene we see a portrait of Blackwell, who I’m assuming founded the city. There’s also a lot of talk about The Protectors, which I’m assuming ties into Kiss.

Four kids find a map and end up going on a romp where they accidentally and rather easily uncover a giant greenhouse adorned with the star symbols of singer/guitarist Paul Stanley. A giant tentacled robot chases them away. All the time I’m reading this I notice that the kids clothing kind of look like Kiss outfits. By the end of the comic they find a computer named Morpheus, who unlocks the next part of their quest.

After perusing Wikipedia I learn that Morpheus is the name of the teacher fromThe Elder. I’m under the impression that this comic is a science fiction take on the flimsy quest of that album. Unless there’s a monstrous plot twist coming up I don’t really care.

The problem with Kiss, or more specifically capitalist ruler and Kiss caretaker Gene Simmons, is that he takes himself VERY seriously. It’s almost Trumplike how seriously Simmons takes his legacy of simple hard rock music about sexual liaisons and throwing a party. When the members of Kiss appear in this comic will it be anything different than previous Kiss comic books? Probably not.

No slam against writer Amy Chu or artist Kewbar Baal though, they do their best with the material. It’s probably a creative nightmare having your work approved by Gene Simmons. I hope that maybe there’s more to this than just another Kiss Meets The Phantom of the Park or meets Scooby-Doo, Archie or Marvel Comics characters, but it will probably just be the same old Demon, Starchild, Space Ace and Catman rolling in and collecting the money for their unseen real-life counterparts (well Gene Simmons and Paul Stanley mostly). I will eat my words though if Kiss turns out to be Orwellian overlords that have reduced a future society into nothing but a mindless monument to a 70s hard rock band who sang “You really like/my limousine/you like the way the wheels roll.”

Kieron Gillen has given readers all sorts of delights during his tenure on Darth Vader and the final issue, #25, was no exception. I never knew how much I wanted to see that until I saw it and it was glorious.

In fact, along with Salvador Larroca, Gillen has given so much to Star Wars as a whole. The time gap between A New Hope and  The Empire Strikes 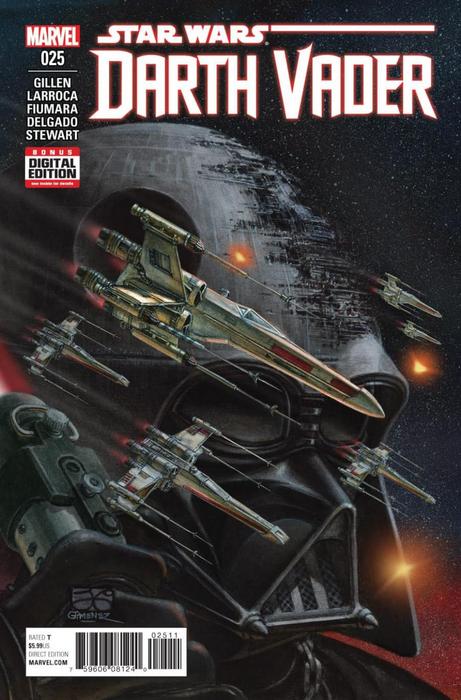 Back never really needed to be filled but fill it they did. We got to see the Emperor punish his apprentice, the Empire struggle to build the second Death Star, Vader secretly build an army and search for his son, and we even got to see inside his head.

However, most important of all, Gillen and Larroca gave us Dr. Aphra.

Vader has always cut an imposing figure but knowing that he survives into Empire kind of limits the amount of danger he could be put in. In fact, considering how much we know about where the major players are at the beginning of Empire it limits what can happen with many characters.

Enter Dr. Aphra. Through it all she’s been the one who could die. She’s been the wild card that didn’t have a place in any of the movies. If anything, she’s been the most dynamic part of DartVader as a series.

Aphra is new, interesting, and doesn’t fit neatly in the mold of any other character in the Star Wars universe. While it’s sad to see Darth Vader wind down it’s heartening to know she’s going to get her own series.

Darth Vader #25 doesn’t provide any revelations. It’s a quiet story about Vader tidying up loose ends (Aphra among them) and the power of the abusive relationships that fuel the Sith. And tidy them up he does. The end of the arc presents the dark lord triumphant and the slate essentially cleaned. All that’s missing is a blurb about how they got some information about Hoth.

But perhaps the most special thing about Darth Vader #25 is the coda. Gillen and Max Fiumara (Abe Sapien, Four Eyes, BPRD) compose an absolute symphony. Without saying too much, its wordless fantasia with notes of the original *Wickerman*, that scene where C3PO explains Star Wars to the Ewoks, and the original Japanese inspirations for Darth Vader’s design. It’s more than worth the cover price, it’s worth the cover price of the entire series.