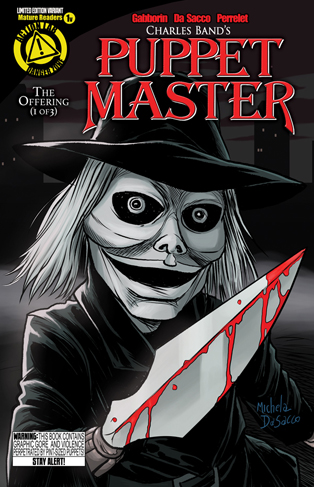 Tales From The Crypt. Tomb of Dracula. Eerie. Creepy. Swamp Thing. Hellboy.Frankenstein by Bernie Wrightson. All of these famous horror comics pale in comparison to Puppet Master #1, the chilling new attempt at adapting horror movie puppeteer Charles Band’s legendary group of pint-sized terrors. Watch as a group of horny teenagers looking to party at the abandoned Bodega Bay Hotel get more than they bargained for, as they become the victims of the legendary living puppets of Andre Toulon that supposedly still roam the premises, murdering anybody who doesn’t make an offering to them in the form of a doll. By the end of this issue I realized the true terror that can take place in an old abandoned hotel that I haven’t felt since the first time I saw The Shining.

Ok, while this comic isn’t on the same level as anything mentioned above, and the whole concept of murderous puppets goes back to the anthology days of Tales From The Crypt, Puppet Master #1 is a fun comic nonetheless. Fans of the franchise will definitely enjoy the callbacks writer Shawn Gabborin makes to the earlier films, and also the fact that all of Toulon’s puppets make appearances in this comic. Tunneler, Pinhead Jester, Leech Woman and Torch all have moments to shine in this issue, as they each help dispatch trespassers to the hotel.

Michela De Sacco’s art is also quite effective. He is able to achieve what the movies mostly cannot by actually making the puppets threatening through effective usage of lighting and perspective. Due to budget restrictions the movies always tend to skirt around things that this comic can pull off with aplomb, like Tunneler drilling through the heads of two unknowing people making out in a gory highlight of this issue. The fact that all of the puppets appear in this comic is quite the coup, in the movies there would often be inexplicable reasons why only 4 or 5 of the 8 of them were making an appearance, other than off-screen budget reasons.

I have a confession to make – I’ve seen all but one of the movies in the Puppet Master franchise. I bought a cheapo collection at Best Buy a few years back in the hope of watching them and then writing an article for Unwinnable similar to my “Dollar Store Conan” article I wrote back in 2013. Instead the marathon of nine movies basically left me temporarily brain damaged and unable to write anything. There really isn’t much to say other than the first one is a fun movie that I remember watching with my cousin over and over again 25 years ago. One summer in the late 90s we tried renting as many of them from the video store as possible but the store only had up until the also great part three. When I finally got around to watching part four and beyond I realized that the store probably made a wise investment in not ordering any more of them. I will say that Retro Puppet Master is a fun later entry though.

There’s a weird contingency of us out there, the Puppet Master faithful. That’s basically who this comic series is for. The fact that they hold off on the origin with Andre Toulon hiding the puppets from the Nazis and then killing himself is a pretty self-aware joke, since the movies tend to recap the origin every time, as if someone is really going to watch the cash-in clip movie Puppet Master: Legacy as their first entry into the movie series.

So for those of you eagerly waiting for the next entry after Axis Rising in the film series this comic is for you. It’s also currently 99 cents on Comixology, so you can’t really go wrong there. It’s a fun brisk read that reinforces the menace that these puppets’ appearances imply. I feel like the movies dropped the ball with the fact that these are horror films first and foremost, instead opting for decades-spanning continuity that ended up contradicting itself majorly. Reading this comic is the first time in a while where I’ve been reminded of the fun that this franchise is capable of delivering, like it did those first few times my cousin and I rented the VHS tape so many years ago. 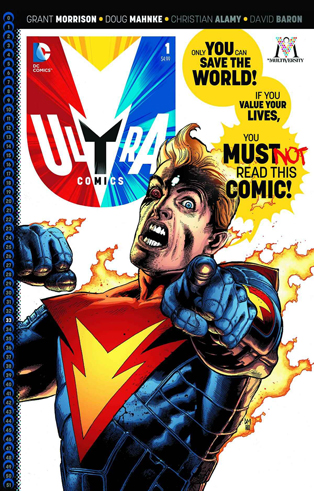 Heavy Meta!  Ok, got that out of my system.

The Multiversity, a creation wholly its own, yet representing all of DCs creations, wraps up its mind-bending run.  Ultra Comics is our hero, as well as comic books personified (dig artist Doug Mahnke’s spread on pages seven and eight, depicting “superhero behavioral codes, from Golden Age to Modern inclusive:” from the ultra do-gooder, to the sad brooder, to the unhinged anti-hero.)  Writer Grant Morrison taunts readers – all of us – beginning with the cover (or back to the first issue really,) telling us that if we even read this book, we’re responsible for the horrors within.  But like our hero Ultra, we can’t help but go on in disbelief, and maybe even with selfish greed, needing to see how things end.

This is a fabulous convention, something that really engages comic book fans of all ages (twelve-year-old me would have flipped, wondering – with a last grasp at adolescent innocence – if I could somehow alter the ending.)  So, for reading through to the end, I simultaneously have ended any chance of good persevering in the Multiverse, but I am rewarded with my favorite type of ending: an unhappy one.  As much as I love an unhappy ending, I did feel a twinge of sadness watching Ultra die, his body breaking apart, his last breaths and thoughts blinking out.

I still haven’t processed the entirety of The Multiversity.  Is it simply fifty-two universes coexisting in one Multiverse?  Is it something so purposely broad thatanyone who reads comics, who has invested their life into their favorite characters, can have room to simultaneously exist with anyone else’s opinions of the same characters?  I feel The Multiversity is something readers can return to, bringing a different perspective with each read.  Maybe each visit will let us identify something new that Morrison is referencing from some far corner of DC history.  Also, being able to read the series as a whole (instead of in monthly installments) may help in this understanding, or possibly drive someone mad, I’m not sure which yet.

Love him or hate him, Grant Morrison is a hell of a talent.  The breadth and depth of his knowledge of comic book history is uncanny.  I enjoy how each chapter displays a different artistic team.  It keeps things fresh and adds an extra sense of wonderment.  I’m eager to see what the crazy bastard has in store next. 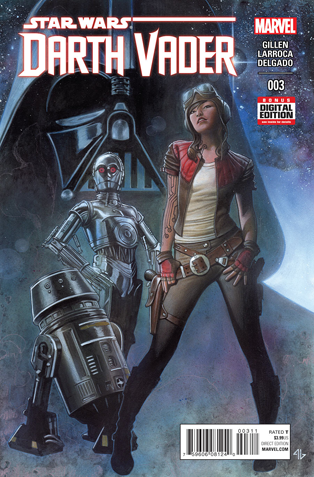 It took three issues, but Darth Vader has finally found its groove. Withthe introduction of Doctor Aphra, an Indiana Jones like adventurer, Kieron Gillen injects some much needed levity into a story heavy on its big bad anti-hero. I’ll admit, the first two issues of Darth Vader were a bit difficult to navigate due to the fact that one of cinema’s greatest villains was moving out of his one-dimension comfort zone. It’s hard to imagine Vader as anything other than the brooding Sith Lord who dominated the screen in all of his appearances (well, save for his Frankenstein-like creation in Revenge of the Sith), but Gillen brings him to life in a different and surprisingly humorous way.

The introduction is culled straight from the Indiana Jones movies as Doctor Aphra seeks to get a hold of a piece of technology that, according to her, does not belong in a museum but in an armory. Aphra is a much needed shot in the arm to the series, and her character is vibrant, fun, and scene stealing. Seeing her flounder her way through a conversation with Vader as she tries to both honor and pay homage is painfully real and hilariously awkward.

The comic is full of inversions too. Vader is a more fun version of himself, Aphra is the sycophant Vader always wanted, and the introduction of Triple Zero and BT-1, murderous versions of C3PO and R2D2, helps to give
the series a life of its own. IT may be a Star Wars property, but Kieron Gillen is showing us that he’s capable of putting his own mark on the universe.

And Salvador Larroca’s art is gorgeously rendered with John Cassady like perfection. It’s hard to not to fall in love with Aphra as she’s both beautiful and sexy, and Larroca’s comedic timing – including his bored Darth Vader – make the comic light and hilarious. Edgar Delgado’s colors are sleek and glossy, and the added artistic touches give the art a cinematic realism.

If you haven’t been reading Darth Vader, this issue is the one that should convince you to join in. It’s punchy, quick, and super entertaining. Where Darth Vader had been a decent comic, it is now a great one. After this issue, it’s clear to see that Kieron Gillen has much more in store than rehashing the skulking villain of The Empire Strikes Back.

Unwinnable Presents: Unlistenable Episode 55 – From A to Zed