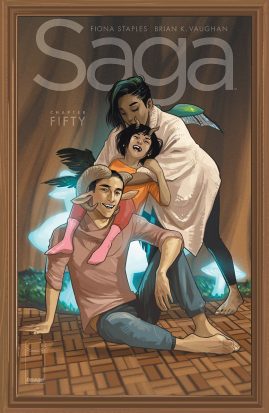 Saga hit the big 5-0 last week and as Unwinnable Comics Editor Ian Gonzalez said to me, kicked off the issue with some um, splashy splash pages. Issue #50 begins similarly to the way issue #1 did – with Marko’s face between Alana’s legs. In the first issue he was helping to usher his baby girl into the world (creation!) and this time it’s purely for pleasure (recreation!).

It’s a helluva way to kick things off, and the scene serves to remind us how well the couple works together and just how connected they still are, all these years later. Future Hazel’s narration kicks in right after Alana and Marko’s pillow talk, slyly informing the reader that her parents aren’t really that big on anniversaries – why give an ultimately arbitrary date any greater import than any other? A clever beginning to the fiftieth issue.

Indeed, other than that bit of lampshade-hanging, this issue pretty much ignores its own semicentennial status and keeps inching its various storylines forward. Alana and Marko decide to keep their family as together and free from public scrutiny as possible, and choose to continue keeping Hazel’s existence a secret while maintaining as much normalcy for her as they can. Unfortunately for them, Ianthe and The Will, whom she’s hilariously rebranded as The Help, continue to close in on the little family, leaving a bloody trail in their wake.

Prince Robot IV is trying to do right by his little family too, revealing more to journos Upsher and Doff about his intel on various factions in the war colluding with each other in order to wipe out entire nations of “undesirables.” These scenes are probably the most poignant in the issue, with Upsher and Doff explaining that his story, revelatory as it is, won’t sell nearly as well as one about a half-breed baby being born to a Landfallian and a Moonie, so they’ll need to find a way sensationalize it before they can get their money and thus guarantee Prince Robot’s, Petrichor’s, and Squire’s safekeeping in Jetsam’s version of the Witness Protection Program. (Little Squire may have some ideas of his own on this front.)

Even though there are no real fireworks in their fiftieth issue (excepting, perhaps, those sexy opening pages), Vaughan and Staples keep their story and characters compelling. They also continue to incisively critique our own habits of newsmaking and consumption with their “little” comic book, and I am very much here for it. Until next time.

Dark Nights: Metal #6 is one of my favorite books in a while. I don’t say that lightly. There’s something about the scale at which the arc operated and the beautiful reunion of Snyder and Capullo that warmed my cold heart. 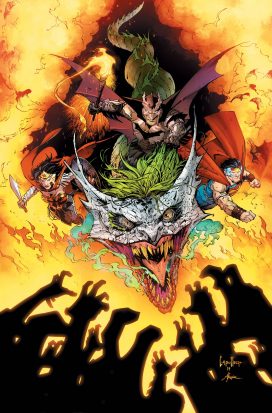 Metal wasn’t an arc I was sold on at first. It was one that I felt was bogged down by its size and lack of attachment. I wasn’t sure who it was for. Me, a Batman reader? A Justice League person? Who should be picking up this arc where so many little clues had been dropped for so long? Honestly, it ended being for anyone who loves Batman and “bad things.”

We didn’t just get an evil Justice League, we got an evil All-Batman Justice League. The Batman Who Laughs might be one of my favorite characters in almost as long as I’ve not read a book this good. The other nightmare Batmen and Wonder Women and Superpeople and everyone are all equally interesting. Snyder has always been strongest when he gets to do horror and this is Snyder at his peak.

Sure, Dark Nights: Metal #6 has plenty of cringey sentiments too. It’s all about hope and digging deep and believing in yourself. That’s all fine. It’s not my favorite but considering this was a story about the end of the universe because of how hard Batman has Batmanned I understand its need to reinfuse “light” into the story.

Perhaps the weakest element of Metal #6 is that it’s insistence on grounding itself in the strange, austere prose of Hawkman. It pulls me out of the story, asking me to read in a new tone through the lettering and the art. It’s not as fun as it seems the rest of the book is having.

Perhaps the strongest is the wide open note that it ends on. Changes are coming to the DC universe. It’s not a  relaunch but it looks like a new exploration of unknown territory. I’ve never been a stickler for continuity, blow the whole thing up and let’s set sail for open water. It’s a good time to be reading DC comics, let’s hope Metal’s door opening final pages aren’t an unfulfilled promise.