I’m actually surprised that Sean Murphy hasn’t received more coverage for his series, Punk Rock Jesus, especially given the level of religious fanaticism in our culture and the poignant and controversial statements Murphy makes in the comic. Punk Rock Jesus is a daring and confident epic that isn’t afraid to offend while it makes a name for itself. 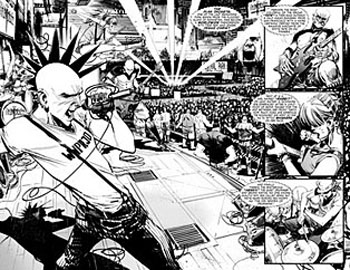 As we approach the finale of the series, the conflict between Chris and Slate is gaining steam, and Thomas’ role is becoming greater. Murphy gives a bit more depth to Thomas’ character, and while we can see him as a violent protector, Murphy gives him a level of humanity that was evident, if not overt.

The comic also takes clear shots at organized religion. Chris’ interactions in the book, with every character, are laced with a level of malevolence for organized religion. Murphy calls out the contradictory nature of people who call for violence in the name of religion, and those who claim to be doing God’s work while pushing brutality and hatred. I’m impressed that Murphy has the gall to make these claims, and with such confidence.

Also, because Murphy is also the artist on the book, he has full control of every aspect of the story. I love the gritty, ink-heavy illustrations. The lack of color helps display Murphy’s true skill, and where some panels are chock-full of chaos, Murphy is good at focusing the point of view to create the greatest emotional impact. In particular, Thomas’ backstory is given great treatment through Murphy’s art.

Punk Rock Jesus is heading towards an epic conclusion, especially due to the change in scenery at the end. I’m hoping that the finale will be as satisfying as the rest of the series, and while Murphy has started to tie up some loose ends, he’s still left enough open for the last issue. I’m sure the end will be satisfying, but I also have a bad feeling about Chris. I don’t think this savior will fare as well, either. 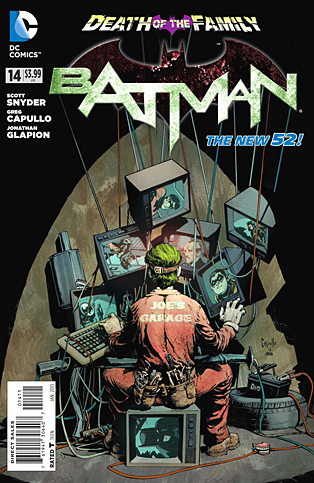 Every comic fan knows the Joker as Batman’s greatest enemy because of the foil he provides for the character. Both men are fans of terror, but Batman uses fear as a tool while the Joker uses it as a weapon. In Scott Snyder’s hands, the Joker is ferocious and frightening and truly Batman’s greatest villain.

What makes Batman #14 so good are the strong character interactions. While the Joker is the main villain of the book, he only appears at the climactic moments of the story. Before that, he’s mostly an ever-present force, but one that is never really visible. We’re only witness to his violence.

The finale of the book sets up the “Death of the Family” arc. But the more interesting aspect is the Joker, who is wholly captivating in his first real introduction. He’s enthralling and mesmerizing, and every panel in which he appears is instantly gripping.

Greg Capullo’s imagery only aids the madness of the tale. There’s a moment where a major character is poisoned by the Joker, and he just starts bleeding all over the place. To say this is chilling is an understatement, especially with Capullo’s styling. The crazed and twisted ways in which he depicts the Joker only the make the character scarier, and because the Joker’s face is attached by hooks, the level of intensity only gets greater further on in the story.

Scott Snyder’s writing is fantastic, and to see him take on a character like the Joker – and to do it so well – is an indicator of his skill. His artistry is impressive, and the comic is greater because of the level of menace Snyder injects. I’m totally on board with this series and I have no idea where it’s going, which make reading the comic so much fun.

Because if there’s one way to keep a comic fan coming back, it’s to keep him guessing. 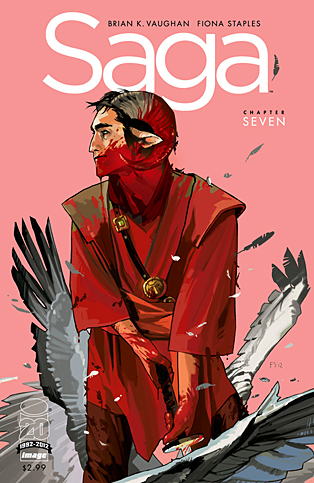 Bannen’s Book of the Week: Saga is the kind of book that makes you glad to be a fan of comics. Brian K. Vaughan has created a rich, eclectic world of original characters, and Fiona Staples has been the perfect complement with her sleek and inventive art. I was pining for it during its short hiatus, and now that it’s returned, I can’t begin to explain how excited I am.

Vaughan’s innovative storytelling has been on display in the previous issues through the random strangeness of the science fictional world Marko and Alana inhabit, but Vaughan only hinted at the depth of the conflict. I bring this up because Saga #7 opens with a brief history of the war that brought the protagonists together. This is also important due to the crux of the next arc: Alana meeting Marko’s parents, both of who were believers in the battle.

Additionally, Vaughan is a master at dialogue and characterization. There are so many fun character moments in the book that it’s evident how much thought Vaughan put into the story before writing it. Every detail is fleshed out, and where he’s only scratched the surface, Vaughan elicits the kind of confidence that makes reading the comic both an impressive and enjoyable experience.

And what can I say for Fiona Staples’ art except that it’s gorgeous, and the book is better for it. Saga is the perfect mix of strong story and talented art, and the book succeeds in every aspect because of the symbiotic nature of its creators. Staples’ character emotions, in particular, are so perfectly depicted that Vaughan barely needs to craft the conflict – he can rely on his artist to show the unwritten.

I don’t think I’ve ever read a series that is continuously this great. Every issue has been stellar, and given how effortlessly Vaughan has been able to tell his story, I trust that the ongoing issues will only get better.

My advice? Buy this book. And enjoy every second of it.