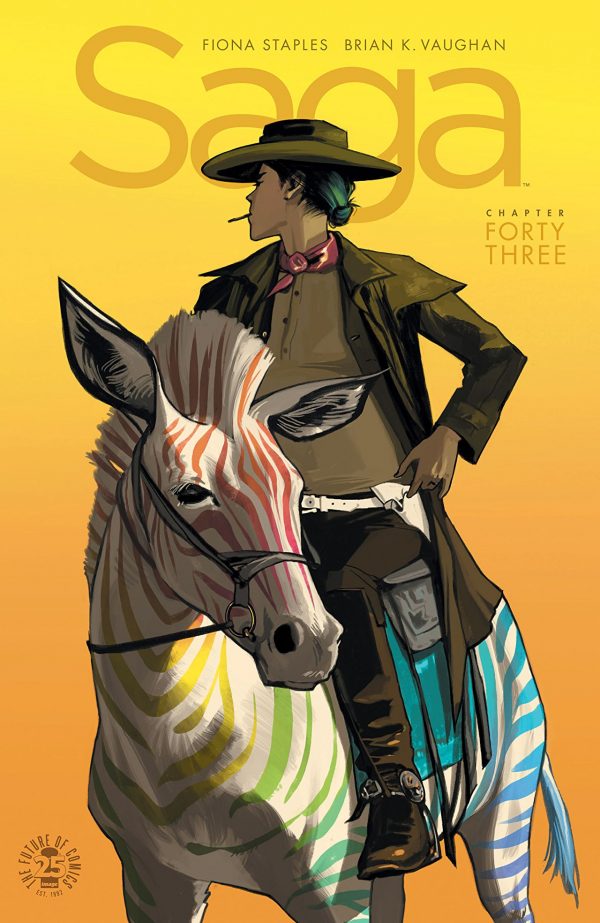 Saga returns after a three month hiatus with the beginning of a new arc and a price tag of a mere 25 cents, in celebration of Image’s 25th anniversary. It also opens with a blunt, in-your-face splash page that serves to inform any new readers exactly where this series’ politics lie.

My review of the last issue transformed into a despairing sort of poem about war in general and the current state of political affairs specifically, and now I’ve got to parse an issue that is ostensibly for anyone and everyone which nonetheless draws the kind of line that divided countless Thanksgiving dinner tables across the U.S. of A this past November.

I have to admire Vaughan’s guts – opening a new arc billed as a great jumping-on point for newbies with a giant sign reading “Welcome to Abortion Town” is bold. 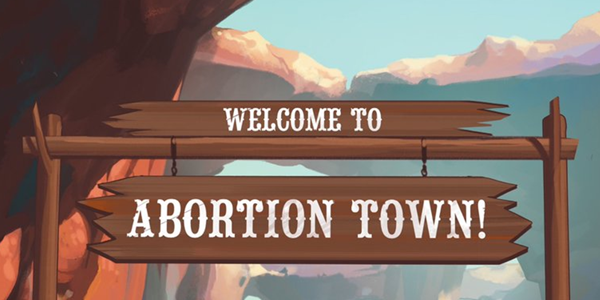 After welcoming us to Abortion Town and a skewed version of the American West, Vaughan serves up a deft recap of what’s transpired in the space-faring saga (heh) until this point, and when I say “deft,” I mean it. Many issues of Saga open in the voice of a now-adult Hazel (the child of the two main protagonists) framing the story as the ruminations of her childhood adventures with her mom and dad, so it took me a second to realize issue #43’s version was an expository catch-up. I often judge writers on how well they handle exposition, and with this issue I give Vaughan a 10 out of 10, would pay at least 25 cents again.

Speaking of Hazel’s mom, Alana displays some impressive new talents in this issue, with some hints dropped that they may be related to the reason she was visiting Abortion Town in the first place. I’m intrigued and a bit wary of this particular development, but I’ll make the choice to trust Vaughan for now. His work on Paper Girls has convinced me it’s a pretty safe bet.

Elsewhere, one of my favorite characters, Petrichor, gets an especially poignant scene with the seven-year-old Hazel, and she fields one of the kid’s explicitly invasive questions in the frank and straightforward manner for which we’ve come to know her. She manages to be simultaneously empathic and funny, to boot, which is more than even a child asking Hazel’s question deserves, evidence of the level of grace Petrichor must possess just to make it through the day, probably. This is Saga wearing its politics on its sleeve, almost as a dare to new readers: can you hang? So, can you? 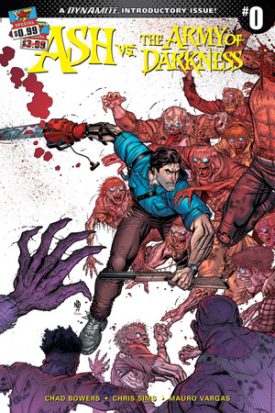 The story of Ash Williams is strange yet straightforward. As this issue brushes through us you get the broad strokes: man goes to a haunted cabin, finds an evil book and fights demonically-possessed people, is teleported back to Medieval times to fight even more supernatural terror, thinking he’s solved the demon problem arrives back in the present day to continue his humdrum groovy life, then discovers that the demonic possession is still rampant. Due to rights issues between Sam Raimi and MGM certain elements are elaborated on in this story more than others, mainly the stuff introduce in Army of Darkness. This comic book is essentially the proper sequel to Army of Darkness that picks up right where that movie left off, and it’s a perfect jumping-on point for anyone looking to get into reading about Ash’s adventures in comic book form.

Previous iterations of Ash in comic books have always been pretty fun, with writers understanding the voice of the character and bringing as much as they can to the table without the legendary presence and gravitas of Bruce Campbell to help them along. The only problem is that the adventures Ash found himself in seemed like little side quests in the ongoing saga. I love the TV show Ash Vs. Evil Dead, but even that feels like an alternative universe that tends to ignore anything that happened in Army of Darkness due to pesky rights issues with MGM studios and Sam Raimi’s people. Interestingly enough though writers Chris Sims and Chad Bowers bring up many of the same questions concerning Ash that the TV show does: mainly what does the rest of society think of him?

In one sentence from the comic: “A deeply unpleasant man who was, nevertheless, pretty okay with a gun.” Ash loses his S-Mart job over the incident at the end of Army of Darkness where he kills the Deadite-possessed woman while on the clock. Many in his community sees him as a trigger-happy vigilante/serial killer who has murdered a large number of people. At the same time there are people who realize that demon possession is quite possible and wish to employ him as an expendable agent to fight this evil. Generally it’s Ash stumbling into these adventures related to the Necronomicon, so it’s always interesting when someone seeks him out for help, rescuing him from his life living in the shell of his bygone youth consisting of beer, hard rock, TV, cheap flings and deep down loneliness.

It turns out the possessed woman Ash killed was a librarian at the local high school, and the Vice Principal from the high school has come to see if he would substitute at the school because of increasing incidents involving freakish violent behavior. In other words, hilarity and ass kicking will ensue, in a plot that I’m surprised hasn’t been explored before. Since Ash is a man who lives in a state of arrested development it’s funny seeing him interact with people of a similar maturity level like teenagers, and an environment like a high school it presents a great stage for action and comedy. Not only that but an opportunity to introduce a diverse cast of supporting characters for Ash to bounce off of, or to be dismembered in clever ways. Chad Bowers and Chris Sims have been on a nostalgic tear recently with the fantastic X-Men ’92 series for Marvel and the recent Swordquest opening issue, which I also gave a favorable review in this feature. They possess a skill with handling nostalgic properties, where they tell new and forward stories while occasionally flashing visuals that will make you smile.

In the past sometimes these nostalgia grabs can go the wrong way, and rely too heavily on jokes and not deliver so much on plot. This includes previous comic adaptations of Ash’s adventures. It’s great to see a storyline that not only captures the character but also has a fun plot that feels like it’s doing something new with the familiar. The artwork by Mauro Vargas adds to this, and I get a feeling we’ve only seen glimpses of what insanity his hands will yield. From what this issue shows his artwork is somewhat cartoony and elastic, perfect for the spidery Deadites and rubber-faced Ash.

If you’re a fan of Ash Williams and his misadventures check this issue out, it’s a quick read but a fun one. It’s also only 99 cents!

“Isolation” – The Girl from the Other Side, Vol. 2

A Strange Hill to Die On