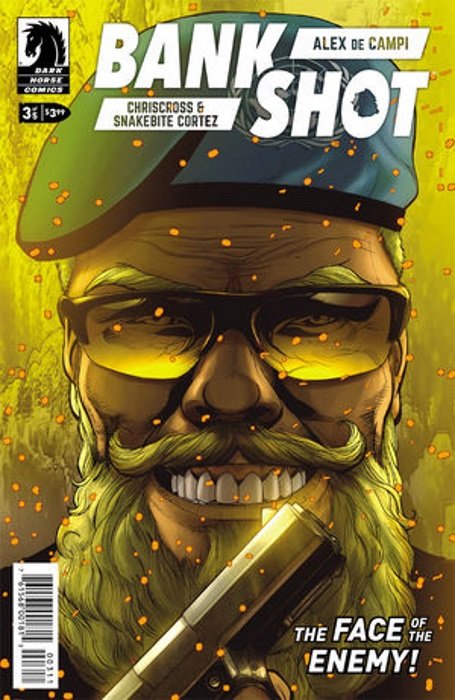 Marcus King is a man on a mission: find and take out the Dutchman, a nefarious bastard if there ever was one. The Dutchman is responsible for nearly crippling King. But King’s singular vision and focus might be his downfall and might bring death to those closest to him.

There is a whole lot of action in issue #3, more so than in the barn-burner that was issue #1. The action is so furious that the issue blazes by, which seems to be its intention. Hails of bullets, crashings through windows, stabbings and a man gets shot in his no-no spot… Bankshot is brutal, make no mistake. And we find out there are ways to take down a man fortified by nanites (spoiler alert: electricity!)

The gloriously mad creator/Doctor Frankenstein-as-writer Alex De Campi continues to top herself with each title she releases. Whether it be Smoke, Archie vs. Predator, her entries in the Grindhouse series or (my favorite) Mayday, once you start one of her tales, there’s no turning back allowed and you can’t un-see what she forces you to watch.

The team of Chriscross (art) and Snakebite Cortez (colors) – who I’m still not sure aren’t just characters from a De Campi book – bring it all to life with cinematic flair. The duo ably lights scenes, and this issue has more than a few scenes taking place in entirely dark rooms, where our only glimpses of action are by gun burst or explosion.

Although Bankshot is winding down (it’s only a five-part mini-series) I don’t think the action or intrigue will. I expect dangerous twists and turns (and also punches to the face, as promised in the first issue) through to the last panel of the last issue. There is a good chance Marcus King won’t make it. This isn’t a spoiler by any means, just a feeling I have. So let’s see where the crazy train that is Bankshot takes us! 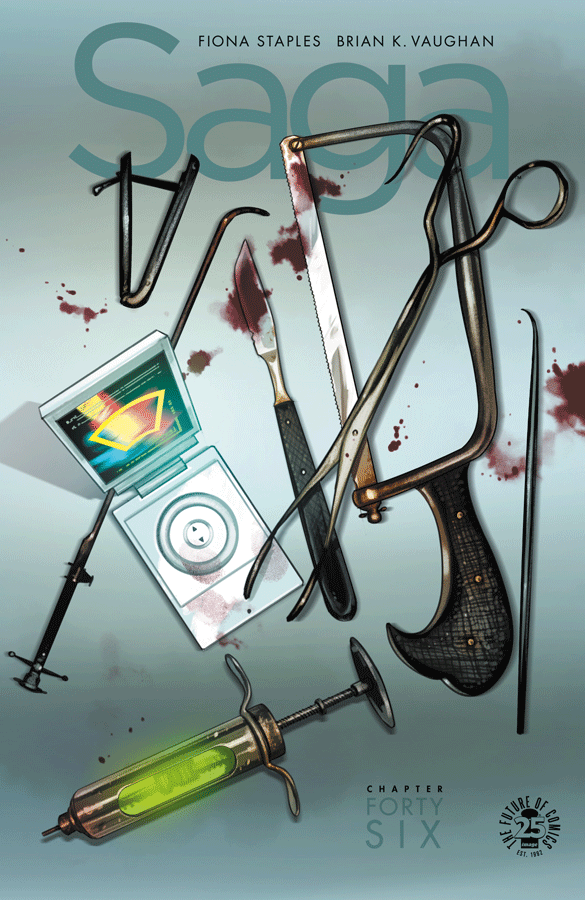 Saga‘s becoming a book that’s harder and harder for me to review. Even more than other titles, it’s not the kind of book a reader can jump into at any issue. An issue like this one, where characters are paired off for mostly philosophical conversations, is so greatly informed by an intimate knowledge of each character’s history – almost all of which are long, as this story really is, ahem, a saga – that I almost don’t know where to begin with an analysis.

The only way out is through, I suppose, so I’ll start at the beginning. Most of the issue’s action and its minimal forward momentum comes from the fallout from Prince Robot IV’s rescue of Petrichor from the clutches of bounty hunters. Their conversation after the baddies are finally dispatched is satisfyingly tense considering their and their people’s shared history, as is the final “twist” at the end of their scenes.

I’m always happy to see Prince Robot IV, not only because of his ongoing character growth, but also because Staples never fails to use the screen of his monitor-shaped head to telegraph the flashes of his unconscious thoughts. This practice can be both illuminating and obfuscating, as in a pivotal moment before the issue’s final splash page.

Meanwhile, Marko, an unconscious Alana, and Hazel are dealing with the menacing wolf they met at the end of the last issue, and while further conversation takes some of the edge off that menace, it still isn’t entirely dulled, which creates some nice anxiety for the well-being of our core family members that will carry us through to the next chapter.

Marko and the wolf, who refers to herself as the Endwife, have a political discussion while prepping Alana for the late-term abortion she desperately needs. It’s an illuminating one, as it helps to explain why the über-pacifist Marko is nevertheless so adept at combat, and doesn’t shy away from the hypocrisy at the root of those seemingly irreconcilable character traits.

Once the Endwife begins the procedure, the action re-centers on Hazel and the magical projection of the child Alana’s dead fetus could have been. There are some beautiful musings on memory here, and indeed, some of the more beloved characters that we’ve lost are remembered through Hazel’s recollections. The scene reminds us once more of just how much Hazel has already lost in her short life, culminating with the slow fading away of her impossible brother. The final panel in the sequence is Hazel sitting alone on a giant, antique sofa in a stately manor house, a child dwarfed by the trappings of an adult’s concerns.

Issue #46 doesn’t provide a whole lot of forward narrative movement, but it does treat us to a richer understanding of a few of our core characters. As we learn from each of their asides, history informs the present, which will soon enough become the past, and only those with the courage to interrogate what came before can truly hope for a brighter future.