The fan is quick to proclaim they so love their favorite series because they’ve grown attached enough to the cast that they consider them something like friends and each new installment of their adventures a new play date. It follows, then, that characters should always be friendly, a group of confidants at your beck and call who can only offer comfort. It likewise follows that they’ve no time for the frustrating, for the vague, for the challenging, no matter how fascinating or 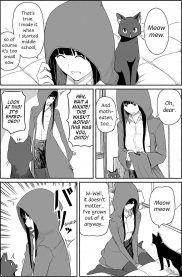 revealing such characters may be; these surrogate companions must before all else be likable. If they’re an ax murderer or serial killer, that’s all to the good so long as they’re a lovable serial killer, charming and pleasant to listen to. The only sin one can commit in this mode of relationship is the sin of being unlikable, but it’s a mortal sin, grave enough to condemn everyone and everything in proximity.

The cast of Flying Witch are not like any group of friends I have ever had, nor are they like any group I would want to spend time with. They’re too simple, too flighty, too far removed from anything like trouble or concern to hold my interest or provide an emotional bellwether. Inukai may bear a grudge against Makoto’s older sister for transforming her into a weredog, but it’s presented as an adorable friction between them, not as a dangerous hate; Nao is petulant, shallow, yet her incessant whining never earns more than a groan of tolerant acknowledgment from her companions who seem to find her whinging cute. They are not dynamic characters, growing with time, nor are they well developed, their psyches interwoven and complex systems. Like their surroundings these people exist in a state of untroubled isolation, no problem so great that it won’t pass with the closing of the day, no burden so heavy it can’t be sloughed off with an ironic ending and a hearty laugh. I do not look forward to visiting them the way a fan might.

Which is not to say that I don’t look forward to visiting them at all. Far from it. Flying Witch remains the most consistently pleasant work on my pull list in large part because of its cast. But the fan’s conception of worthy characters is built on mistaken assumptions. Characters in a story cannot give us what we seek in friendship; the relationship they provide us is wholly one-sided, without the interaction that is so essential to the formation and development of even our most shallow companionship. Similarly, these are static relationships; a character must, 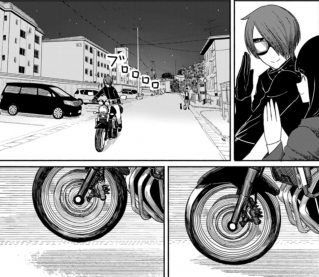 at some point, come to the end of some arc while we continue on in time. To confuse the most basic element of it for the whole and to then conflate that shallow misunderstanding of what we want from characters to what we desire from other people is to take on a warped and deeply limited view of reality in the process, one that reduces our conception of any relationship to something merely transactional. It not that this kind of relationship we seek from fictional characters is without power or purpose, only that it is distinct from what we can and should expect from flesh-and-blood men and women. The relationship we cultivate with those characters we follow is more like the relationship of the voyeur to his subject than of a friend to friend, an invasive and oftentimes violating dynamic we would do well to keep in mind lest we mistake it for something it cannot be, or to take it more flippantly than it deserves.

The pleasures in this observation are not in merely watching, in salacious accumulation of knowledge about an unknowing subject, but rather in the opportunities to attune our eyes to a finer appreciation of character and behavior and bearing and so a richer understanding of the world before us, all things artist Chihiro Ishizuka has taken extreme care in Witch to convey even in this fourth volume. The formula remains unchanged, yes: Makoto and friends engage in a number of silly antics as languidly paced and as low-tension as those in any earlier volume, while two new members of the cast – leather-clad, motorcycle-riding, witch-mentor Akira and the simultaneously adorable and horrifying spirit Beachy –sneak onto the page in predictably adorable introductions. There are moments of lyrical beauty, as when Makoto and Inukai traipse onto the beach at midnight, and instances of the disarming cuteness the series is known for, as when a bumbly buzzy fuzzy bee clamps its darling pincers down on Makoto’s pinky, but as always what is best in Ishizuka’s world is the attention to even the most delicate of details, something nowhere more pronounced than in Makoto and her coterie. 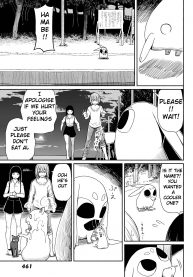 There is real joy in watching Makoto strike poses as she walks down the empty streets of her town at night, a finely observed sense of comedic timing as much as an understanding of how a goof free of pressure might feel free to stretch themselves into unfamiliar and bizarre shapes and the joy they find in extending beyond their own limited sense of personal bounds. It seems absurd to say, but there’s pleasure to be found in the uncertain little bend of Nao’s fingers – still untested, still not certain she’s quite got the form right – as she learns to hold an onion just as there’s something to relish in finely sketched buds and leaves dotting the branches in a sprawling apple orchard. No, what Ishizuka offers are not the complex and full human beings we’ve seen in Oshimi’s Happiness or in Inio Asano’s body of work, but she possesses an exacting attention to minor details of form and posture and movement that convey an encyclopedia’s worth of information on their own. It’s not magic necessarily – I still cannot buy the idea that Flying Witch somehow reveals the magic hiding in a world it has almost no real bearing on – but there is something unique in Ishizuka’s finest observations that lends this and all volumes of Flying Witch a distinguishing value. Something that causes one to stop and pay even a smaller bit of attention if not to the world around them then at least to the world on the other end of the page, a world full of people we may never know as friends but whom we recognize as instantly as we might the clerk we pass every day on the way to work.

Unwinnable Listens to the Best Music of 2017 – Part Three